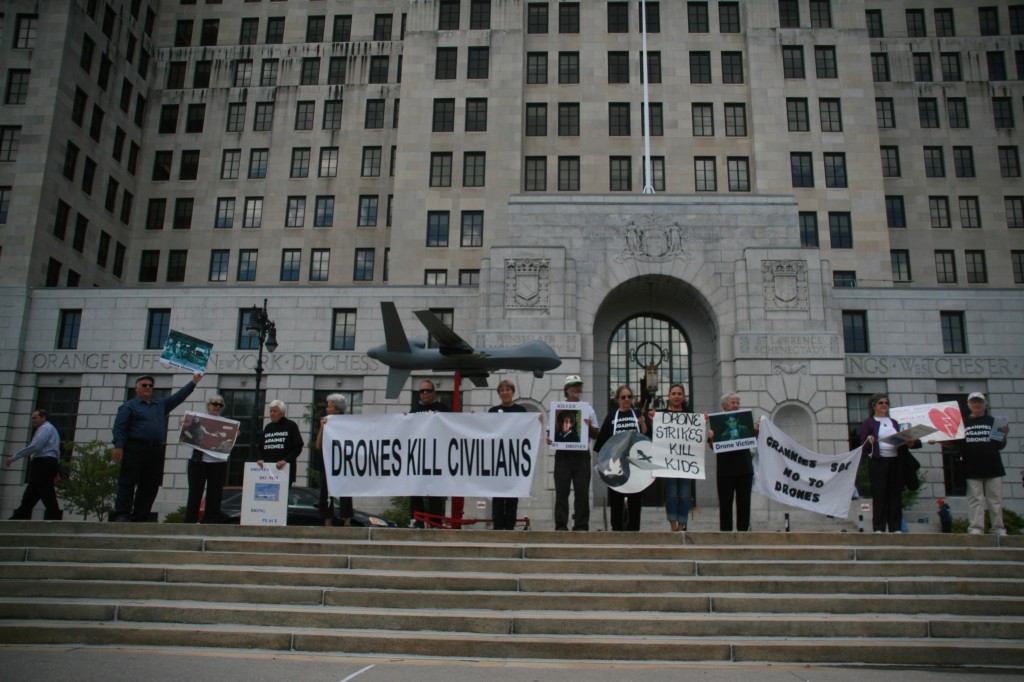 The early part of our vigil with the Alfred E. Smith building in the background

This was the Grannies major anti-drone vigil of the fall season.  It was fairly elaborate because we had a large variety of props and banners.  Outstanding among these were Mabel’s enlarged photos of drone victims, Kim’s beautiful yin/yang, dove/drone poster, origami drone mobiles put together by Kim and Joan, and a variety of banners and other signs. 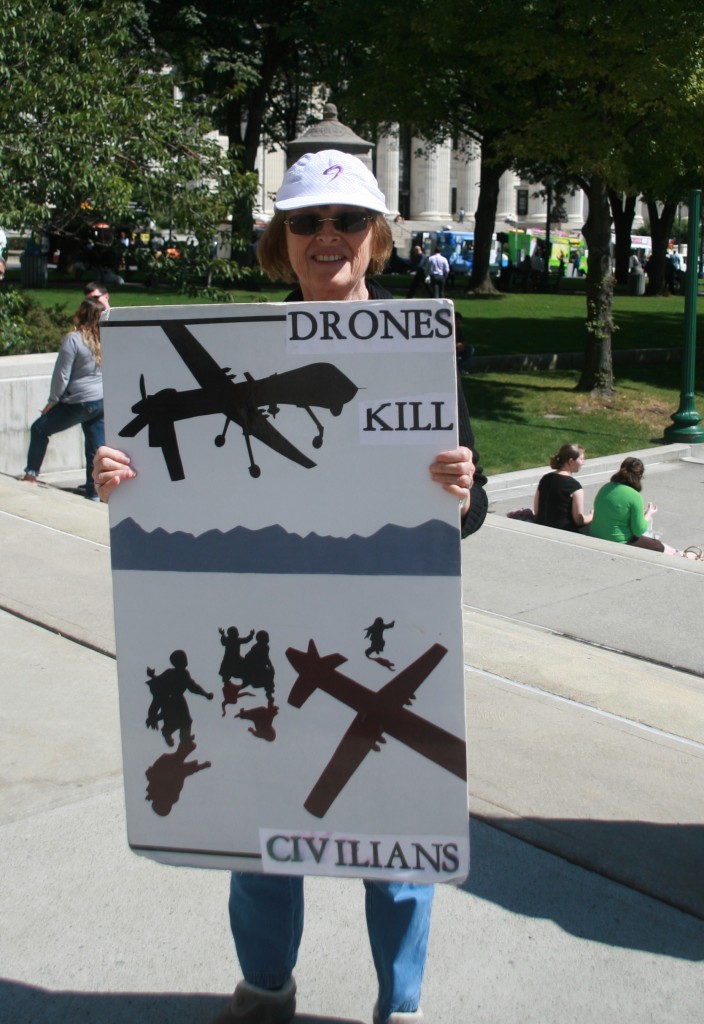 One of the most striking props was the 1/5 scale MQ-9 Reaper drone replica designed by Nick Mottern.  His replicas are slowly increasing in numbers, as he receives funds and takes time to build them, and are traveling to protests all across the US where they capture the attention of passersby and help educate them to the physical effects of having such weaponized drones flying overhead. 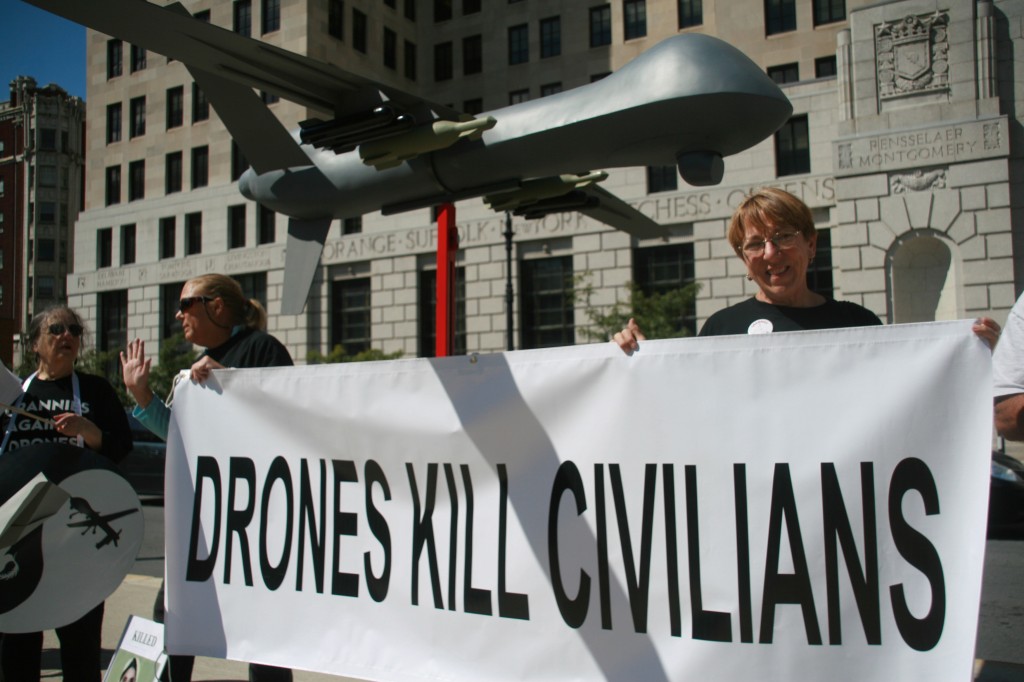 To be able to include the replica in our vigil, Mabel and Mickie needed to meet Nick halfway in Newburgh the day before the vigil to get the parts, and receive instructions on assembly.  Then we needed an assembly team with patience and Phillips screwdrivers.  We met early to put the parts together. Our intrepid team consisted of Kim Kennedy, Pete Looker, Joan and Harry Thornhill, Bertha Kriegler and Mabel and Mickie. 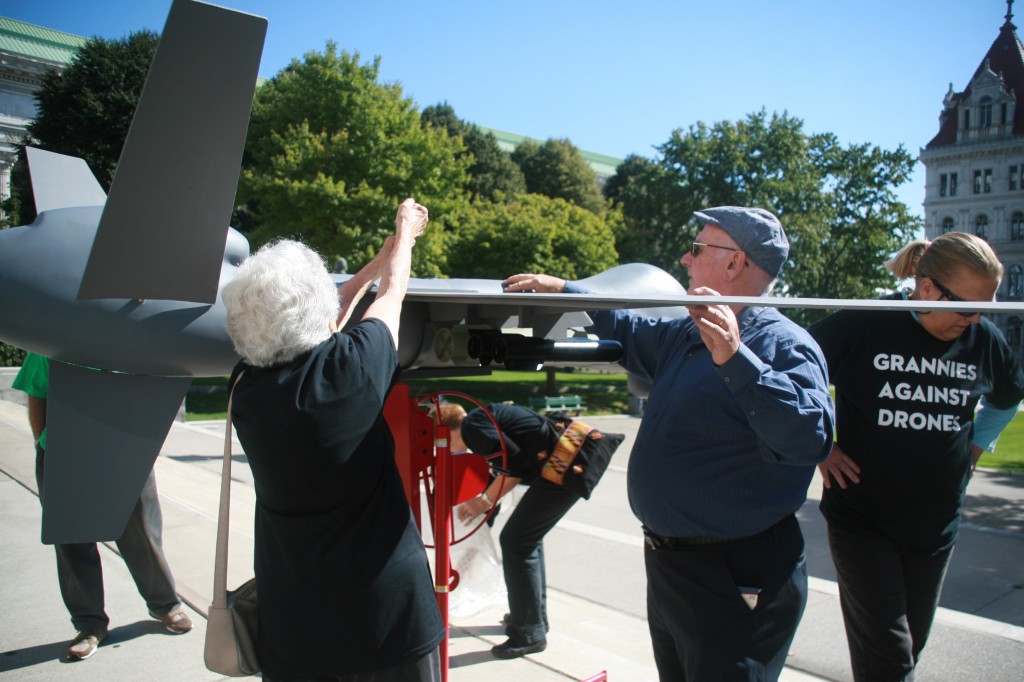 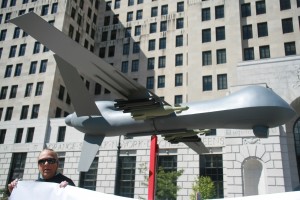 As soon as we were done assembling the replica we began our vigil about 15 minutes earlier than scheduled. At the Noon hour we had about a dozen vigilers. Many of our signs were still propped up against steps and monuments in the park. 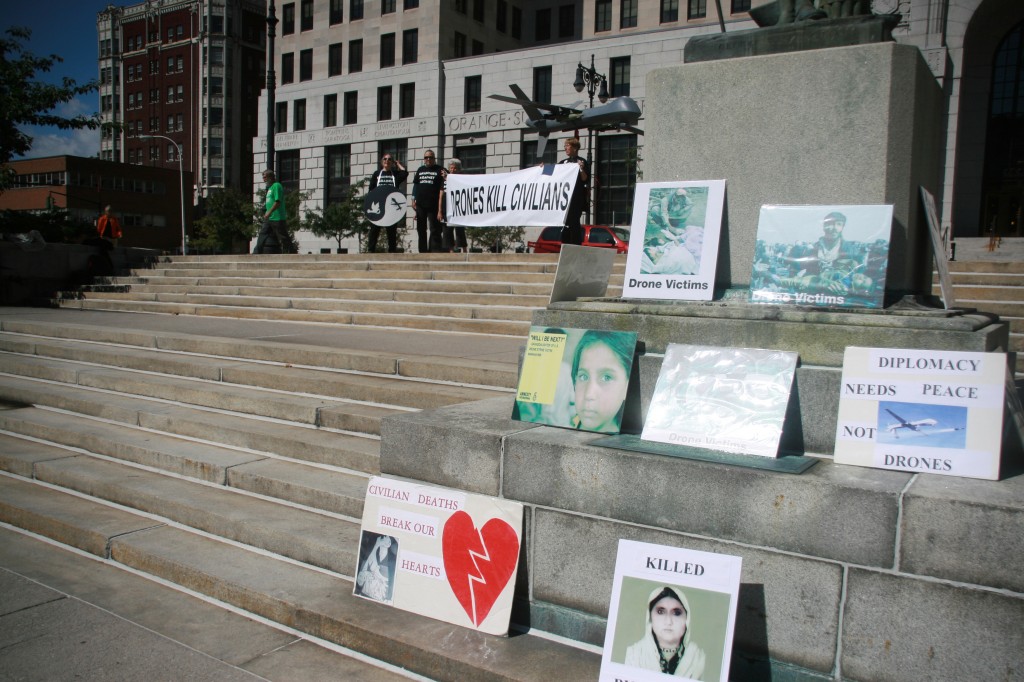 By the halfway point of the vigil we had grown to 21 vigilers and were able to face both the park where the State workers were eating lunch, and the traffic and passersby on Swan Street. 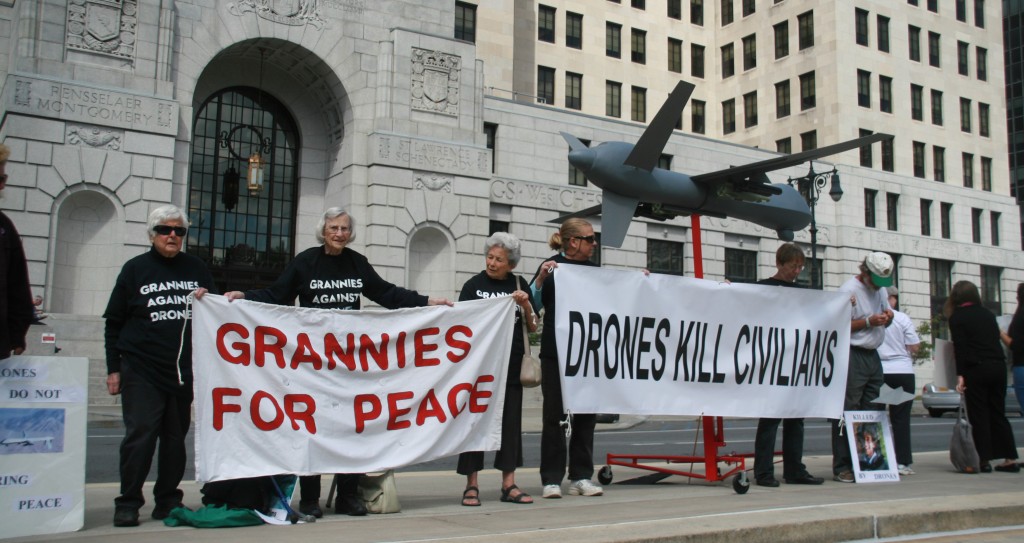 As soon as Doreen arrived with our leaflets we began leafleting, This resulted in our holding some interesting conversations with passersby, and with people eating lunch in the park where we also leafleted. 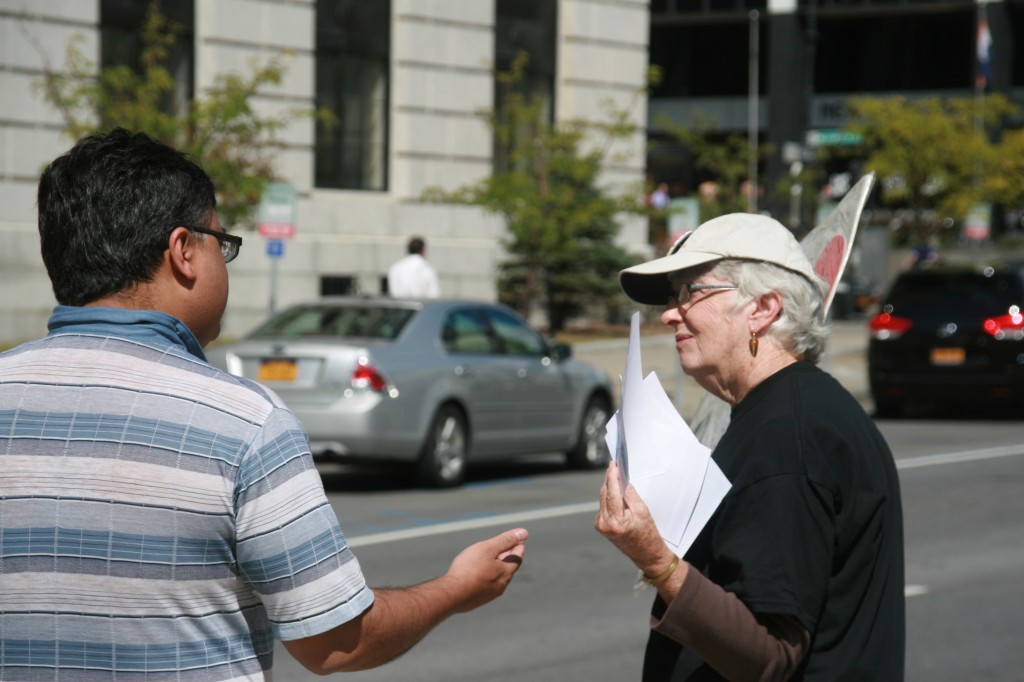 We were able to document much of the vigil with Mabel’s photos.  We also added one photo of Mari and Mabel, representing three generations of activism.  It’s becoming an annual ritual to have them take photos together.This one photo was the exception to Mabel’s photos.  Being taken by another vigiler and posted on Mari’s Facebook page. 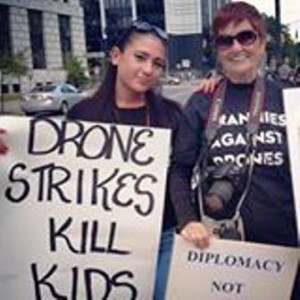 One disappointing, but not unexpected aspect of the vigil was the lack of media coverage, in spite of careful press releases and phone calls to the TV stations on the morning of the vigil.  We did have a photographer from the Times Union who took several photos, and one of our leaflets, but no photos appeared in the newspaper. 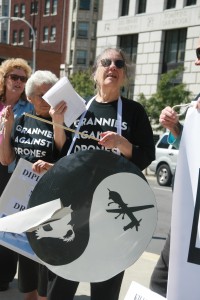 In spite of the lack of media to amplify the message, the person to person communication was excellent.  We were able to give out more than 150 leaflets about how weaponized drones kill people.

Dot described one of her conversations with a passerby this way:

“The gentleman I was speaking with said that bombing and killing as a way of solving the Middle Eastern dilemma is futile and counterproductive.” 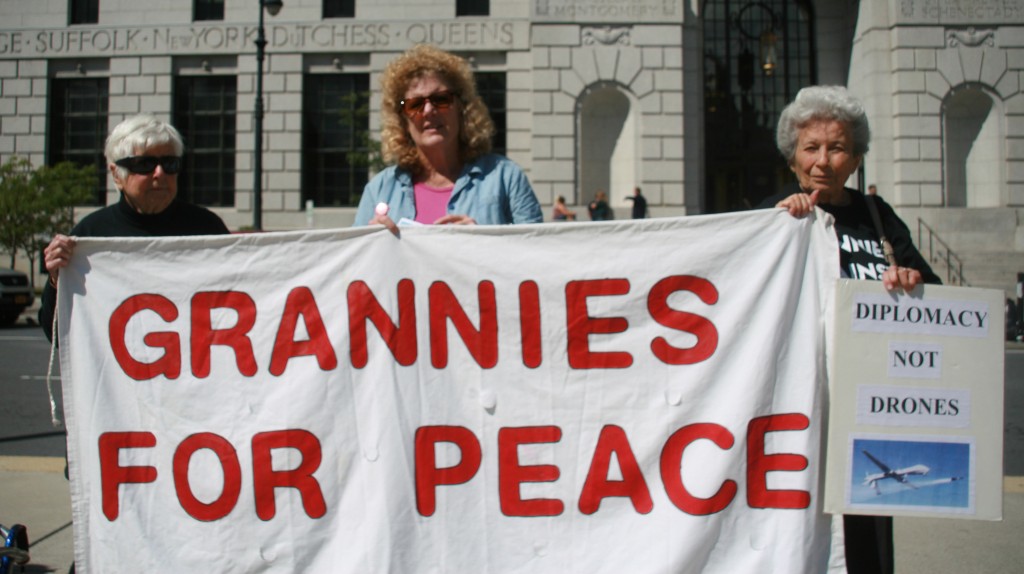 Those of us leafleting and holding banners had a wide range of responses from supportive, to curious, to unconvinced, but everyone thought about the issue of killing innocent people with drones. 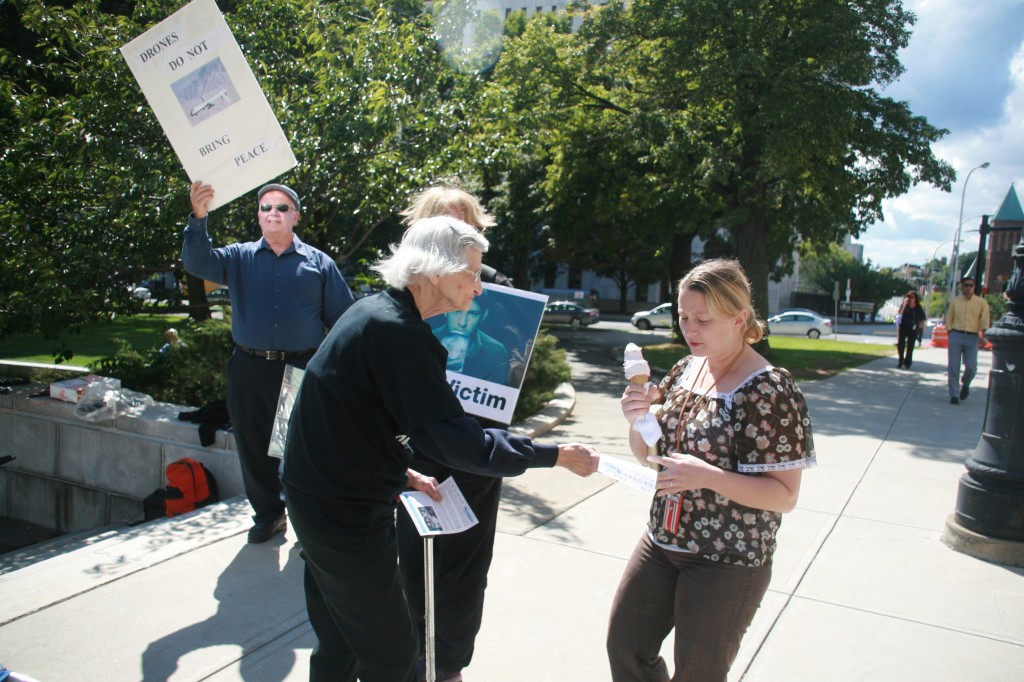 We hope that these photos communicate the spirit of the event, which we all enjoyed on a beautiful, sunny day.  Thanks to everyone who took part and to those who helped to prepare for the vigil and were there in spirit.