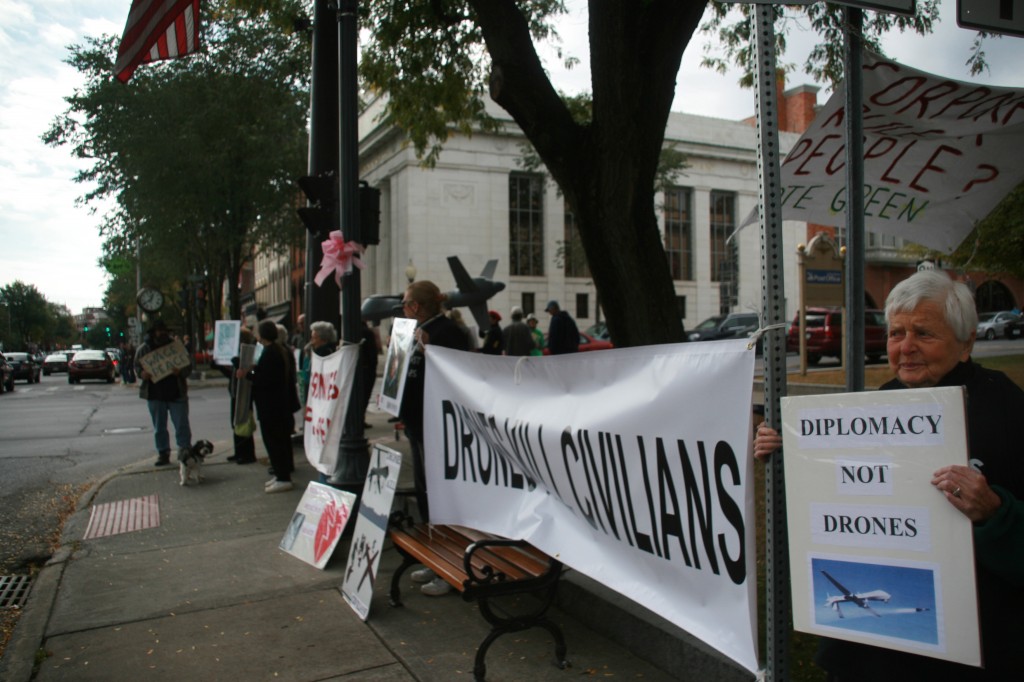 On Saturday morning, October 11th,  at about 11:40 am a small group of intrepid Grannies for Peace met in the Woodlawn Avenue municipal parking garage in Saratoga Springs to assemble Nick Mottern’s  impressive 1/5 scale reaper drone replica in preparation for the Saratoga Peace Alliance vigil.  We also had many dramatic photos, two banners (one the Grannies for Peace banner) and other posters brought by Mabel, who was also our photographer. 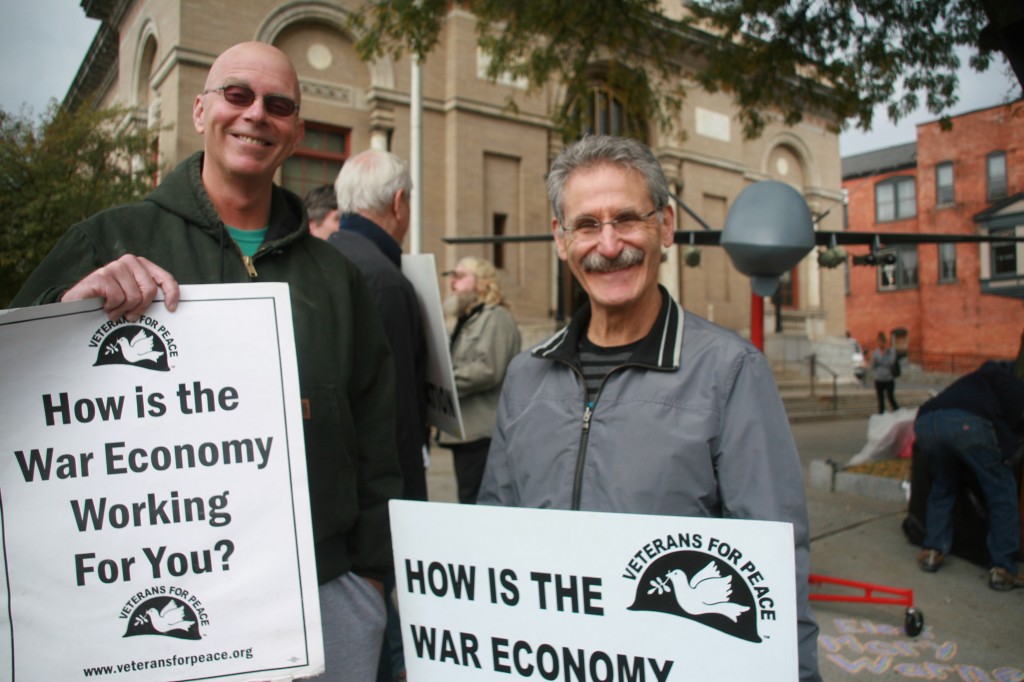 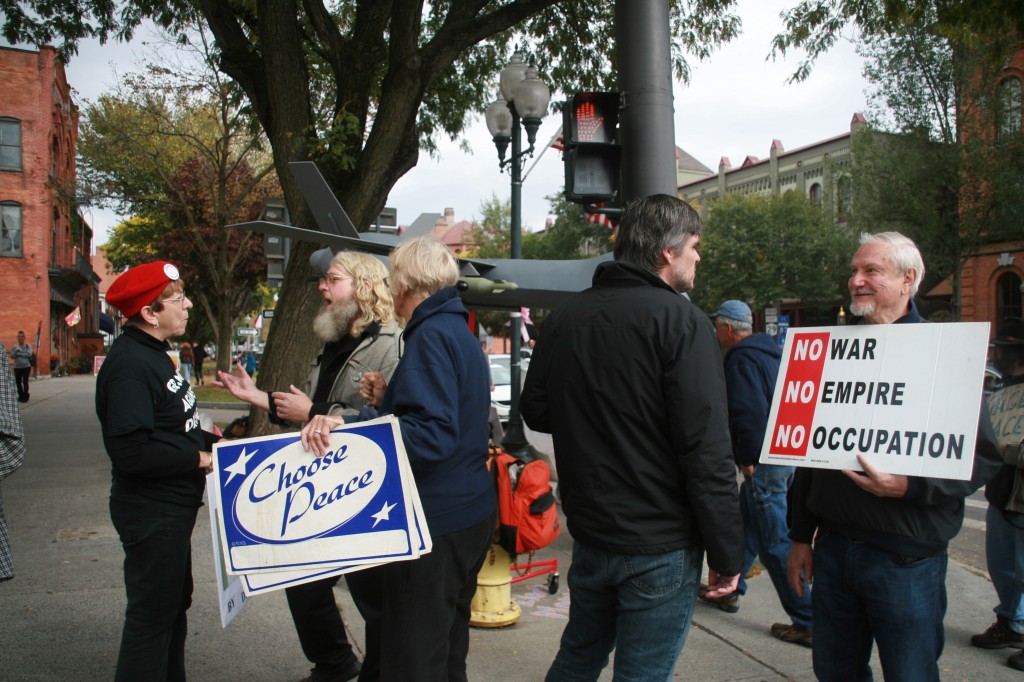 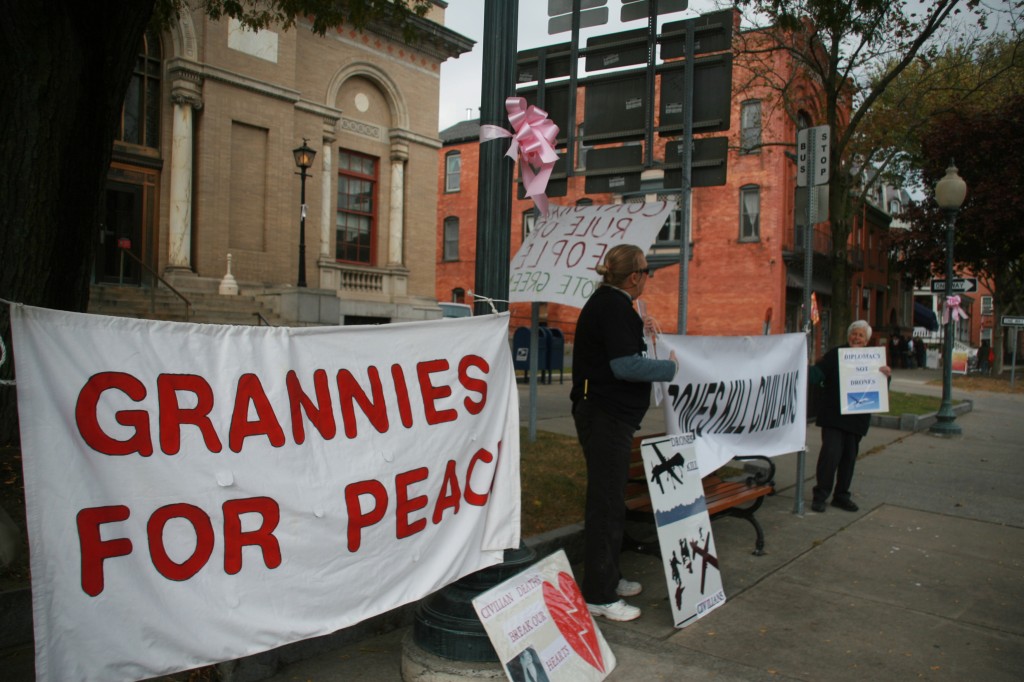 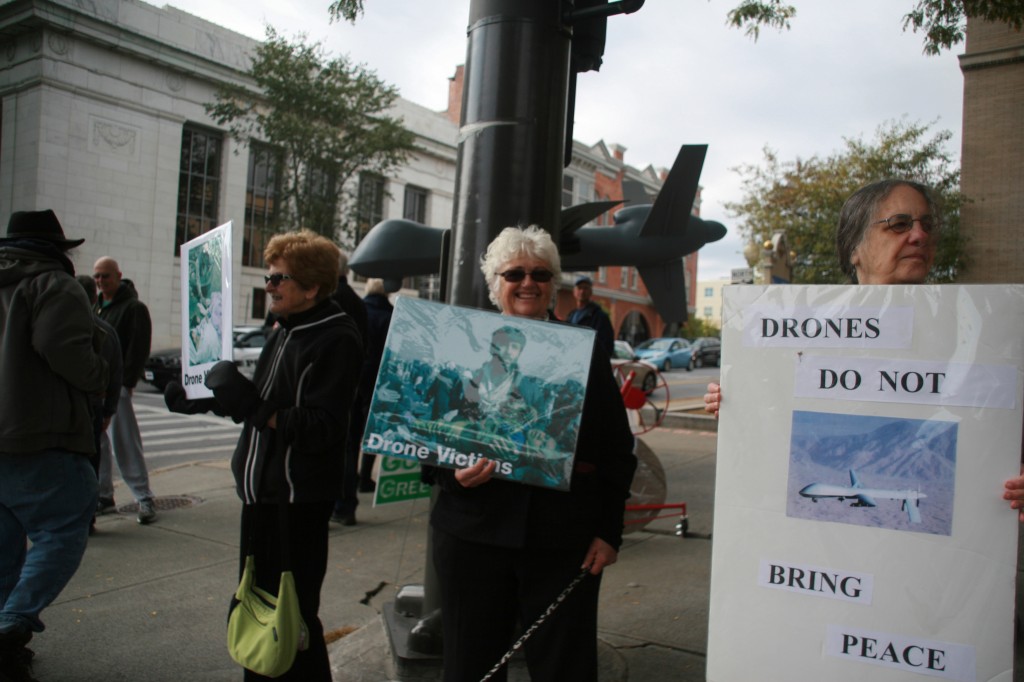 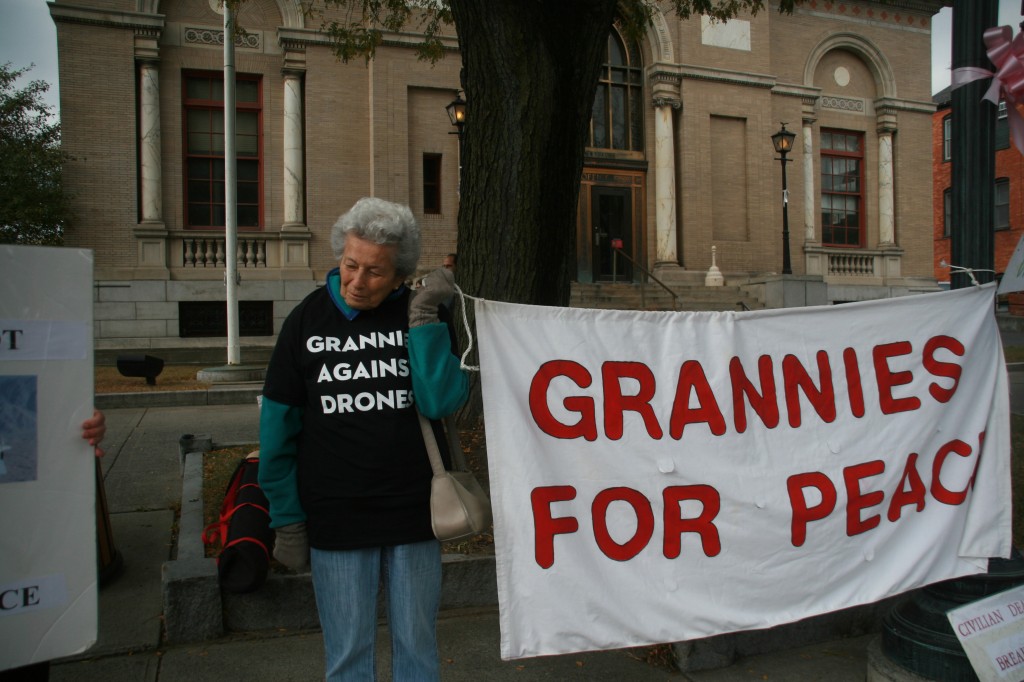 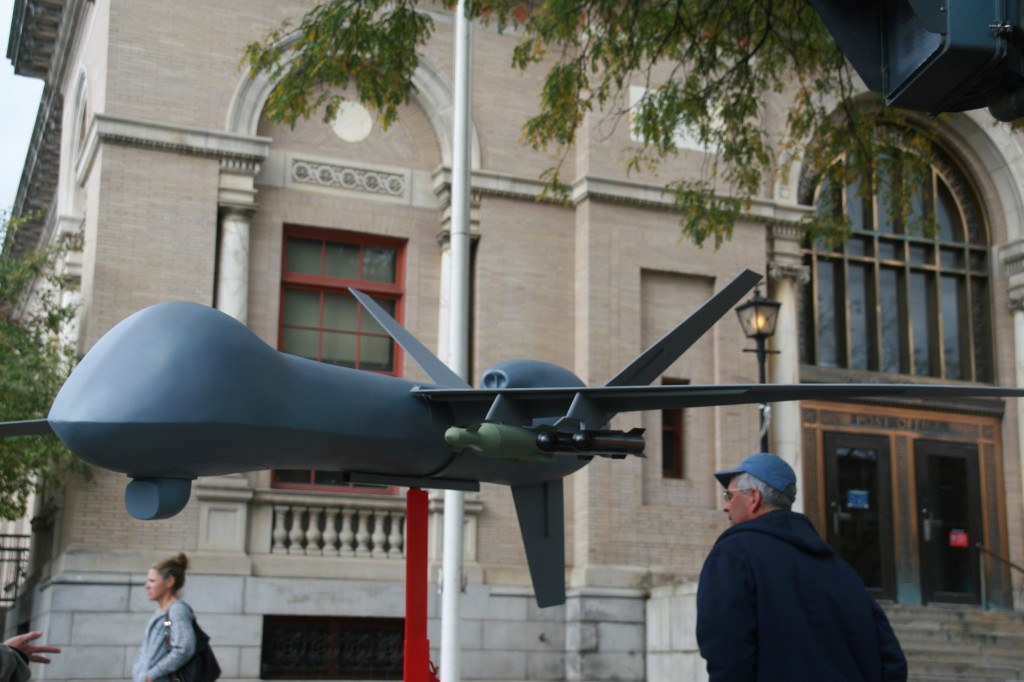 This time we encountered some difficulty stabilizing the wallboard lifter base that holds the replica – in spite of the best efforts of Kim and Joan, our “mechanical thinkers”  – with the encouragement and physical support of Mabel, Bertha, Pat and Mickie.

So we went with plan B.  We carried the partially assembled replica and the parts for the wheels and lifter, along with the wings, fins, bombs and missiles over to the main Post Office on Broadway..  There some of us worked to get the replica set up while others put up banners and photos to began the vigil.

Towards the end of our assembling process, we were joined by the members of the Saratoga Peace Alliance.  A cheerful and helpful group who welcomed us and began to assist in the fine adjustments to the replica. 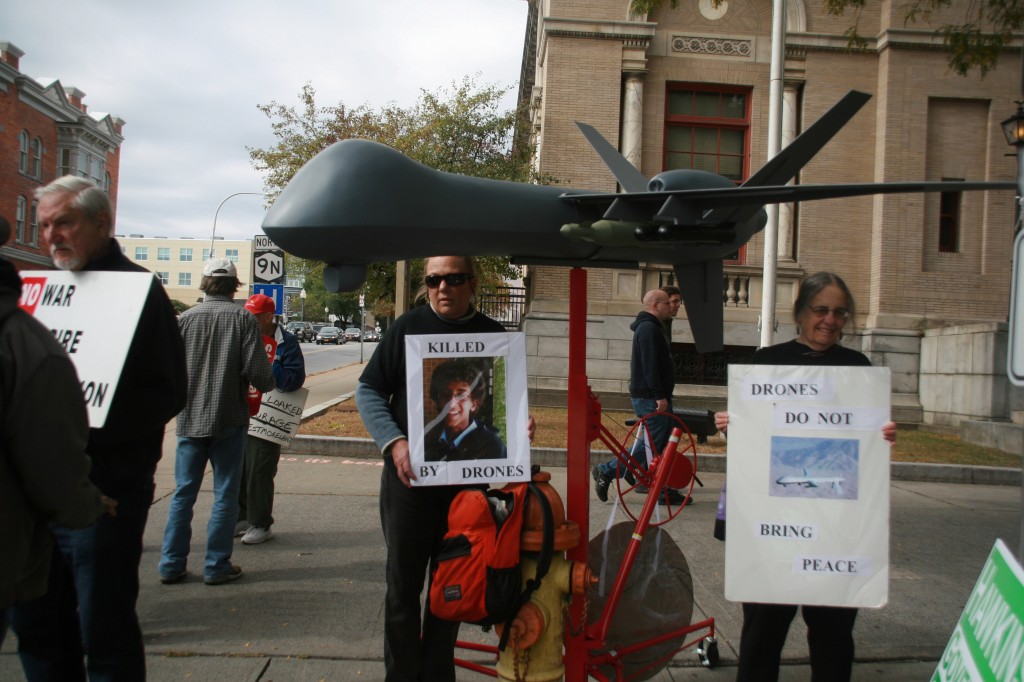 They had arrived from Their “Being Peace” discussion group, and came fueled by coffee and energized by a long discussion that evidently also involved politics as well as peace! 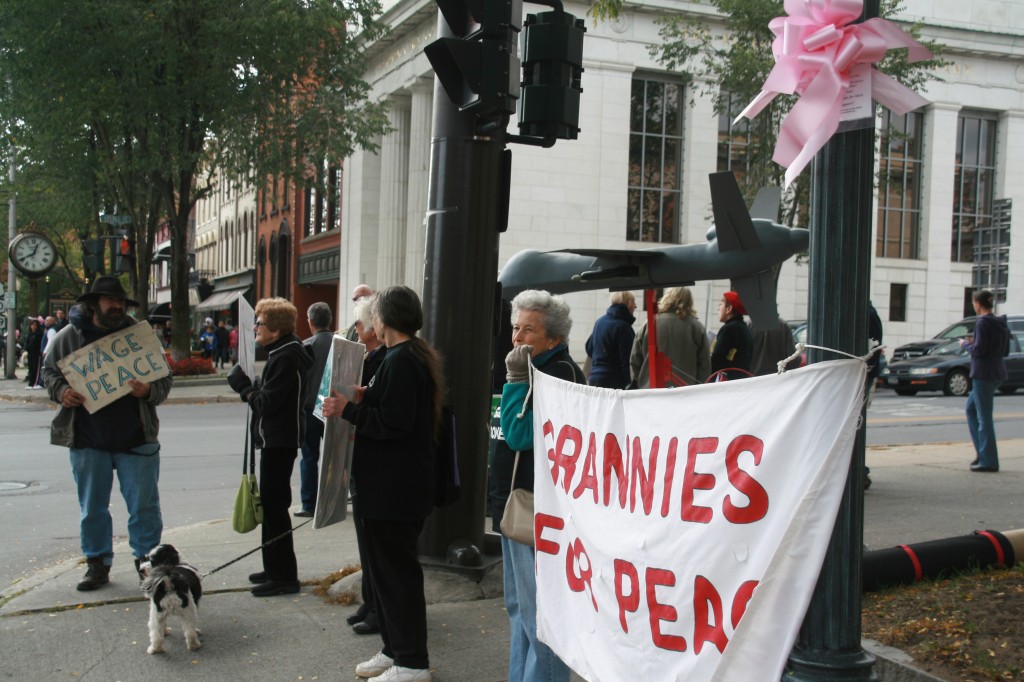 Weather-wise it was a very fine afternoon. There was a lot of appreciation by each group for the other. And some of us saw old friends that we hadn’t seen for quite some time.  We also gave out brochures for the upcoming “Ground the Drones” drone quilt exhibits that will be opening in the Capital District on Monday, October 20th with a media conference at the Legislative office Building in Albany.  More details  about this on our home page.

We had some good interactions with pedestrians and one passenger in a passing car applauded us, which was kind of amusing but also nice.

The vigil ended with a closing circle where each person stood in silence for a couple of minutes and then we went around and introduced ourselves.