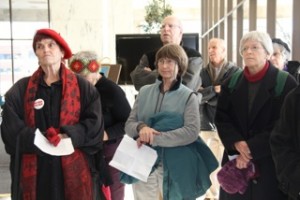 This Wednesday, January 15, 2014, Thirty of us descended on the Federal Building in Albany to protest the fact that our senators, Chuck Schumer and Kirsten Gillibrand, co-sponsored  a bill that would impose more sanctions on Iran — which threatens to torpedo President Obama’s progress in nuclear negotiations. Outside the building, our signs and banners praised diplomacy as a path to making the Middle East more secure and said a loud “no to war with Iran”.

Inside, meeting with the directors of 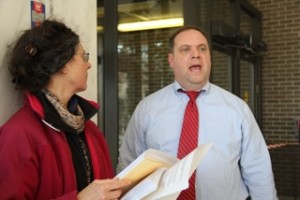 Schumer and Gillibrand’s Albany offices, we enumerated all the bad outcomes this bill, S.1881, would bring. We told them how S.1881 breaks a promise the US made as part of the 6 party interim peace agreement with Iran.

We reminded them that one of the conditions of the six month interim peace agreement just finalized this week was that there would be no more sanctions added during the negotiating process for a final agreement.  And spelled out how destructive it would be to go backwards in a process that is working. We encouraged them to say no to Iran sanctions bill S. 1881. Encourage the promotion of peace through diplomacy!

Our protest on January 15th , called by Women Against War, was part of the National Day 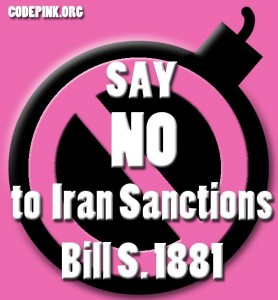 of Action against Iran Sanctions organized by the National Iranian American Council. We delivered 160 letters from New Yorkers that they had collected. The senate bill has been withdrawn in February but we need to be watchful for a new version that could be introduced.

**This post was partially based on a blog post written by Maud Easter on January 17th on our blog, Waging Peace