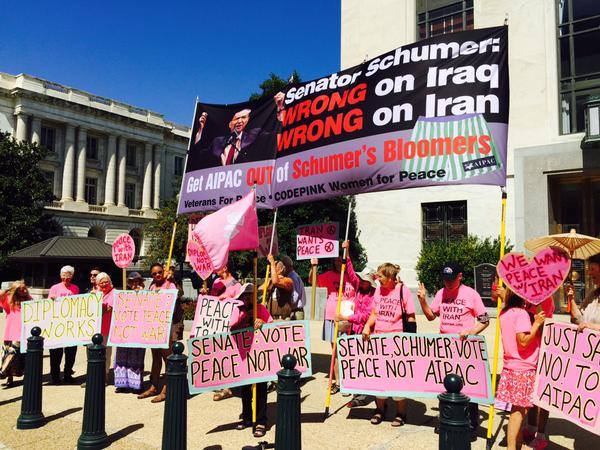 Get AIPAC our of Schumer’s bloomers. Banner at the Code Pink demonstration, in Washington DC on September 8, 2015, photo by Wendy Dwyer

As many local peace and justice groups gathered in front of the Leo O’Brien Capitol Building for the second time.[At a rally called by the Palestinian Rights Committee.]  Urging approval of the Peace Deal with Iran and calling out Senator Chuck Schumer for opposing the agreement, Wendy Dwyer, a member of Upper Hudson Peace Action and Women Against War, brought news of inspiring actions that took place in Washington DC during the launch of the Code Pink campaign “Hands across the Capitol.”

Wendy had been present in Washington, DC on September 8th and 9th and had taken part in several of the visually exciting actions. She also took a few photos which she has shared with us. Other photos come from the Code Pink website and from photographer Jo Freeman. 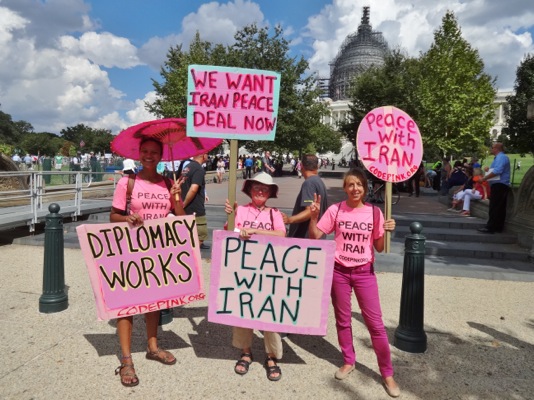 Wendy at the September 8th and 9th Peace with Iran events organized by Code Pink. Standing between Michaela and Medea. Photo by Jo Freeman 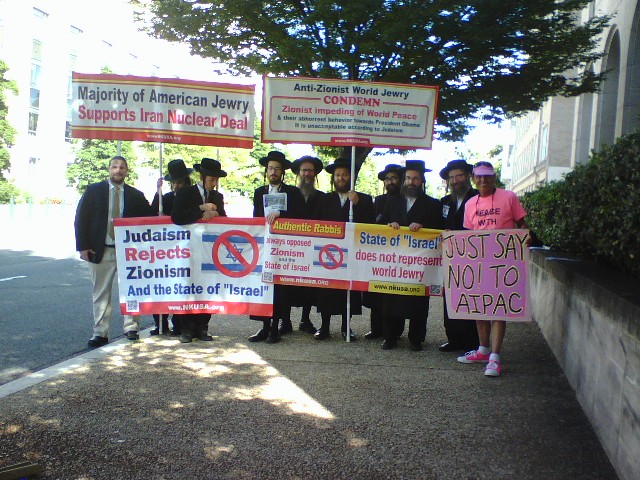 This is just a brief  article about Wendy’s experiences in DC, and Medea’s birthday sign and a general acknowledgement of all the energy and creativity that surrounds Code Pink and supporters of their actions,including Wendy and others from our region.

One of the actions that took place before the group visited Chuck Schumer’s office in the Rayburn building was the hanging of a banner over the balcony nearby, followed by a peaceful sit-in in Senator Schumer’s office: 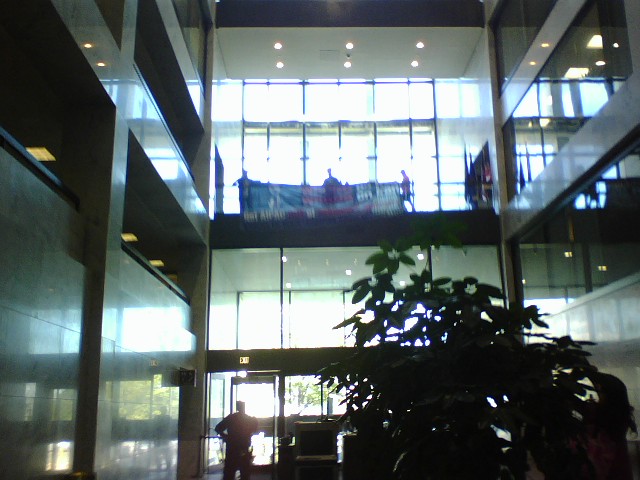 Hastily, we sang in the foyer to divert the capital police while Tarak and others dropped the banner. This was in the Rayburn building, where Schumer’s office is.  I believe it was on the third floor.

We asked to be seen and were told 3 people only and no cameras so we all sat down and started singing peace songs.  British media was there, police were called and came. They know Medea well work with her all the time. 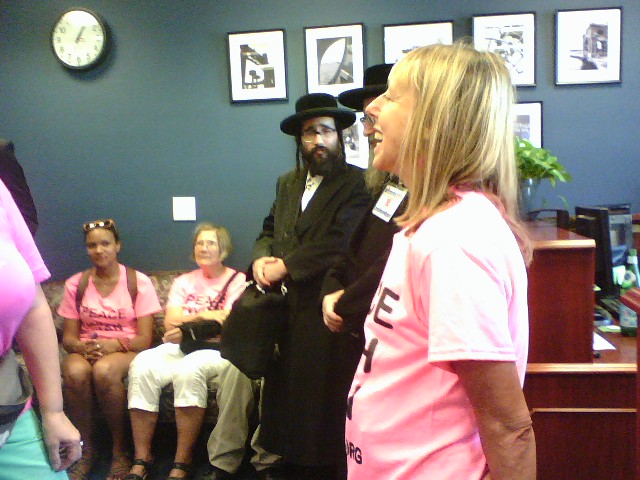 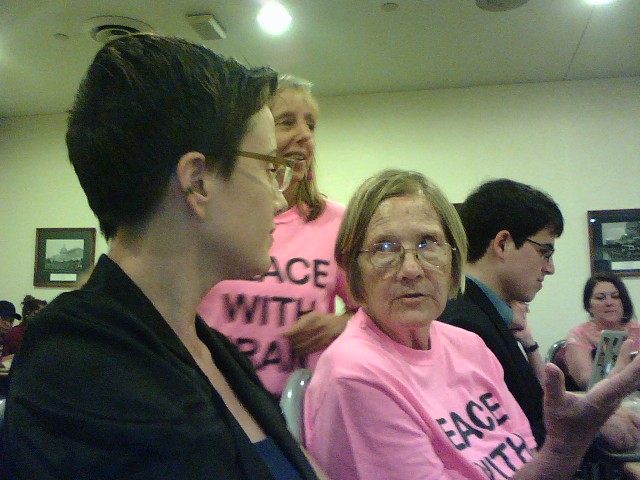 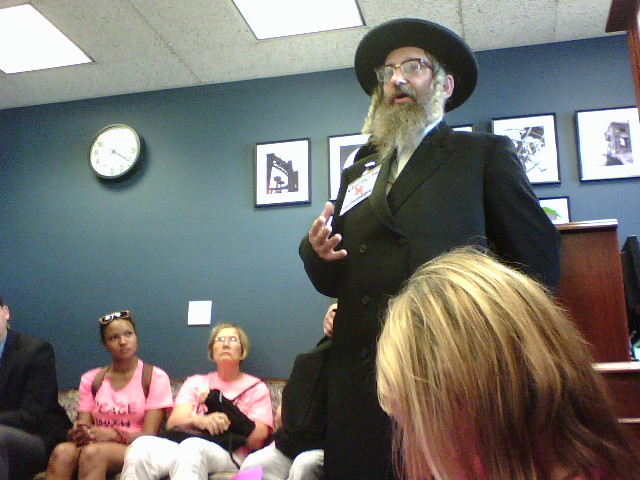 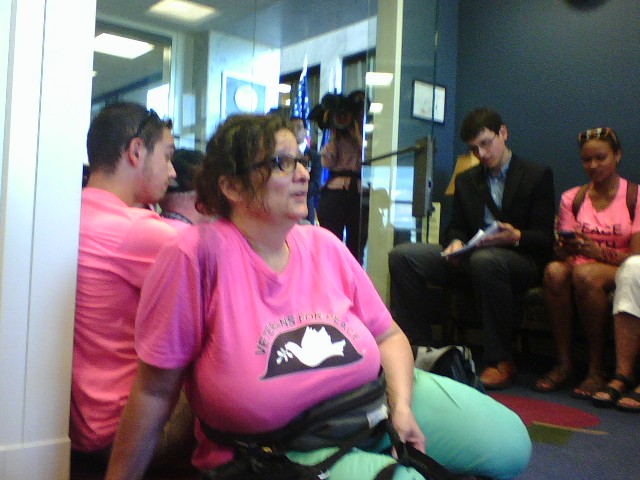 The staff person Lane Bodian eventually came out and we all spoke . We were just singing “Gonna walk with my Jewish Friends, down by the riverside” as he came into the room! 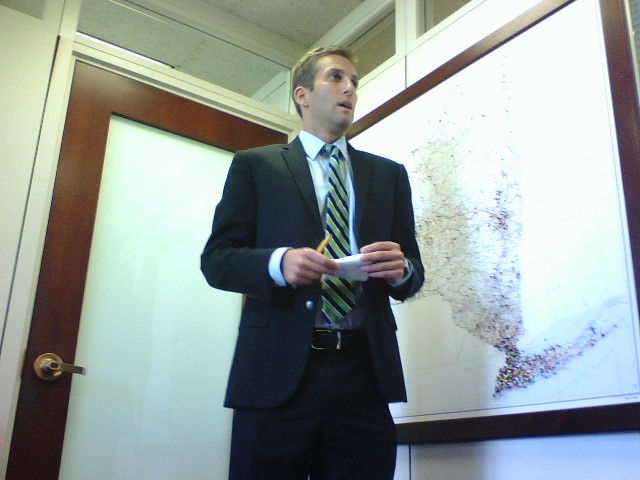 So much went on it is hard to recount.  We went to the House Foreign Affairs Hearing, Admiral William Fallon retired USN Former Commander, U S Central Command spoke in favor of diplomacy wonderfully. I will eventually write to him if  I can find him and Rep. Reo Connolly spoke about the deal being a “Road to Peace”  they spoke bravely amidst hawks, including Mr Royce the chairman.

Meanwhile at the American Enterprise Institute, former Vice President, Dick Cheney was speaking against the peace deal with Iran.  That was where the famous confrontation of Cheney by Code Pink staff member, Michaela Anang took place.  It included a tug of war with an audience member who tried to grab her banner as she was being escorted from the room.

Michaela sent the link to an interview about this incident to Wendy.  It also includes a video of the attempt to rip the banner from her hands.  She was victorious in holding onto the banner while also calmly exiting the room. But the interview demonstrates the wisdom and strength of purpose of this 21 year old intern. 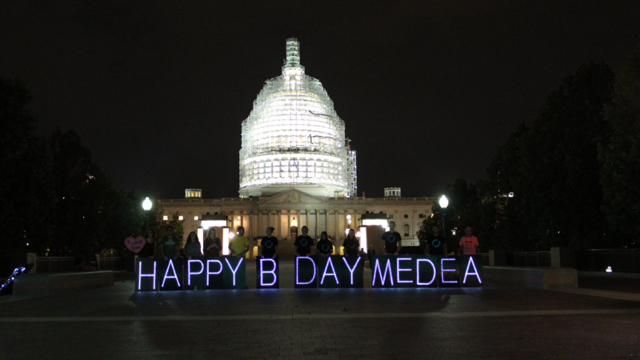 Thursday, September 10th, was Medea’s birthday. Last night, despite hard work all day [up at 6 am, moving props, staffing the microphone, organizing, cooking, delivering,  on and on], Tighe set up this display in front of the U S Capital for Medea’s Birthday which was today, September 10, 2015 , the day the Iran Agreement was won!  Isn’t this amazing!

Tighe and Medea are amazing as well!