May 12, 2012 Merchants of Death March and Vigil at Tulip Festival, focusing on US corporations that profit from war.

Oct 15, 2011 Death, Destruction and Debt. Grannies vigil on Henry Johnson Bridge with coffin and large $1.25 trillion Debt Box to protest the cost of the Afghan War at end of its 10th year, before joining in multi-group anniversary commemoration. 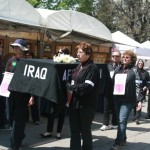 May 7, 2011 Bring Our Troops & War Dollars Home. Bearing a coffin and dressed in black, Grannies march through the Tulip Festival, grieving with the mothers and grandmothers of Afghanistan, Iraq, Pakistan, Libya, and Gaza who have lost children to warfare.

March 17, 2011 Grannies delegation to Senator Schumer’s office to demand cuts in the military budget, withdrawal of US forces from Afghanistan and opposition to drone warfare.

Feb 14, 2011 Grannies march through Colonie Center shopping mall singing peace songs and vigil outside calling for an end to funding for Afghan War.

April 2009:  Community & Campus Speaking Visit of Joan Wile and Barbara Walker from Grandmothers Against the War in NYC.

July 31, 2007 Vigil in front of VA Hospital calling for adequate health and mental health care for vets, followed by a series of advocacy meetings with VA staff.

May 2007: Stand in the Park for Peace vigilat the Tulip Festival on Mother’s Day weekend.

April 2007: Grannies Protest War’s Contribution to Global Warming at Step It Up.

Feb 2007 Reverse the Surge: Grannies Recruit for Peace. Grannies try to talk to military recruiters at Colonie Center about the need for peace-making recruits and vigil outside.

Jan 18, 2007: 100 Grannies Visit 100 Senators: Linking with sister grannies across the country to lobby Senators, visit offices of Senators Schumer and Clinton to demand a repeal of the Patriot Act and the Military Commissions Act, the closing of Guantanamo, and funds for true reconstruction in Iraq – with a well attended media conference afterwards.

May 6, 2006: No Attack on Iranian Mothers and Children. Grannies hand out fliers at Tulip Festival on Mother’s Day weekend.

Feb 14, 2006 Take Us Instead! Valentine’s Day Demonstration. The first Grannies for Peace action – at the Colonie Center military recruiting office. See Metroland story on the event.