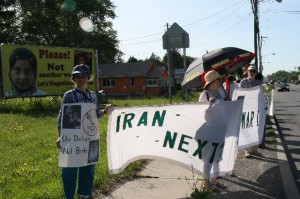 This WAW project is exemplified by the slogan: “Iran next? No war, no way!” Our goal is to avoid military action against Iran by the U.S. or any other country and to see diplomacy and negotiation used as alternatives. We don’t dismiss the provocative statements by Iran’s leaders about international relations, or accept the human rights abuses of the Iranian government, but we know that war is not the answer. War is disproportionately harmful to civilians, especially women and children, and does not lead to lasting peace. Our president and Congress need to go more than halfway to find avenues to peace with Iran; this will save many lives and avoid the crippling cost of another unnecessary war.

A core group of volunteers plan and carry out programs each year that you will read about on these Iran project pages. We are supported and complemented by a larger group of WAW members who support our plans and are likely to attend the films, speakers, demonstrations, and meetings with U.S. elected representatives that we organize every year. We work closely with other peace organizations to co-sponsor and promote these Iran events. The public is always invited to attend and ask questions or offer insights. 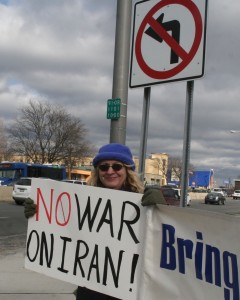 Iran elected a new president, Hassan Rouhani, in June 2013.  Dr. Rouhani campaigned on the promise to “pursue a policy of reconciliation and peace.”  His election opens new doors for diplomacy by the U.S. and other countries. Join our campaign to demand U.S. diplomacy with Iran toward a more peaceful Middle East. Here’s what you can do:

We met with Congressman Paul Tonko on February 21, 2013, and Congressman Chris Gibson on March 28, 2013, as well as staff in the offices of Senators Schumer and Gillibrand in June and July 2013, to promote peace and diplomacy with Iran and to offer background information on Iran, the effects of sanctions on women and their families, and the costs of another war.  See our Talking Points under Project Resources/Links below.

The Iran project has engaged author and journalist Stephen Kinzer to speak in our area in April 2014 about U.S. policy toward Iran and the Middle East.

Ongoing and Past Community Events 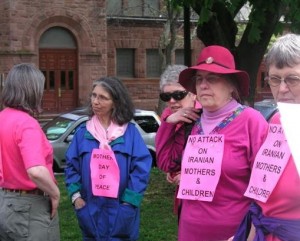 Advocating to Prevent War Against Iran

A dozen Women Against War members celebrated Mother’s Day 2006 by handing out fliers at the annual Tulip Festival celebration in Albany’s Washington Park. Decked out in pink and wearing signs saying “No Attack on Iranian Mothers and Children” and “Mothers’ Day of Peace,” these women sparked the beginning of our Iran project.

Keep U.S. Out of Iran Billboards

Two commercial billboards in prominent locations in the Albany area in 2007 and 2008 encouraged citizens to take action to prevent war with Iran. We demonstrated at our billboard sites, which drew press coverage.

Three acclaimed feature-length Iranian films were shown at Siena College in October and November 2011, with moderators and discussion leaders who know Iran. Co-sponsored by WAW and Siena College’s Peace Building Through the Arts program. 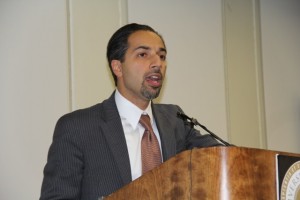 Outside Speakers About Iran: Trita Parsi, founder of the National Iranian American Council, and author and expert on U.S.–Iran relations, spoke at both the New York State Writers Institute and Siena College in November 2012. We also scheduled him for an interview with SienaTV and a meeting with the Times Union editorial board.  WAW co-sponsors included Fellowship of Reconciliation, three academic programs at Siena College, and two groups at the University at Albany. 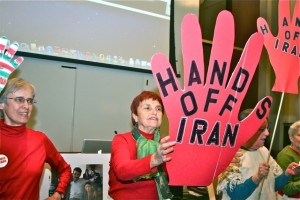 Demonstrations: the Iran Project organizes demonstrations every year in high-visibility       locations including at the annual Food Festival at the Empire State Plaza, at Wolf Road and Central Avenue, and at farmers markets. We also take part in general anti-war events where we display our banners and photos of Iranians.

Rick Steves’s Travel Video on Iran: We arranged to show this video, with its stunning photography from Iran and interviews with ordinary Iranian citizens, at libraries in the area, which publicized the screenings to their patrons and the public. Our Iran travelers often served as discussion leaders after the films. Rick Steves is known for his excellent travel videos of Europe, but he took a side trip to Iran because he thought we should know people before we decide to bomb them.

Lobbying elected representatives: The Iran Project is always active in lobbying Congress and the president to support patient diplomatic negotiations with Iran rather than sanctions or military action. Consistent lobbying of Congress, the White House, and State Department is needed to encourage a positive atmosphere for nuclear negotiations and other diplomatic and regional agreements with Iran.

Waging Peace Blog:  Women Against War bloggers and guest writers post many Iran-related essays on the Waging Peace blog (see the right-hand sidebar on the blog page under “Categories” and “Archived Articles” to find Iran subjects). 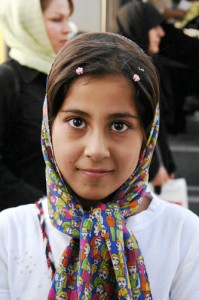 Photo by Diane Reiner from her Iranian travels

At least five local women who are active with Women Against War have traveled to Iran and  are available to speak about their experiences:

To request an appearance by any of these speakers, contact info@womenagainstwar.org.

See Resources/Links on the right for more links.

Diplomacy with Iran sets the example for a change in US foreign policy, Iran Project Vigil at Albany Food Fest, August 10, 2016 from 12:30 to 1:45 PM
Spotlight Reports on WAW Iran demonstration
At our September 10th coalition rally to urge approval of the Iran Deal, Wendy Dwyer brought news of Code Pink actions in Washington, DC
Women Against War and our part in the August 26, 2015 Rally to change Chuck Schumer’s mind about the Iran agreement. Followed by a nonviolent sit in by the “Fantastic Five.”
Report on our 2015 “I Love NY Food Festival” Vigil. This year’s theme: Change Chuck’s Mind!
Iran Project joined students and faculty at Union for an informational picket, May 5, 2015
Local demonstration to end the wars, Saturday March 21st from 1 PM to 2 PM, photos by Mabel Leon. With a Facebook link to other excellent photos by Jeanne Finley and Jon Flanders
Roshni Online Reports on Nazila Fathi’s Speech in Albany
A message from WAW Iran Project member and photographer Diane Reiner
Report on Stephen Kinzer’s April 7th and 8th visit, by Alice Brody & Link to blog article by Marcia Hopple & books available!