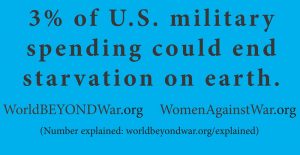 WAW billboard on Central and Western Avenues in Schenectady and Watervliet, May, 2018. One of two billboards displayed in the Capital District during the month of May.

This article was written by Priscilla Fairbank, the organized and energetic coordinator of the billboard launch.  Photos by Priscilla and Mabel Leon.

Early in 2018, an email notice from World Beyond War.org caught our attention.  On their website, World Beyond War describes itself as  “a global nonviolent movement to end war and establish a just and sustainable peace.”  They had launched an anti-war billboard campaign and were encouraging organizations to raise the money to have billboards put up in their own communities.  There were over 20 designs, each on their familiar sky blue background.  WAW’s steering committee discussed and endorsed the idea.  Several years ago, we had raised money for a couple of “No War on Iran” billboards that featured lovely photos of Iranian children.  We felt those had made our message available to many who would not have heard it otherwise.

Although our original focus had been an April display to coincide with the IRS tax filing deadline when taxpayers are thinking more about where their tax dollars go, our calendar was busy with other WAW events so we settled on May.

WAW is eligible for a Public Service Announcement rate which allows us to pay for one billboard and get a second one at no extra charge.  After looking at the many designs, we settled on “3% of U.S.military funding could end starvation on earth”.  It seemed simple, direct, bold – something against which no one could disagree.  It also seemed clear enough that drivers could read and comprehend while driving by.
Maud’s fundraising outreach was met with immediate success.

We contacted Lamar Advertising, owner of most of the area billboards, and asked for a list of available locations during May.  At first the lists were somewhat confusing but, with a little study, provided us with a great deal of information: location including distance from cross street, number of weekly impressions, dimensions, direction faced, illuminated or not, current advertiser.  We narrowed the list based on this information.  Then several of us spent a couple of hours driving to view the sites.  Our final choices were one on Route 5 near the Schenectady border, and the second on Route 2 just west of Watervliet.

We set our launch date for May 3rd at the Route 5 site.  Maureen reached out to local press, providing a background press release and followup reminders.  WOOC radio at  the Sanctuary for Independent Media included a 15 minute interview with Priscilla about how the billboard project came about.

On Thursday, May 3rd, about 20 members of WAW, and supporters, gathered to hold signs on both sides of the highway, bringing attention to the billboard that commuters would see for the next month.  Photos were carried in The Daily Gazette and Times Union, letters to the editor about the billboard message appeared in the TU, written by Catherine Cavanaugh and Pete Looker, and Maud wrote a blog about the billboards on WAW’s Waging Peace. 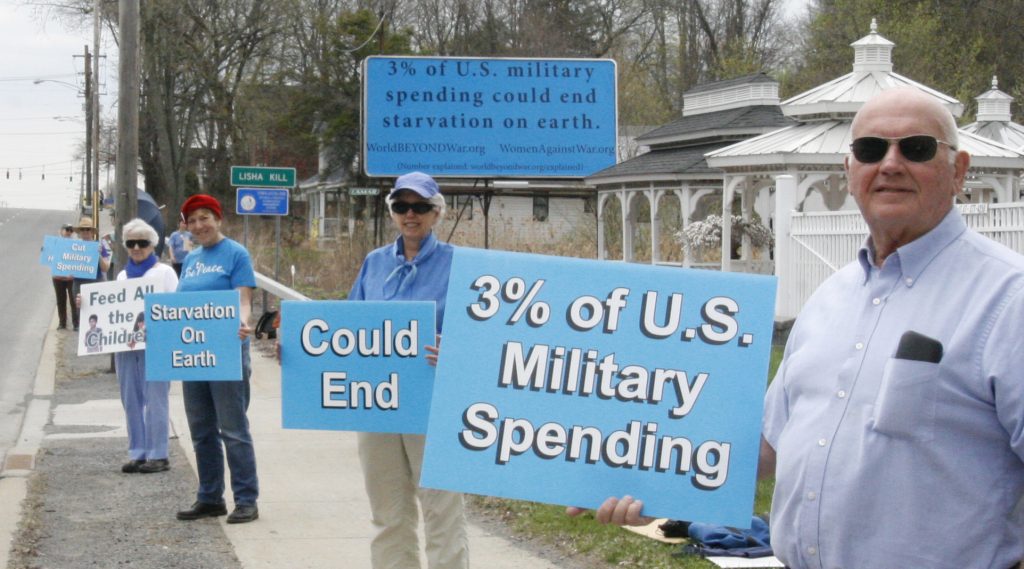 Signs and billboard on South side of Central Avenue, May 3, 2018, photo by Mabel Leon

Every day many people drive by the two billboards.  Based on Lamar’s numbers, our two sites have 155,000 views per week.  We believe our effort raises the awareness and hopefully a conversation about U.S. military spending, its immense size, and the many other things that are not being funded because of it.  We hope this motivates people to contact their elected officials and urge them to vote for different choices.  We are planning to fund another set of two billboards in September, before the midterm elections. 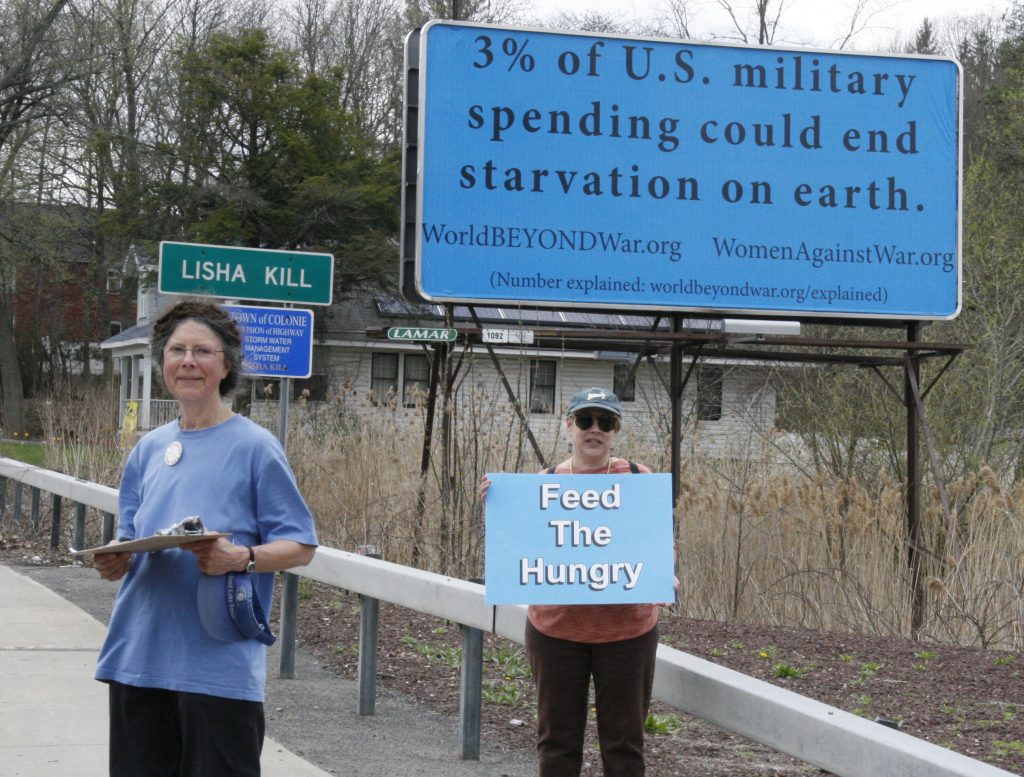 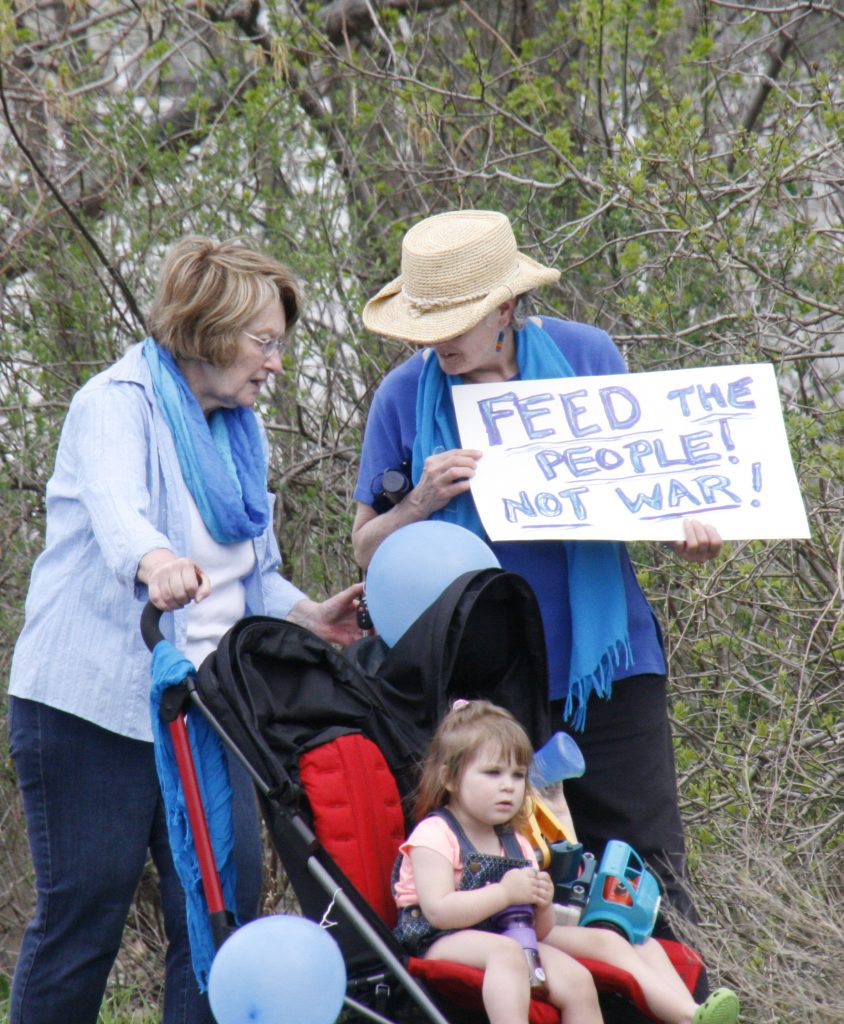 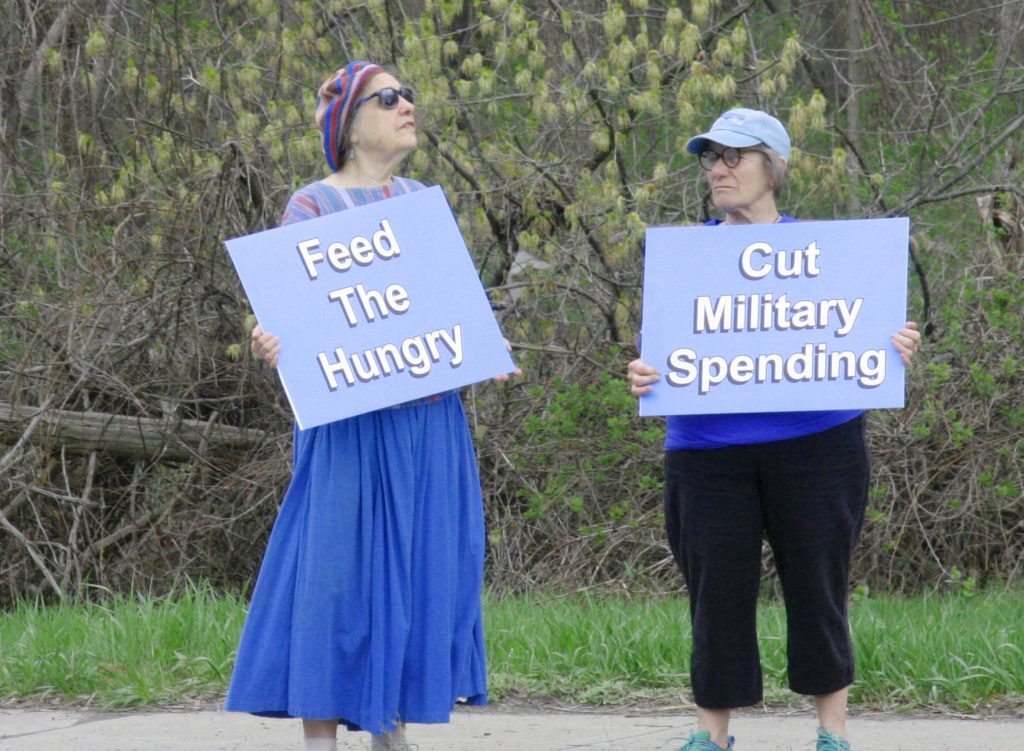 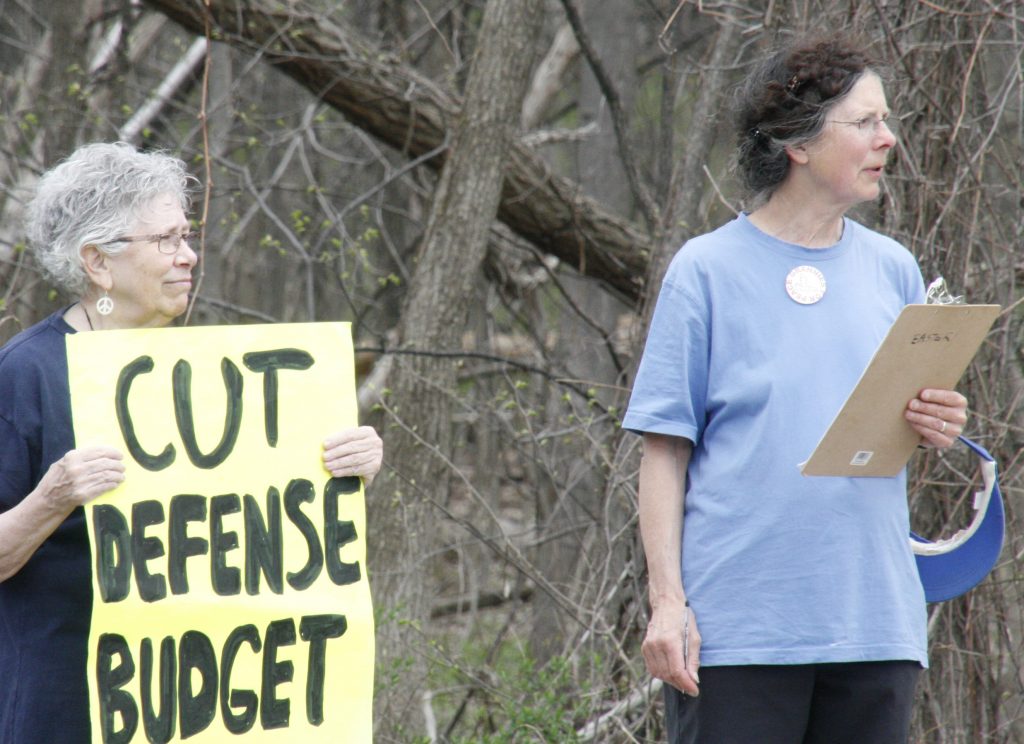 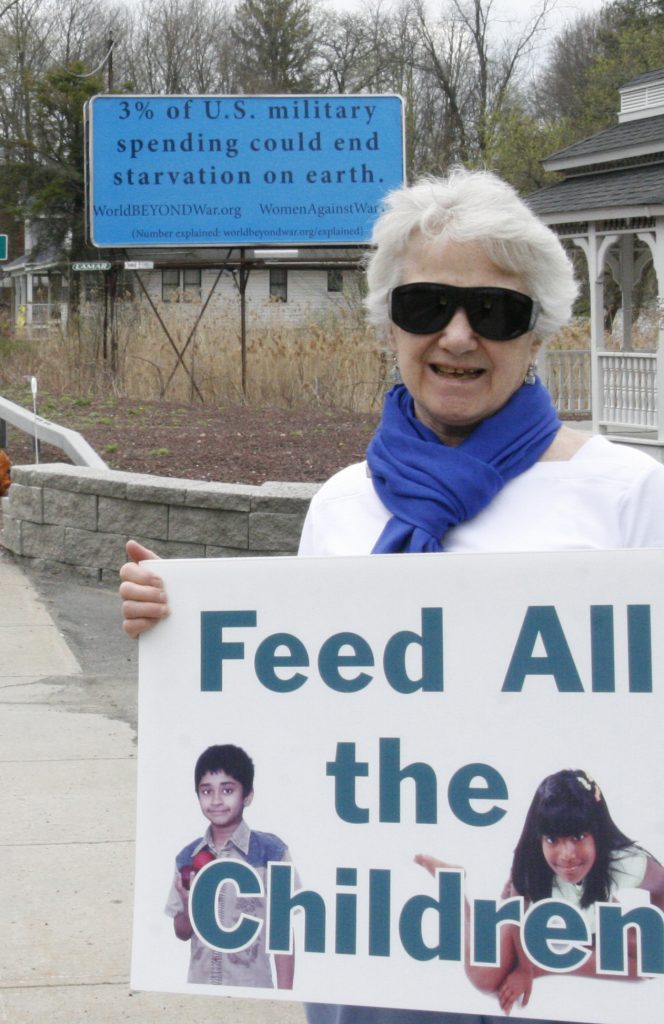 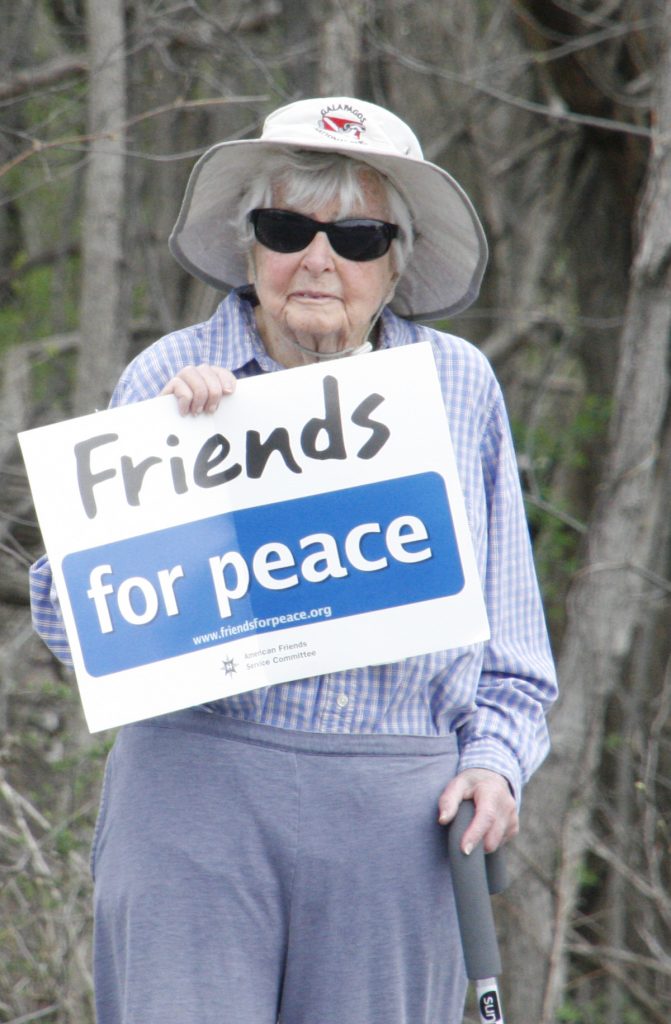 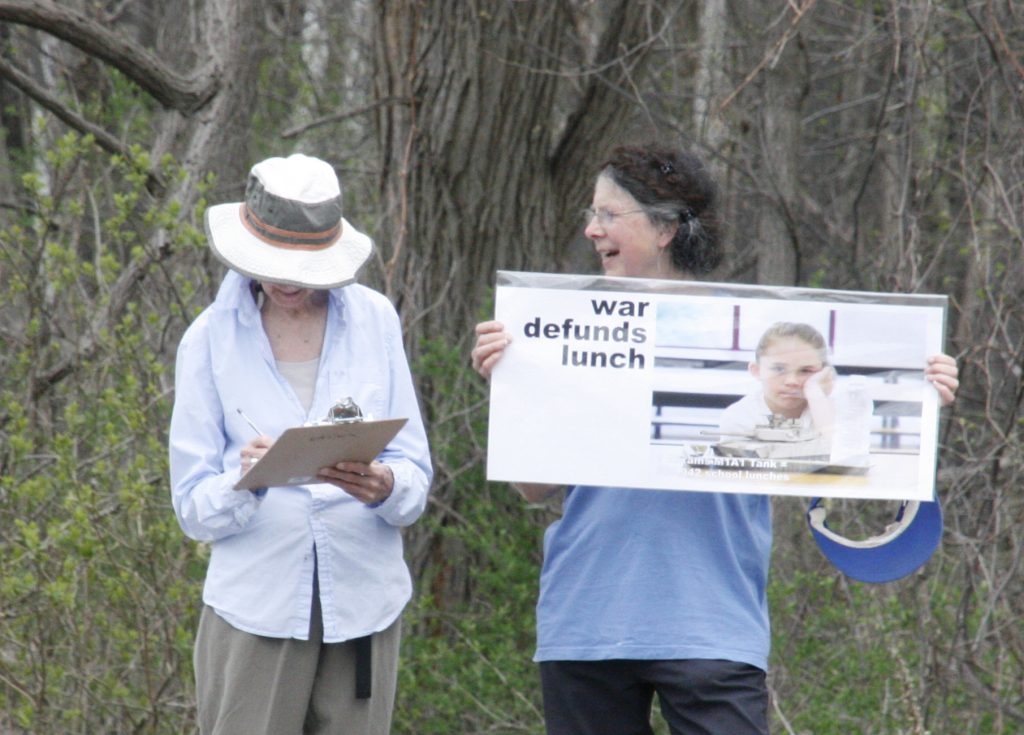 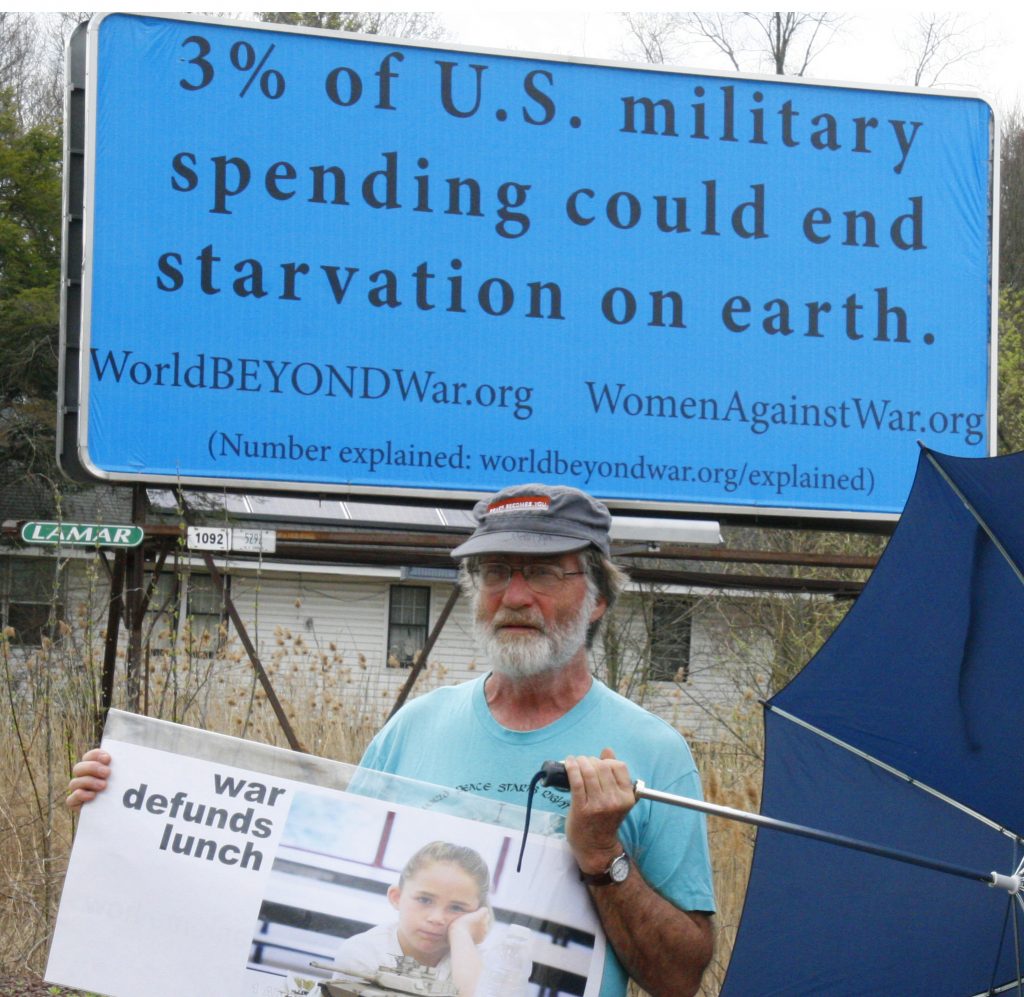 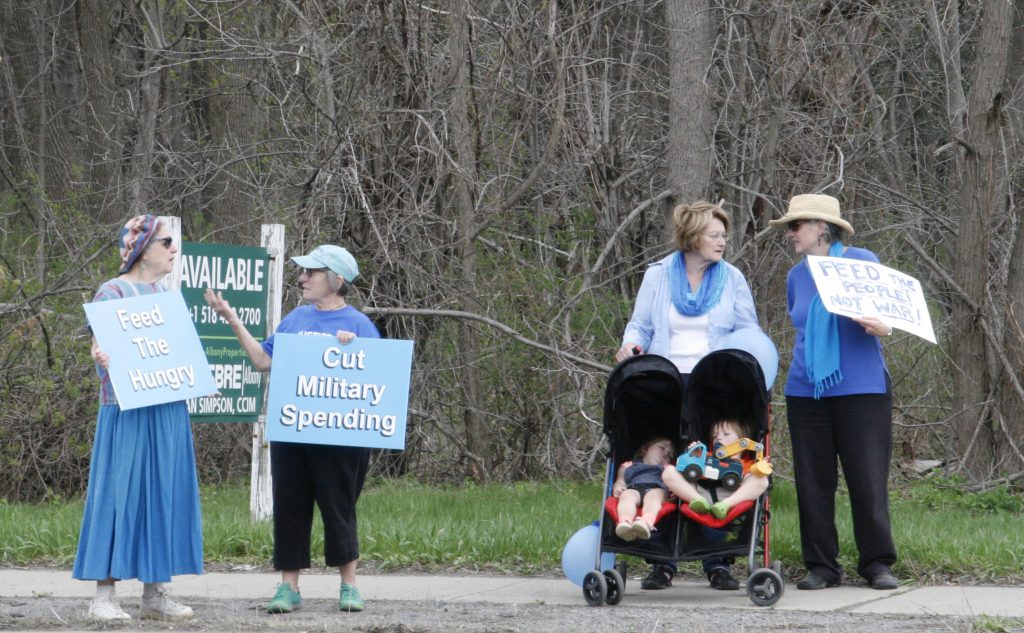 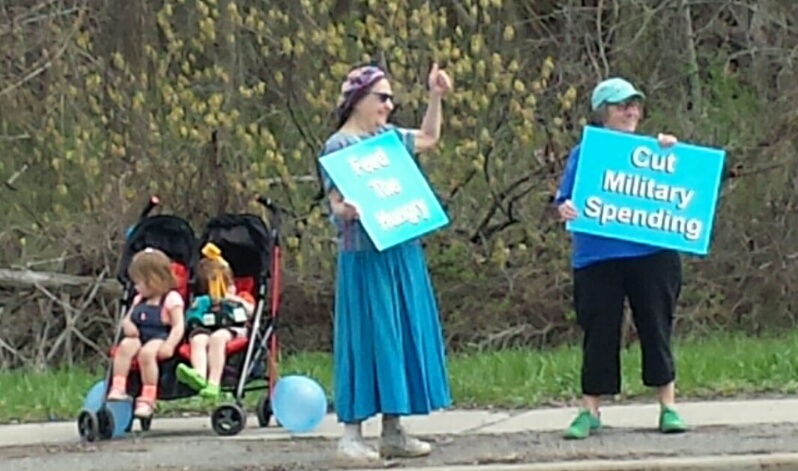 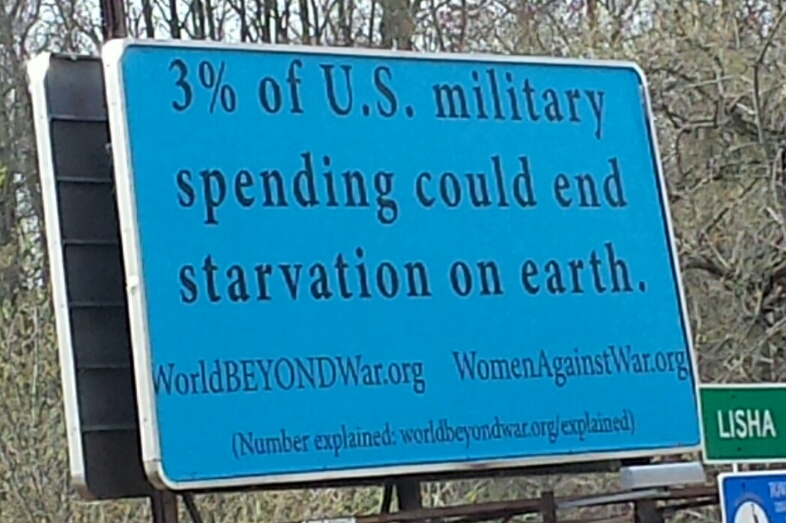 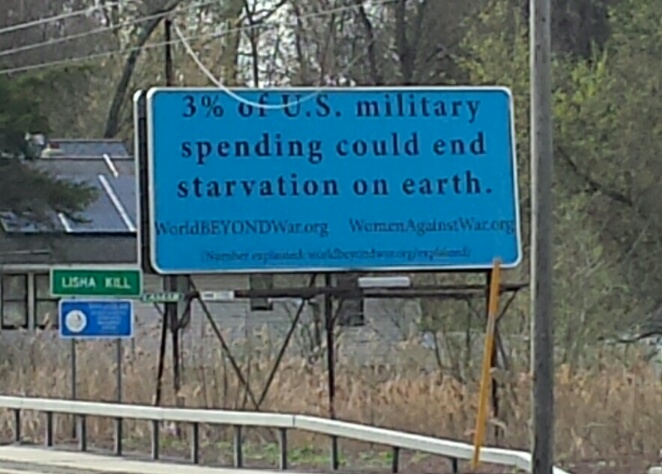 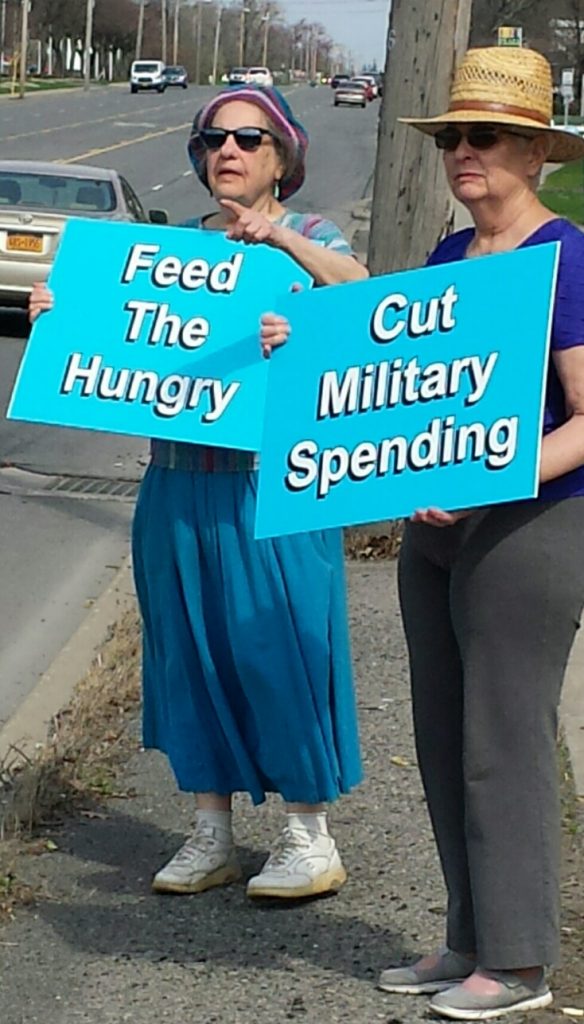 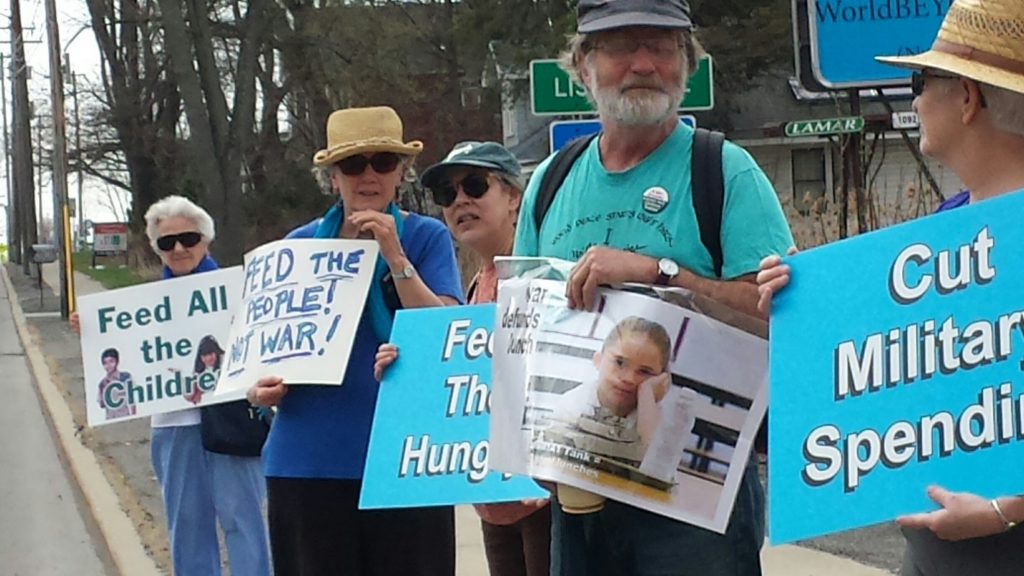 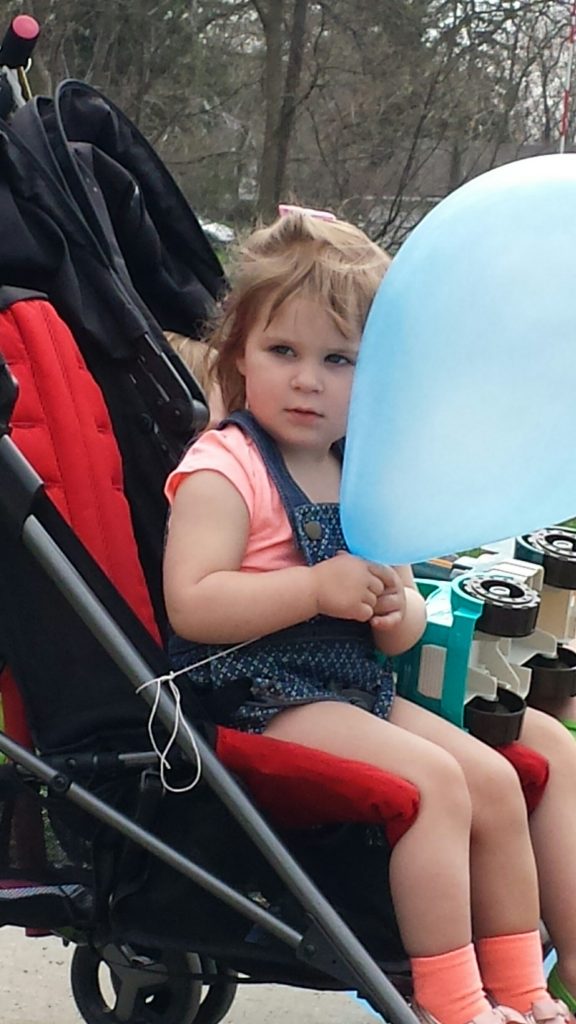 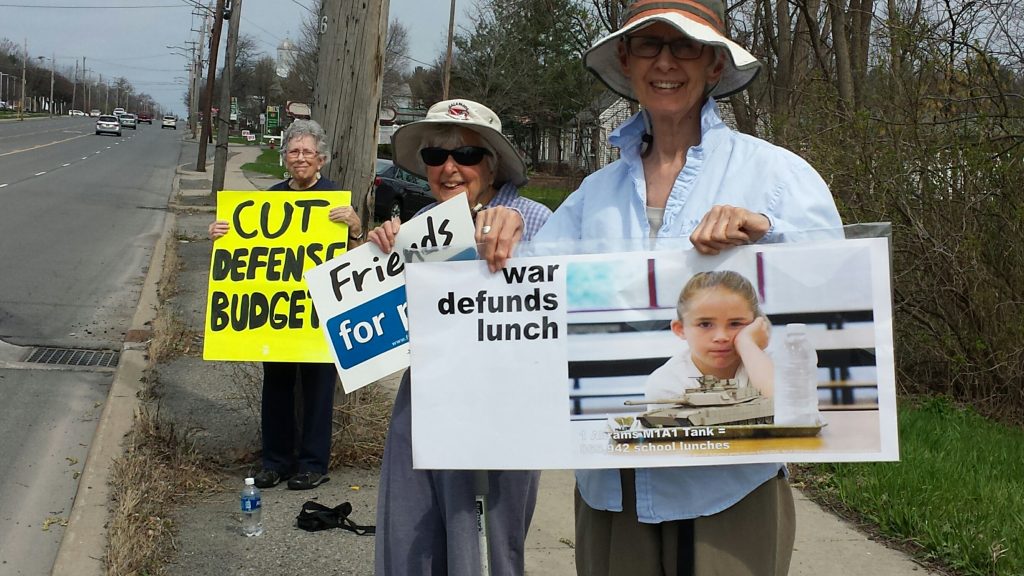 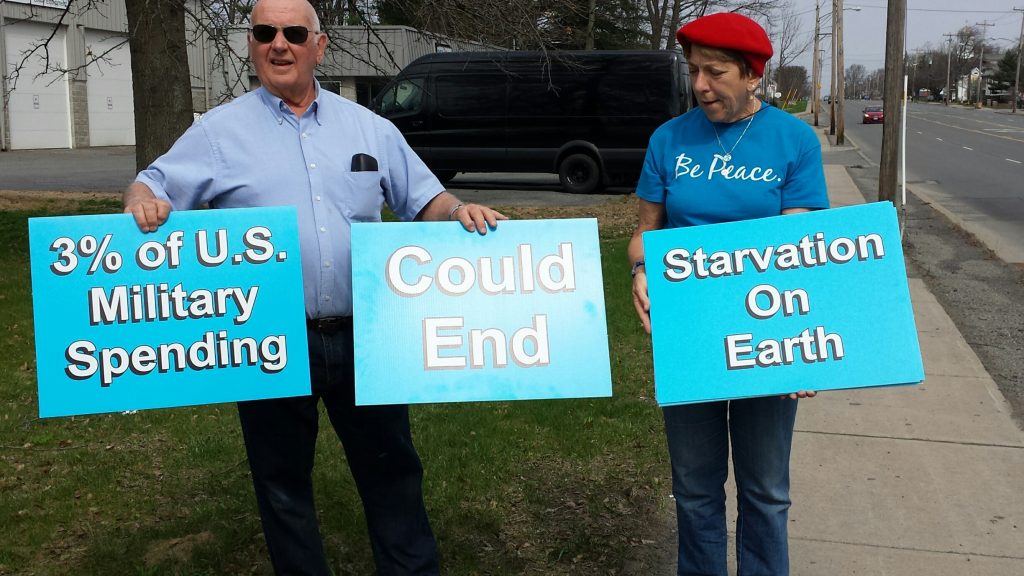