The purpose and the spirit of our vigil to End Endless War was best summarized in our media release and in the presence and determination of about 30 peace and justice activists from the Capital District.  Here’s the media release:

Grannies for Peace will lead a vigil to End Endless War on Monday, September 21, 2015,

The International Day of Peace

WHO: Grannies for Peace, Beyond Afghanistan/No Drones Project, Women Against War,  Many other local peace and justice groups.

WHERE:  Corner of Central Avenue and Wolf Road, Colonie NY

WHAT: Our large banner will say: “WANT PEACE? NO DRONE KILLINGS. NO ARMS SALES.” 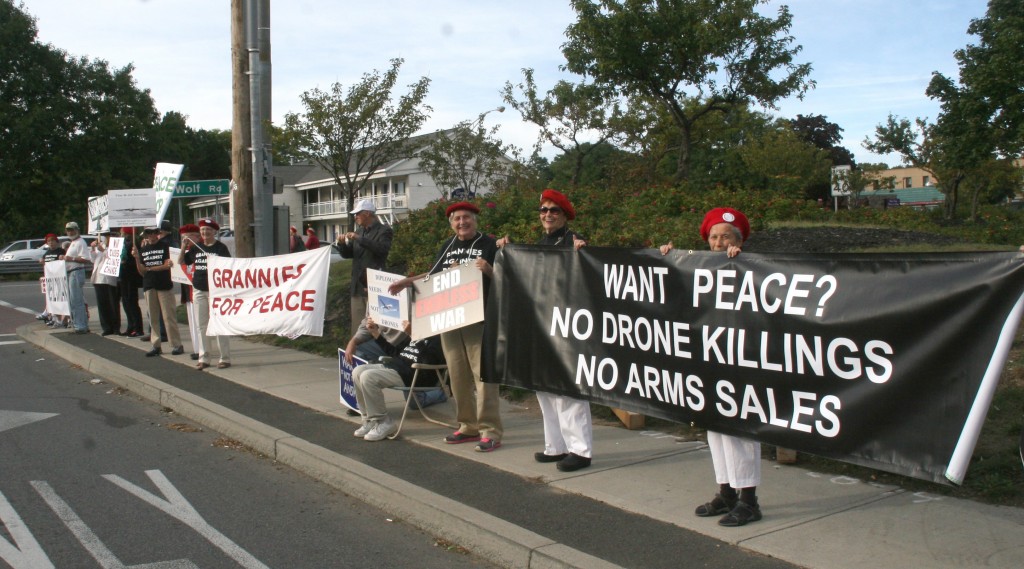 Banner with our Yard Sign message, with Bertha, Mabel and Fran. Photo by Mark Klein.

We will have signs saying  End Endless War and many other signs and banners on the themes of drone killings, racism, militarism, greed, war and climate change, and the need for diplomacy.  People are also invited to bring their own signs. We will vigil rain or shine and share our messages with the drive time commuters during this international day of peace.

WHY:  In the words of one of our three Grannies for Peace co-coordinators, Dot Richards

The world is stunned by the surge of migrants into Europe – families on the run, the silent scourge of war!  Humans by the hundreds of thousands desperately walking, running, swimming and pleading for asylum.  Most of the deaths and misery of war are perpetrated against civilians.  We must wake up to the fact that war is not the answer.  War is immoral, foolish and futile. It must be the last resort always. When will we ever learn? 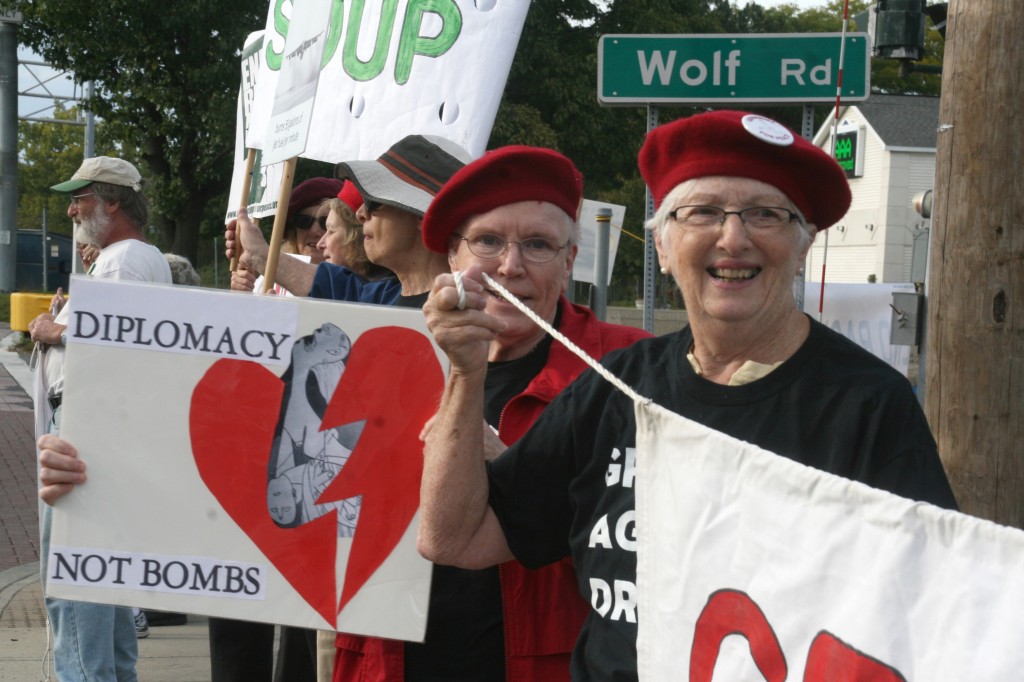 Dot with Grannies for Peace banner, photo by Mabel Leon

Sister Doreen Glynn shared a quote from Pope Francis, who will be visiting the United States at the time of our vigil:

We have tried so many times and over so many years to resolve our conflicts by our own powers and by the force of our arms. How many moments of hostility and darkness have we experienced; how much blood has been shed; how many lives have been shattered; how many hopes have been buried. … But our efforts have been in vain. Now, Lord, come to our aid! Grant us peace, teach us peace; guide our steps in the way of peace. Open our eyes and our hearts, and give us the courage to say: ‘Never again war!’; ‘With war everything is lost.’ 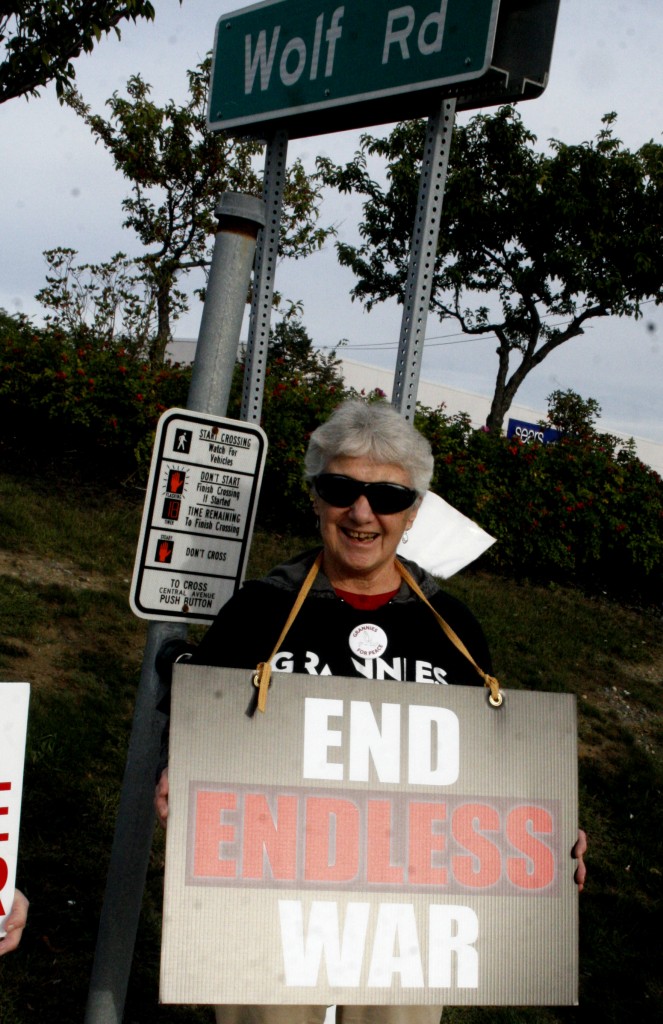 Doreen with one of the End Endless War signs that she created, photo by Mabel Leon

And Granny, Joan Thornhill, on vacation and enjoying time with her grandchildren and the natural beauty of the Pacific Coast, said:

Even though we have this time for serenity and we can afford to even think about Peace, our hearts are heavy with the thoughts of how senseless and meaningless WAR is!  War is filled with fear and destruction–Peace is filled with courage and compassion.  I have a t-shirt that says, ‘Peace also takes courage’  Pope Francis’ has certainly stepped up to the plate .  We hope he gets even more courageous–maybe he could join us on the 21st on his way to Philly! 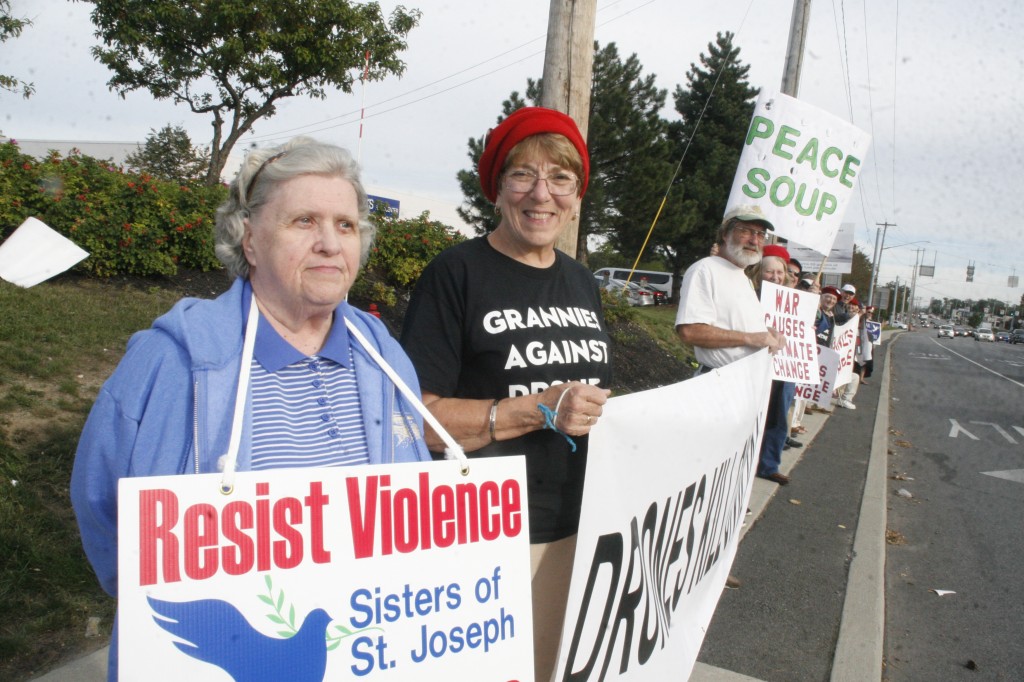 Dreams of a future without war:  In the words of Patti Smith’s song, People Have the Power: 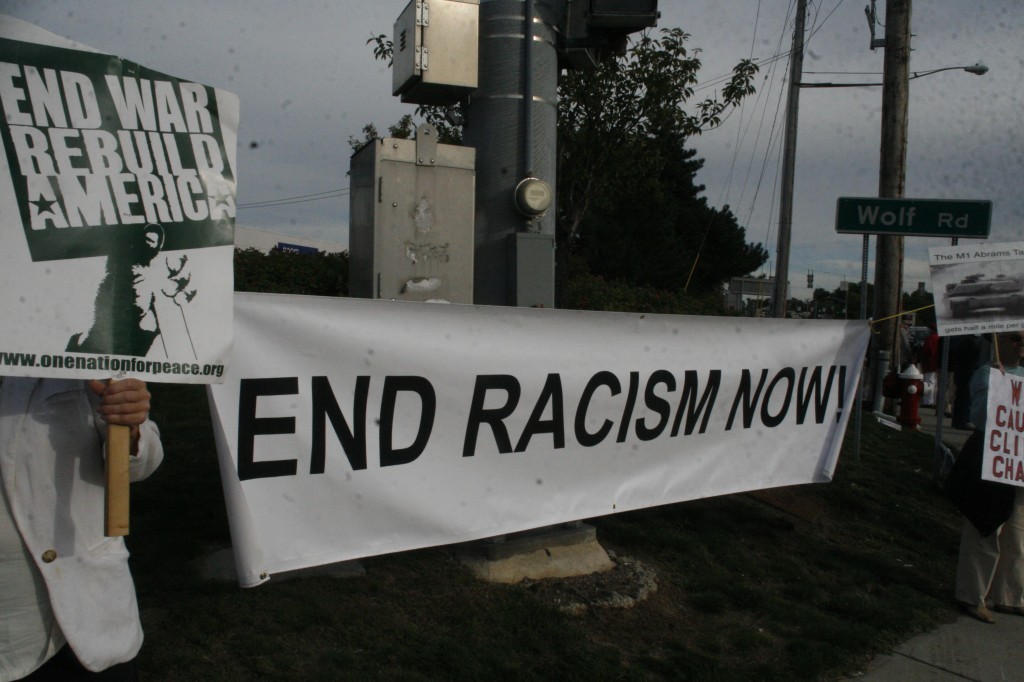 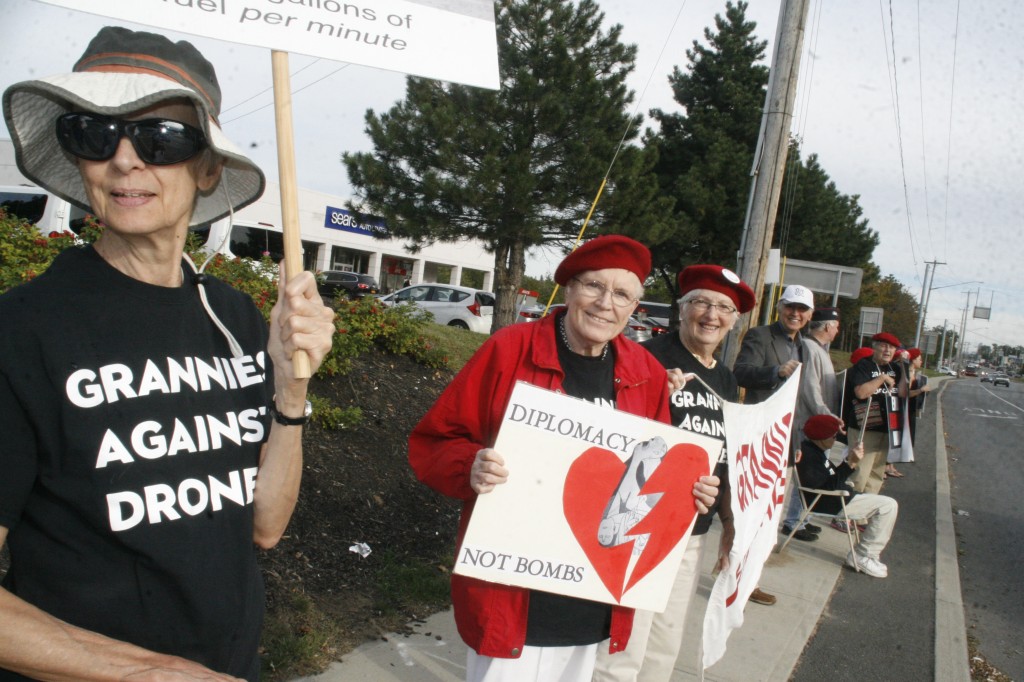 Marcia with one of our War Causes Climate Change signs. Photo by Mabel Leon 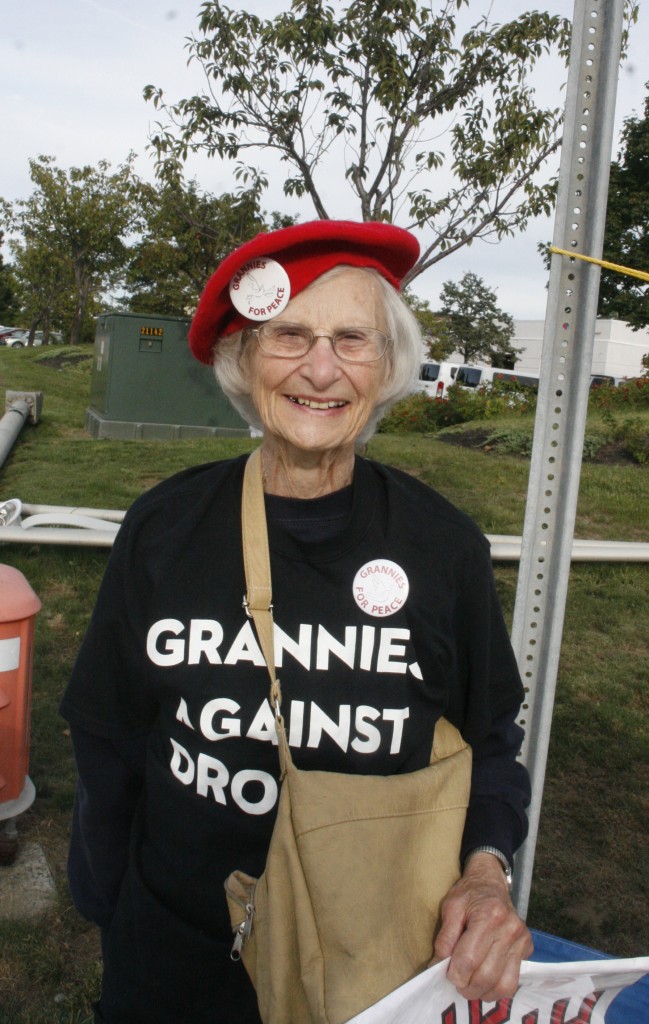 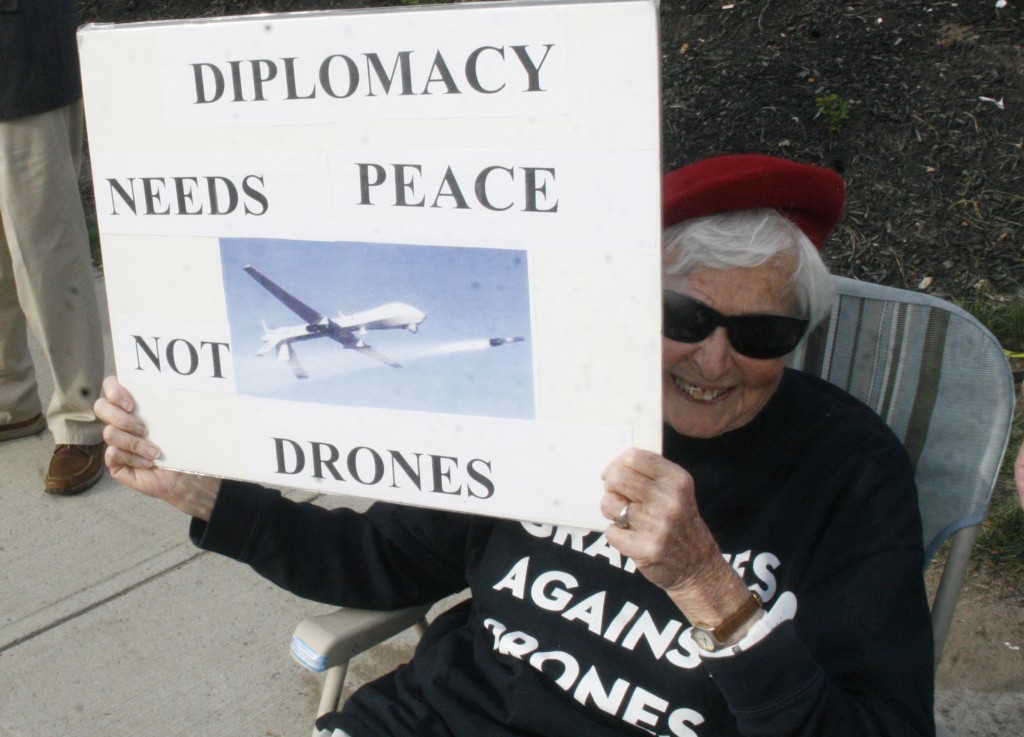 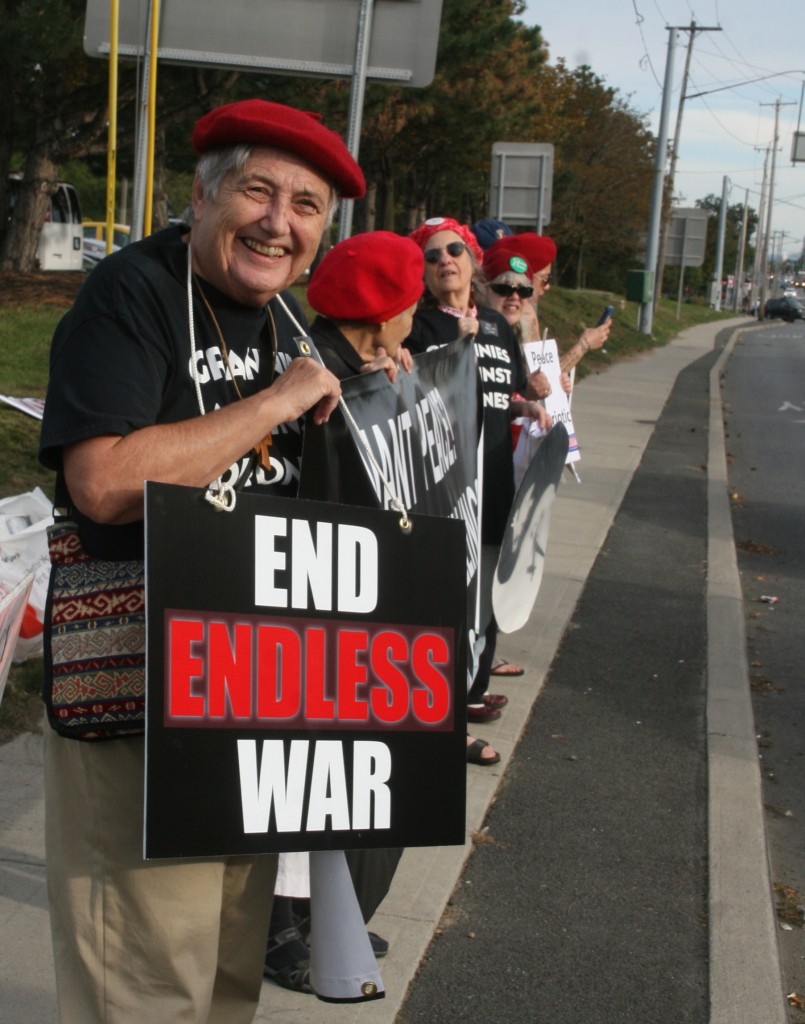 Central Avenue end of the vigil. Fran in the foreground. Photo by Mabel Leon 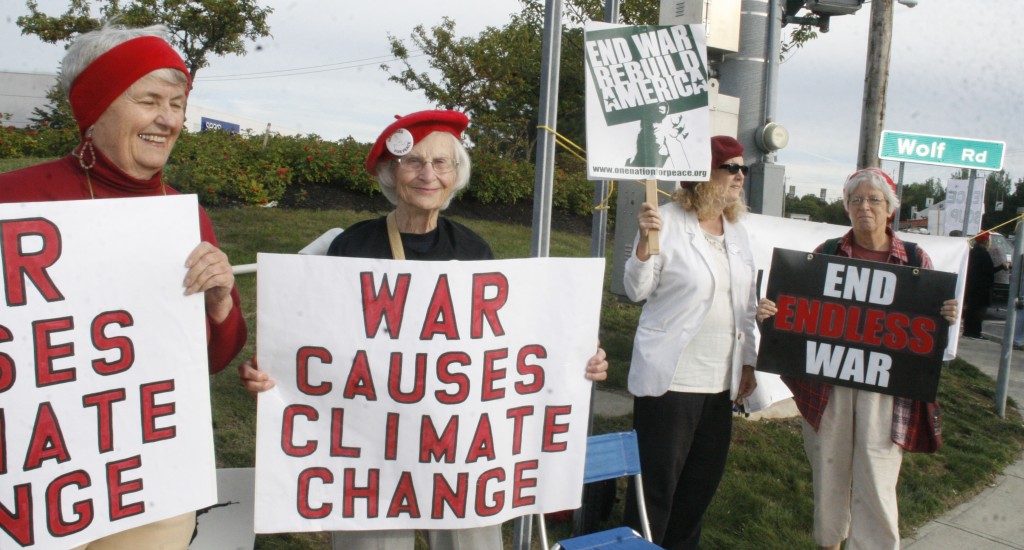 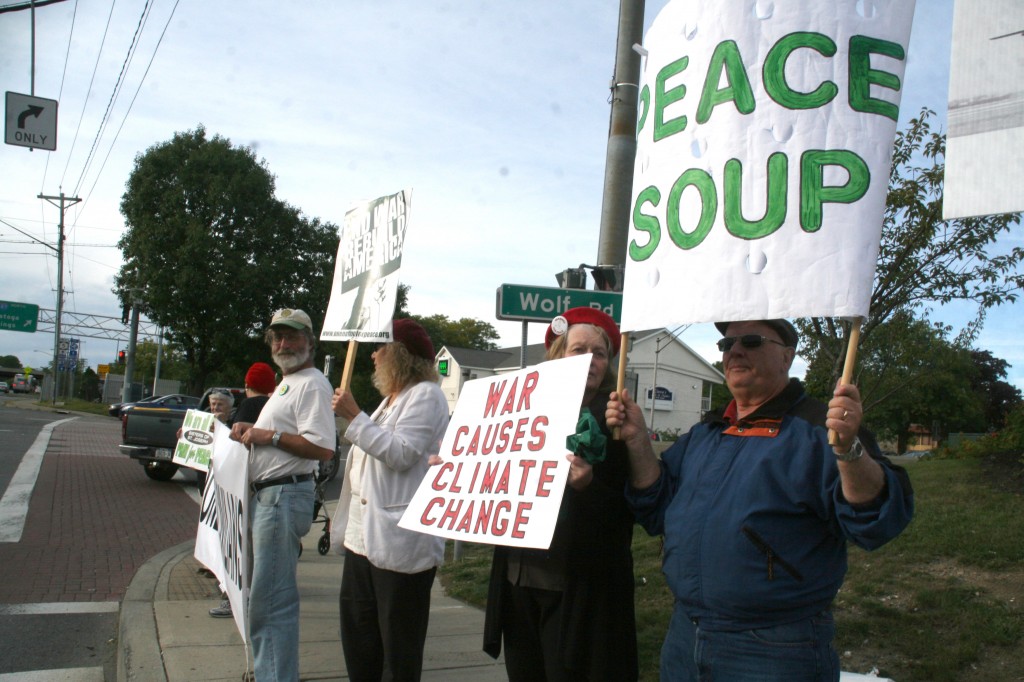 This is part of the story.  For more photos and a view of the context in which this vigil was taking place you can see our blog article on Waging Peace , which also describes the young Afghan Peace Volunteers #Enough! campaign.

Displaying our signs linking the Pentagon, war and military actions and climate destruction, Grannies for Peace and other members of Women Against War joined environmental allies for an hour stand near Capitol Park West. 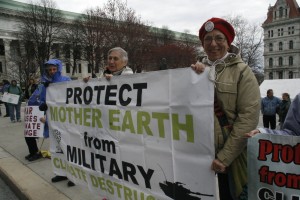 This was the brief description of the all day Earth Day celebration held on Wednesday, April 22nd in Albany:

Wednesday, April 22, 11 am. – 8 pm. Earth Day 2015, West Capitol Park, Albany.  Energize Democracy Climate Justice Rally, Speakers- Music -Action. Organized by Frack Free Nation which would like you to sign up  that you’ll be there:

Here was the invitation to our event: which lasted formally for just one hour but some of us attended more of the Earth Day celebration (see more photos at Frack Free Nation)

Wednesday, April 22,  Noon – 1:00 pm, West Capitol Park, Albany. Join Women Against War & Grannies for Peace at the Earth Day 2015 Rally. We’ll be demonstrating with signs and banners protesting the US military: the world’s single biggest consumer of fossil fuels   Maureen Aumand will be among the speakers.

Remarks by Maureen Aumand at Earth Day Events on April 22 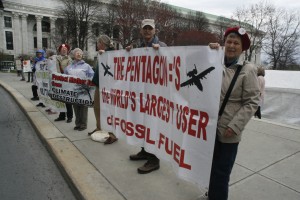 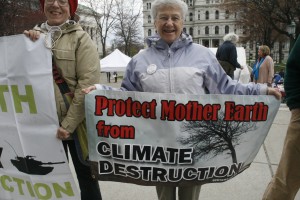 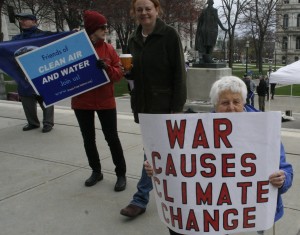 Pat Beetle seated with one of Kim’s theme signs, photo by Mabel Leon

For many more of Mabel’s photos see our blog article on the Times Union website:

Today (4/28/15) I received a report from Joy First of NCNR about their Earth Day Pentagon action. It’s quite moving and I’ll link to it here.Letter on April 27 about NCNR actions
She also provided a link to some pictures of the arrests at the Pentagon.