Why is the US involved in the deadly Saudi bombing of Yemeni civilians? 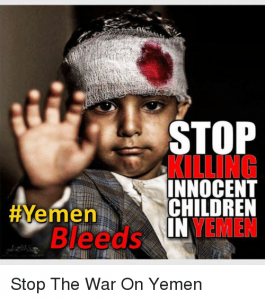 US military support of the Saudi attacks and blockades is another in a long list of deadly wars we should not be fighting. Unauthorized, and unconstitutional, this is one war we may be able to convince Congress to stop supporting.  There have been over a million cases of Cholera and diphtheria is raging.

Yemen, an Arab republic in Western Asia that borders on Saudi Arabia, was already one of the world’s poorest countries before the Saudi attacks began three years ago. Although the U.S. provides humanitarian aid to Yemen we’re spending far more to destroy its infrastructure. Causing famine and disease.  According to Save the Children, nearly 400,000 Yemeni children will need to be treated for life threatening acute malnutrition in the next year. Aid organizations are being blocked from this work by the Saudi closure of air, land and sea routes, and by frequent, massive bombing strikes. Right now 130 children die every day in Yemen from extreme hunger and disease–one child every 18 minutes. 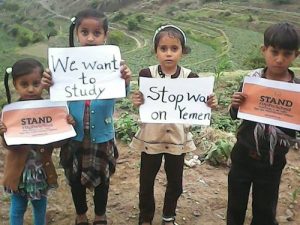 Ask your Senators to give this humanitarian crisis their full attention and find ways to end our involvement and move Saudi Arabia toward diplomatic resolution of the murderous war in Yemen.

See senate contact information on reverse side.  Thank you!  www.WomenAgainstWar.org

END US ROLE IN DESTRUCTION OF YEMEN

In March 2018, the US Senate Foreign Relations Committee held a hearing about our military involvement in the Saudi led coalition that is bombing civilians, hospitals and clinics, schools, infrastructure, and hopes for the future in the impoverished country of Yemen. By late 2017 more than 13,500 lives had been lost.

Now Congress may finally be looking critically at U.S military involvement in the humanitarian crisis in Yemen.  We provide refueling, weapons, and intelligence support to the ruthless war that Saudi Arabia is waging on the people of Yemen.

NOW IS THE TIME for us to tell our US Senators and Congress members:  END US PARTICIPATION IN THE SAUDI ARABIA-LED COALITION that has reduced Yemen to a wasteland of famine, disease, rubble, and despair.

ACT NOW while the revelations of the horror and hopelessness we cause are hanging in the air in the US Senate.