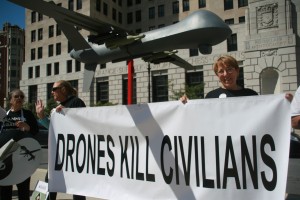 This article was delayed by preparations and implementation of our drone quilts exhibit that took place from October 20 through November 19, 2014 but here’s a brief summary of our meeting with David Connors who is Senator Kirsten Gillibrand’s regional director in the Capital Region.

We originally attempted to meet with Senator Gillibrand herself during the summer recess and early fall break but were unable to do so.  Instead we were able to meet with her regional director, a member of the millennial generation, a husband and father and a long term staff member of hers.  We ended up having a bit more than an hour long meeting with him on Monday, October 6, 2014.

There were six of us doing the presentations about the effects of our weaponized drone policies on civilians and about the need to repeal the AUMF which makes war and drone attacks possible without the advice and consent of Congress.  We also called for a moratorium on military intervention ins Syria and Iraq and the use of drones, bombs, missiles and arming some factions of the current wars.

Here’s a summary of our presentations:

Connie Houde: Why drones do not work;  they are not efficient and they create more violence and anti-USA sentiment. Using Pakistan as an example: the drastic increase in US drone attacks in Pakistan did not decrease the number of “terrorist attacks” in the region. The killings of Taliban Commanders only increased violent attacks and spread such attacks from the Northern tribal area to engulf all of Pakistan with a focus on the country’s economic and political center, Karachi. (Related topic: Why we need to leave Afghanistan to decrease the suffering of women and children).

Mabel Leon:  Drones Kill Civilians; While the US government seldom acknowledges civilian deaths referred to as collateral damage, civilian deaths are real and have been documented. The numbers are hard to comprehend as real people and a sense of numbness takes over. The numbers of civilian deaths clearly dispel the myth that drone strikes are precise or accurate.  (Related topic about domestic policy: Appreciation for Senator Gillibrand’s support of measures against sexual assault in the military)

Hazel Landa: Covert drone attacks are a violation of US and international law; They violate our constitution and democratic principles.  At the moment they are secret with no transparency or accountability and no process for judicial review.

Mickie Lynn:  Congress needs to pause and debate the bombing of Syria and Iraq; Call for a ceasefire, open debate, a Senate bill requiring authorization and a definite time period. We need to pursue other options that don’t lead to the killing and displacement of Syrian and Iraqi civilians, and that don’t create environmental devastation.

Maud Easter: What Congress can do. What we want Senator Gillibrand to do; Focusing on sunsetting the AUMF and shifting drones out of CIA control. And including requirements for transparency and regular, accurate reporting on civilian deaths.

Here’s a link to our complete set of requests and informational resources sent to Senator Gillibrand’s office and handed in during the meeting.Drone meeting with David Connors in Gillibrand office Oct 6 2014 talking points (2)

Here is a followup email to Senator Gillibrand’s legislative aide about policy towards Iraq and Syria with a few more references:

When David met with the six delegates from the Beyond Afghanistan/No Drones Project of Women Against War on Monday, October 6th he was a very attentive listener and promised to forward our written materials to you in Senator Gillibrand’s Washington, D.C. office.

We also engaged in spirited dialogue during the hour long meeting. Now I hope that I can send materials directly to you and receive a response.

At that time  in early October, Congress was about to recess until the mid-term elections were over.  No debate or discussion had taken place about the bombings of Iraq and Syria by US forces that had already been going on for several weeks. At a daily cost of $7.5 million per day for Iraq and $16 million dollars per day for Syria.  I don’t know what the current figures are but they are probably even higher.

Now Congress is about to reconvene on Monday, November 17th.   While we applauded Senator Gillibrand’s refusal to vote for funds to arm Syrian rebels we find Congress facing another decision point.  Earlier this week President Obama said that he was going to ask for authorization to continue the bombing over Syria and Iran and to arm and train what he described as moderate forces, as well as the Iraqi army.  He was also planning to double the number of US advisory and training forces in Iraq.

It seems as if we need to oppose what very much looks like an escalation that is creating more human suffering (especially in Syria) and blocking resources and efforts for humanitarian aid and a negotiated de-escalation of the carnage and new refugee crisis that is currently occurring.

Here are some of the ideas for alternatives and strict limits to new authorizations and continued bombings:

I urge you to support the principles of H. Con. Res 114, which calls for Congress to oppose the use of ground troops and says any AUMF on Iraq and Syria should be narrow and limited.

In particular, any AUMF should:

1. H.Con.Res.114 – Urging Congress to debate and vote on a statutory authorization for any sustained United States combat role in Iraq or Syria, https://beta.congress.gov/bill/113th-congress/house-concurrent-resolution/114/amendments

There are many other requests for alternatives to continued bombing; including the UN Peace Envoy to Syria’s idea of freeze zones where humanitarian aid could actually be delivered and distributed while neither side takes advantage of the pause in fighting and bombing.

This a very important pivotal point where we might possibly avoid the human and financial costs of a three year military war in favor of negotiated settlements and humanitarian aid that could win friends instead of creating more enemies in the Middle East.

I spent several hours summarizing some of the things that we requested during our meeting with David in October. Yesterday I published them in a blog article in our local paper, the Times Union.  Here is the link to that article:

What we asked Senator Gillibrand to do about ISIS in early October.

Women Against War hopes that you will read the article, and share the ideas with Senator Gillibrand when she is considering actions concerning a new AUMF.

Many things have changed since our October meeting.  I’ll be following up with a second article early next week and will send you the link to that one as well.

In the meanwhile I hope that you will both read and comment on our blog article and the requests that we are making and share your thoughts with Senator Gillibrand.

With appreciation for your interest and help with these communications, 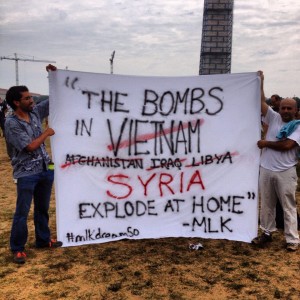