Here’s a description of the vigil that was written by co-planner Maureen Aumand, who worked with Maud Easter on the Grannies for Peace’s 10th annual Valentine’s Day vigil ably assisted by many other Grannies and joined by allies from the community: 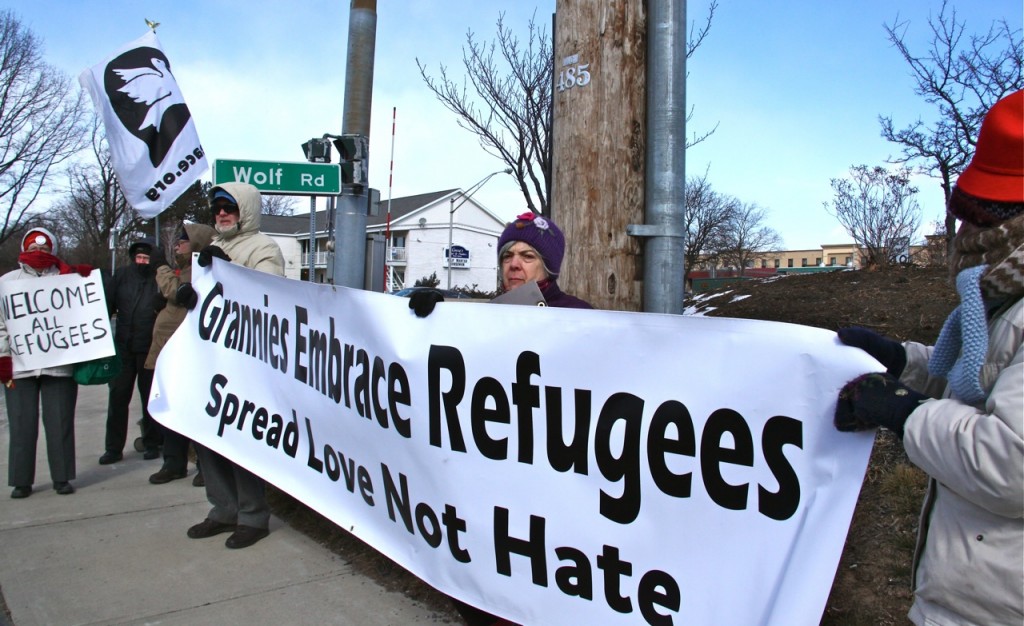 Banner with the theme of our vigil, photo by Jeanne Finley

Basking in the warmth of camaraderie, the bundled up group, sporting lots of red and good humor, were acknowledged enthusiastically by many driving by. The messages being saluted included: GRANNIES EMBRACE REFUGEES; SPREAD LOVE NOT HATE; WELCOME REFUGEES; SAY NO TO ISLAMOPHOBIA; DEFEND THE MUSLIM COMMUNITY. 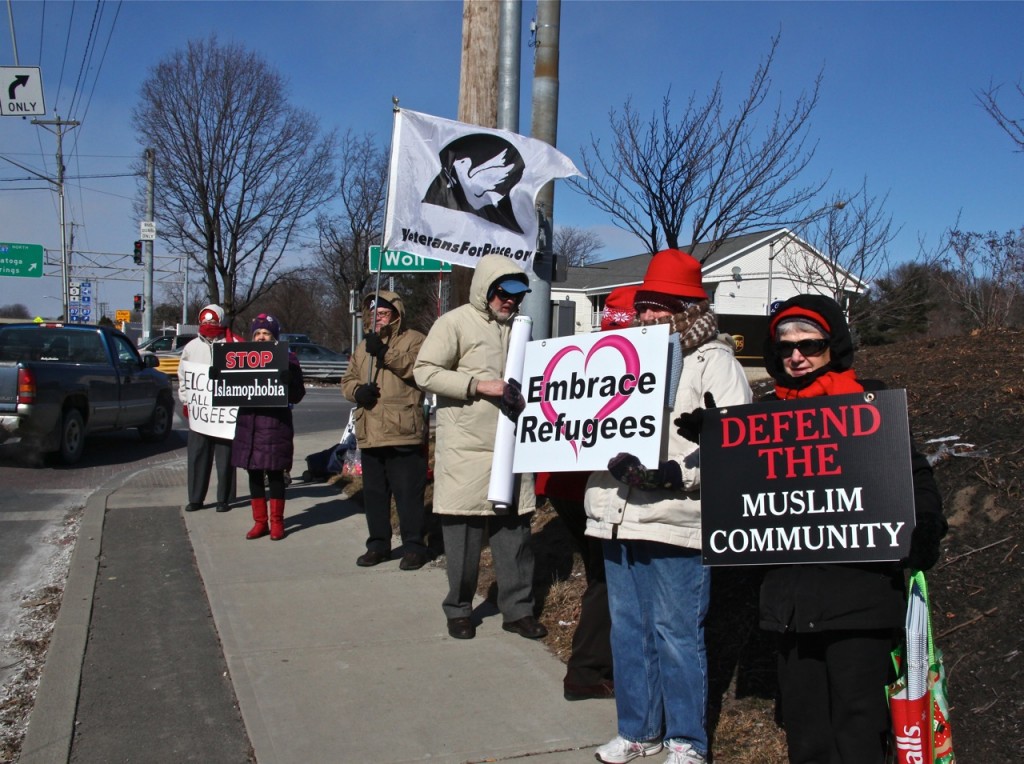 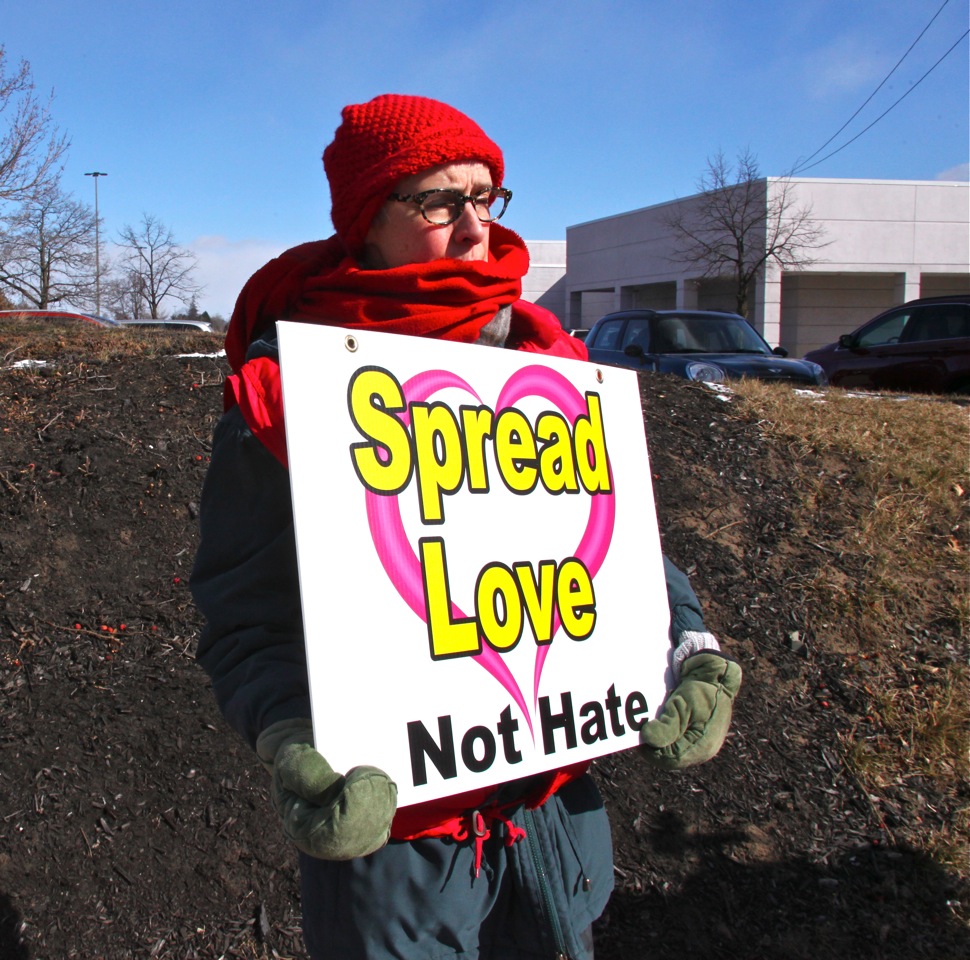 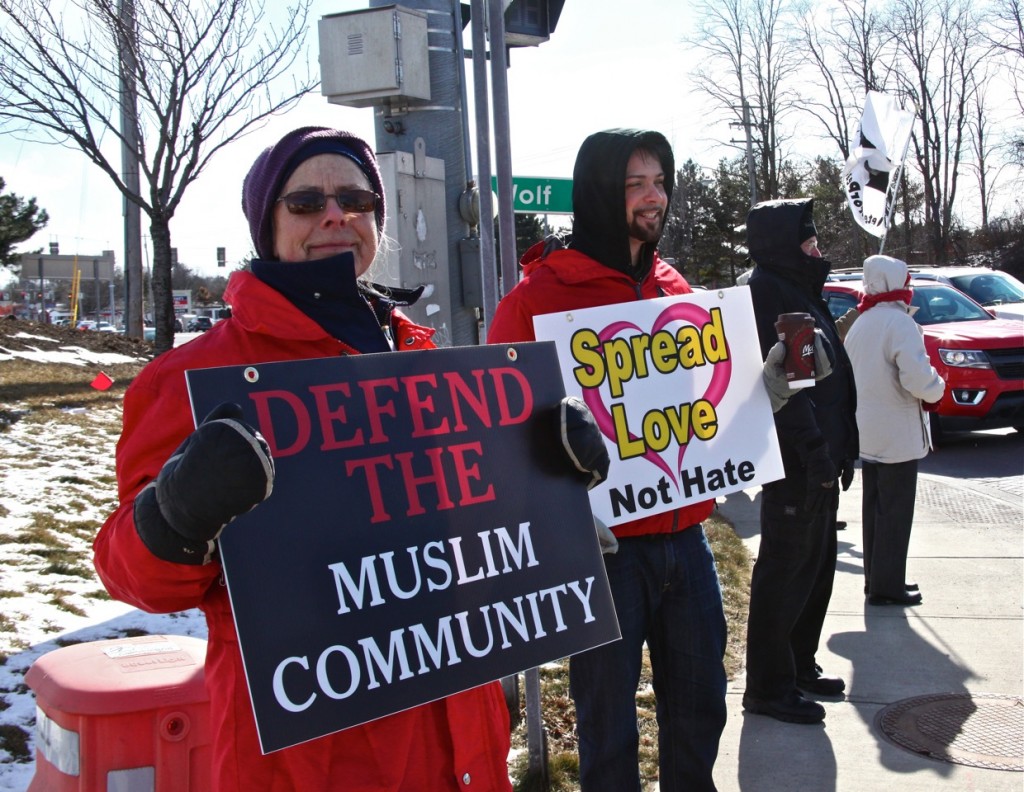 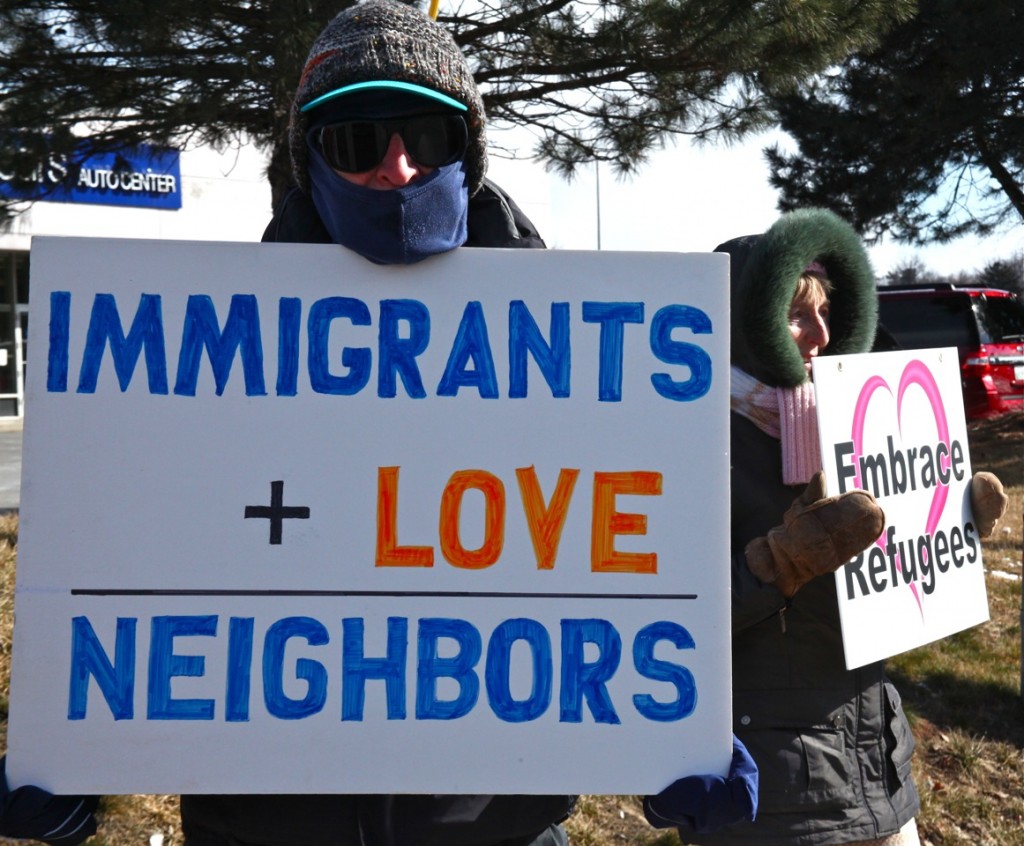 Reflecting on the chill of the day, Saratoga Peace Council member, Linda LeTendre (who had brought artfully designed bumper stickers to share which read: “I Love My Muslim Neighbors”) reminded us that “sometimes love is uncomfortable.” 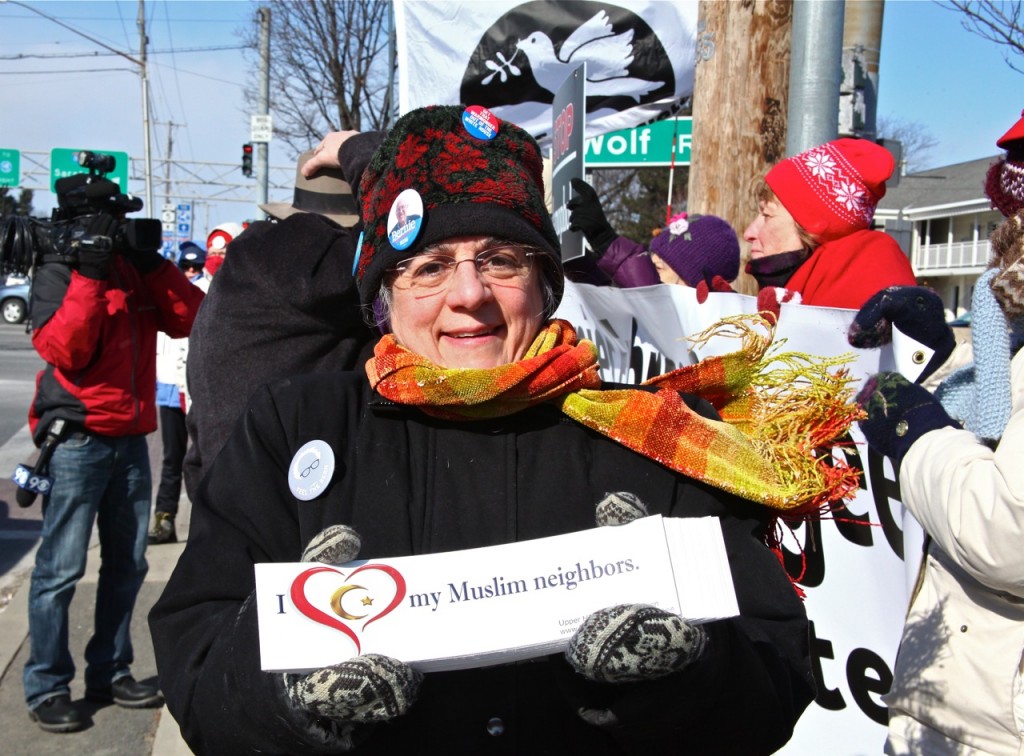 Though Dan Wilcox, a Grannies supporter and member of Veterans for Peace whose flag flew dauntingly above the vigil determined that  “With hand-warmers, warm hearts & the warm response from those driving by we kept the cold of hate at bay.” 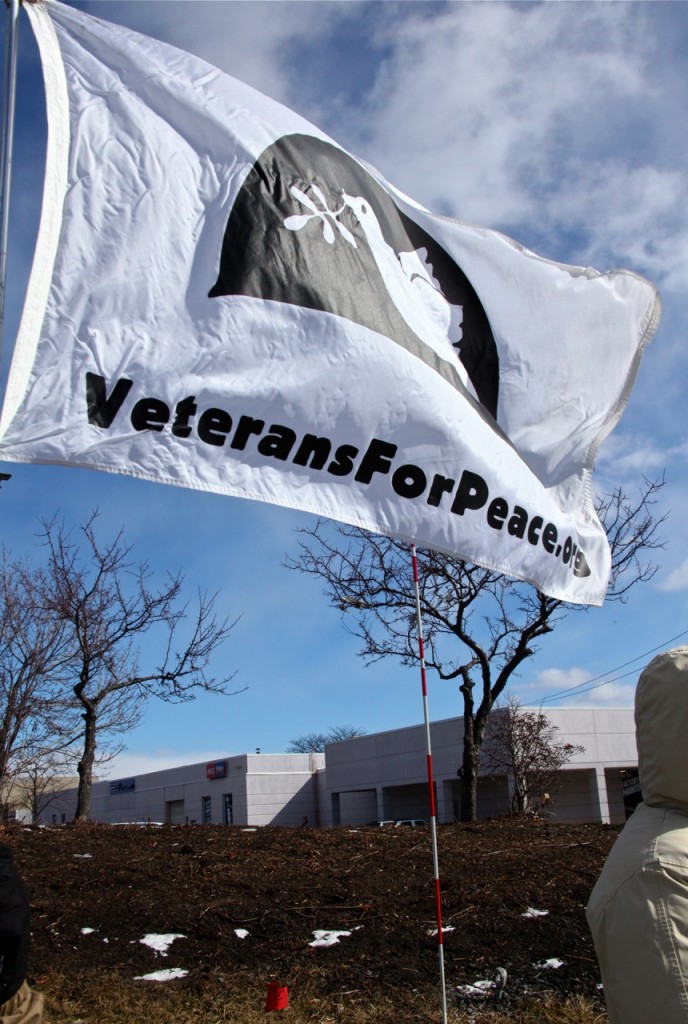 This sense of joyful purpose in standing together in the cold and in solidarity with both supportive passersby as well as those who need our embrace globally was also reflected in the comments of Grannies Sister Francine Dempsey and Dot Richards respectively:
“Bright sun in the sky, support from drivers going by — Grannies know love will conquer all”
“Cold hands, warm hearts.  The sun shone on hardy Valentine’s day peace activists and happy honkers alike.” 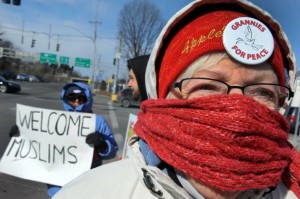 And finally summed up by Granny Maud Easter
“When Grannies and friends speak from the heart about refugees as human beings who need our support and welcome, I think everyone hears the voice of their own grandmother and listens.” 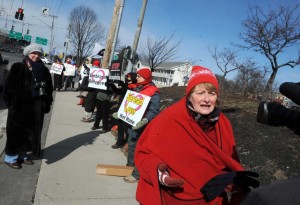 This was the Statement of purpose that Maureen shared with the media who arrived to document the vigil:

“We are standing here today for a few brief moments in the cold because even as we stand some 60 million refugees are seeking safe shelter for themselves and their families, made homeless by such forces as war and climate change.

We are standing here together because we are convinced that the foundational principles of our nation absolutely remain counter to a public discourse and policy which is founded on fear, hatred and human division: race hatred, religious hatred.

We are standing here because we are convinced that our well being as a nation cannot rest on policies of exclusion developed out of any hate filled discourse and fear mongering.

Ours is a resounding ” YES” spoken in opposition to the politically motivated ” no” of those who would call for walls as they foster a negative approach to our fellow Muslim Americans or those refugees who seek and desperately need asylum from the horrors of war, especially when our actions as a nation have often helped precipitate the conflicts which so many innocents are fleeing.

Some politicians would build momentum on fear and on the false notion that “talking tough/ being hard nose” will keep us safe. The truly hard task is determining and putting into policy and practice all of the ways we can say YES in a determination to preserve our basic principles, freedoms and security.

We are standing here in the cold today with warm hearts determined that most Americans want to live in a country which fosters human global community, sister and brotherhood and determined outreach to those who are suffering, often as a result of wars we have as a nation fostered. Nineteen stalwart Grannies for Peace and friends representing so many in the regional community who stand in heartfelt opposition to Islamophobic and anti – refugee rhetoric, braved sub zero temperatures and a threatening wind chill to stand on the corner of Wolf Road and Central Avenue on Saturday, February 13th for the 10th Annual  Grannies for Peace Valentines’ Day Vigil.” 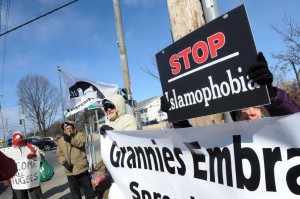 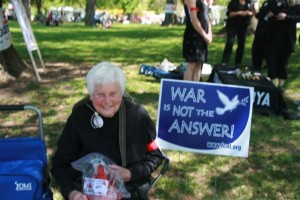 Editor’s note: One person not pictured in this article is the incredibly active and dedicated peace activist Pat Beetle.The oldest member of our peace and justice community.  Even though she currently has some mobility problems she arrived at the vigil but was persuaded not to stand in the cold.  So instead, Pat drove around and around the vigil honking in support and adding greatly to the spirits of those standing vigil. 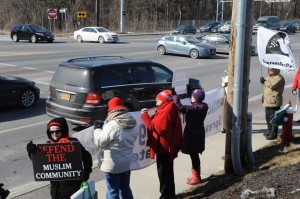