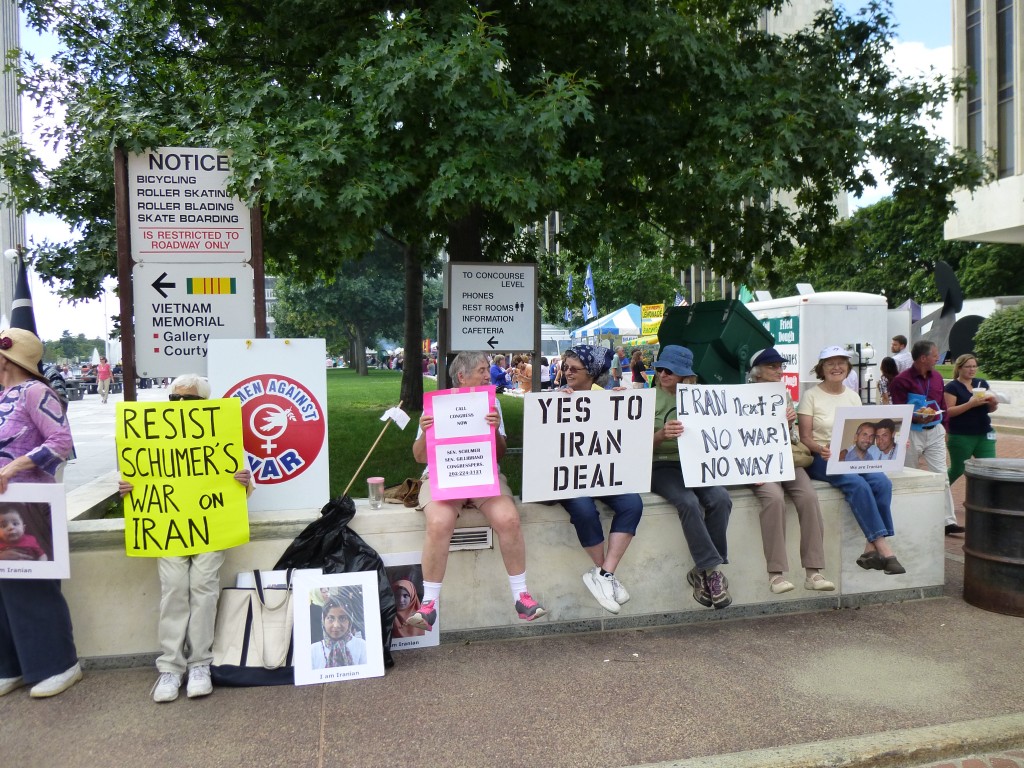 On the wall to change Chuck’s mind, photo by Marcia Hopple 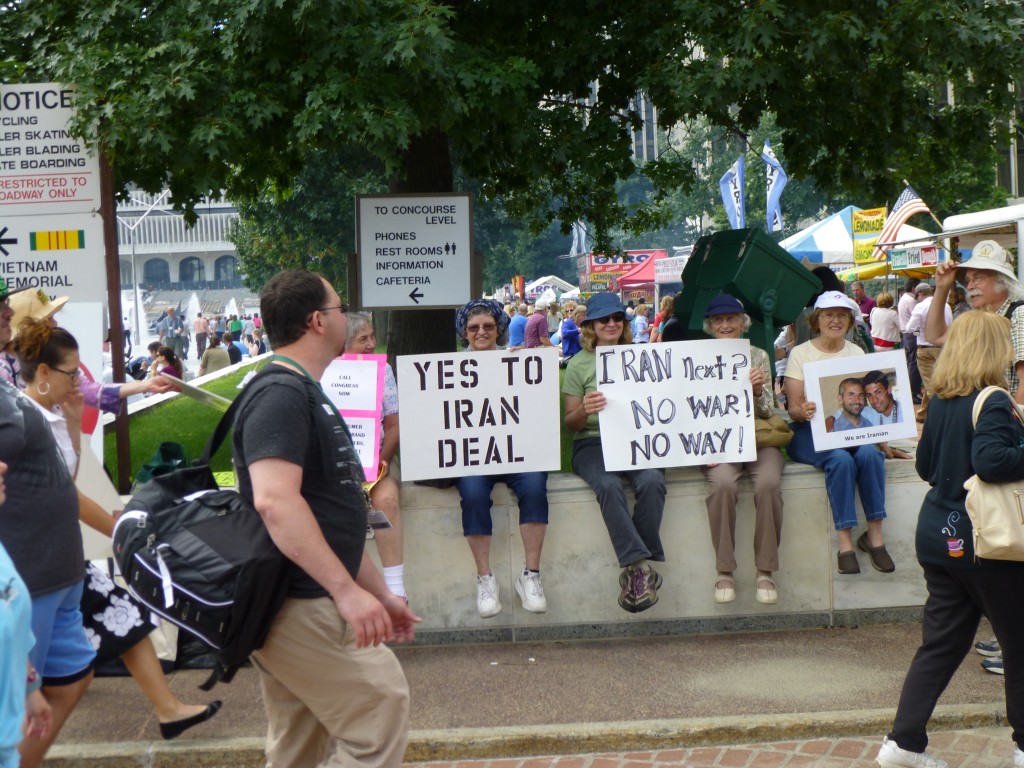 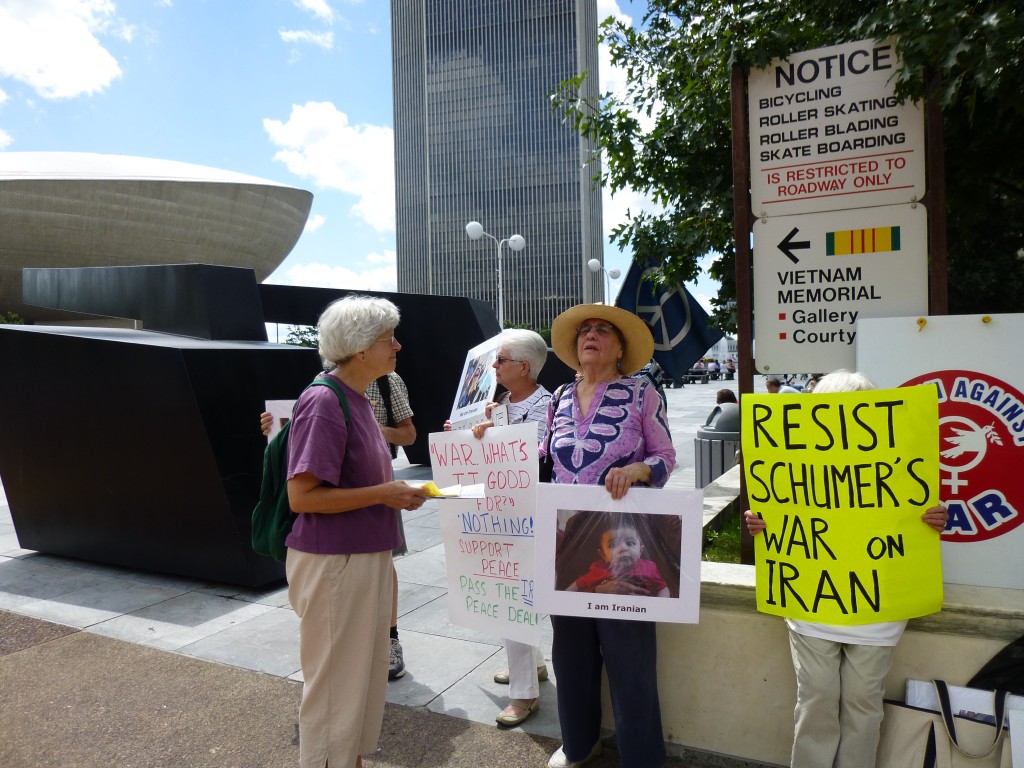 Early in the vigil on August 12, 2015. Sue D. Tom, Alexandra and Mickie. Photo by Marcia Hopple

Each year at the I Love NY Food Festival members of the Iran Project, and our allies from other peace and justice groups, vigil and leaflet for peace with Iran through diplomatic actions instead of threats of war and sanctions.  During the past few years when the interim peace agreement was reached in April of 2014 and then the Joint Comprehensive Plan Of Action was finalized in July of 2015 this information and education has been especially crucial. 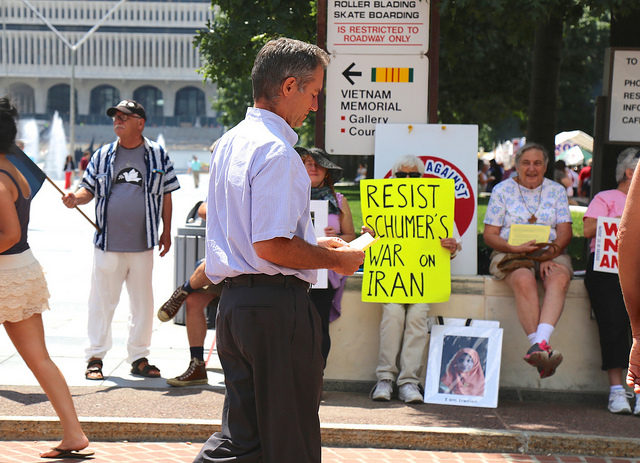 Reading our leaflet during the vigil, photo by Alice Brody 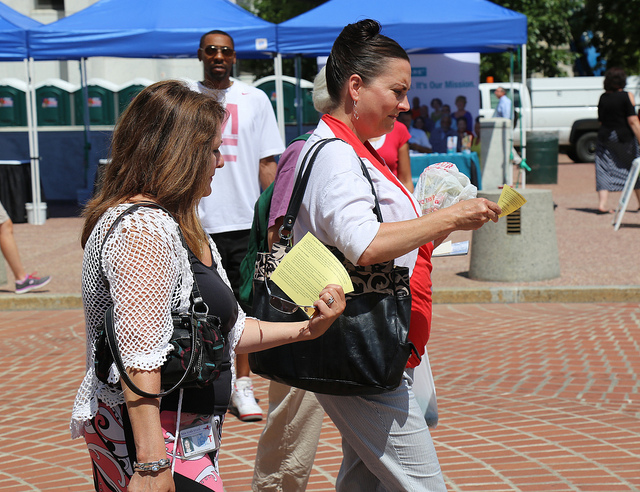 This year we distributed leaflets that urged the US Congress to approve the nuclear and sanctions agreement with Iran.

This year’s vigil was very successful in many ways.  We had approximately 20 people from several different groups and the crowds were plentiful.  There were more restrictions on where we could stand, however and we weren’t allowed to set up the table that we had planned for helping people call their Senators and Representatives.  This was all new to us but in spite of it we gave out about 400 leaflets and had many good conversations with people who stopped to talk with us. 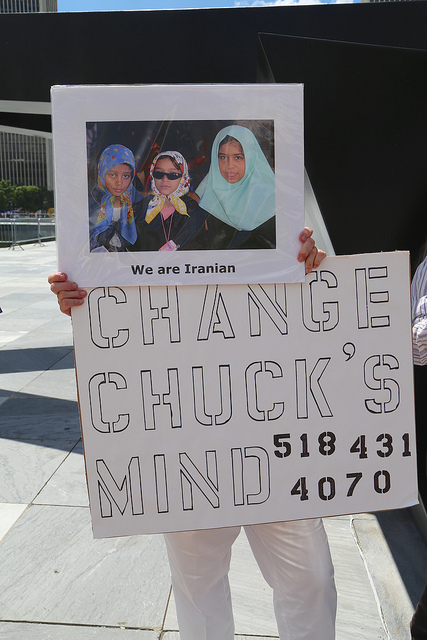 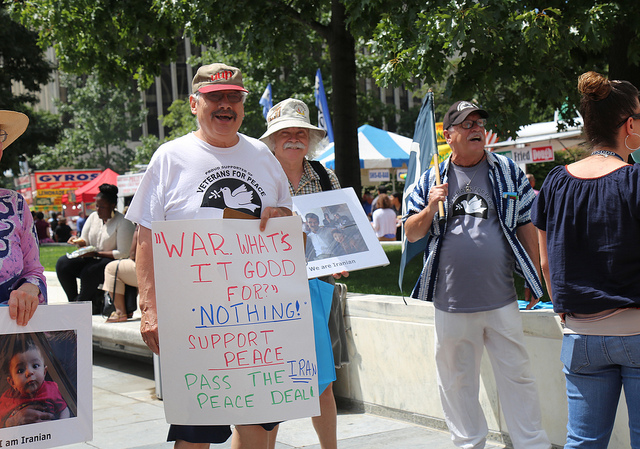 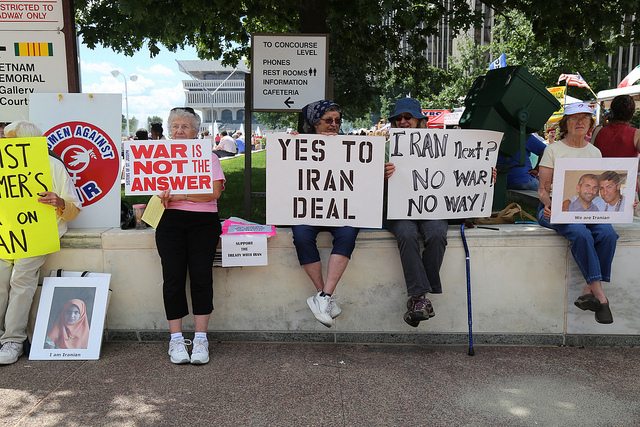 This is the most variety we’ve had in people taking turns leafleting and talking with passersby.  It was satisfying to be there and to be joined by such dedicated people.  Special thanks to Marcia for coordinating and doing so much planning, to Fran for copying the leaflets, to Sue D. for arranging the information about calling your Congressperson and bringing the table,To Sue C., Fran, and Doreen for their dedicated leafleting,  and to all who made and held signs.  It was colorful, attention getting and (I agree with Alice) we got people to pay attention.

Alice Brody and Marcia Hopple took some photos at our demonstration. It was a good one although they wouldn’t let us set up the phone calling table that Sue brought.  One State policewoman actually asked one of our leafleters to “keep moving!” but none of the rest of us was bothered.  We had a lot of people from other groups, including Tom Ellis, Doug Bullock, Melanie Pores and Fred Pfeiffer, Trudy Quaif, Dan Wilcox, Joe Seeman. Plus members of the Iran Project, including Hazel, Kate, Fran, Doreen, Marcia, Sue Clark, Pat, Alice, Dinah, Sue Dubois, Alexandra, and Mickie. A young relative of Dan’s also stopped by and held his peace flag for a while. 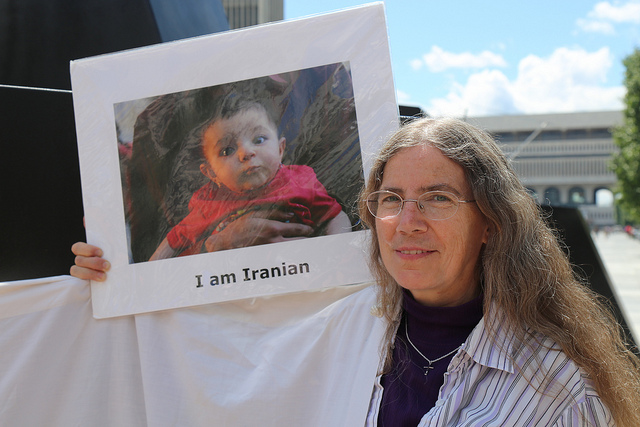 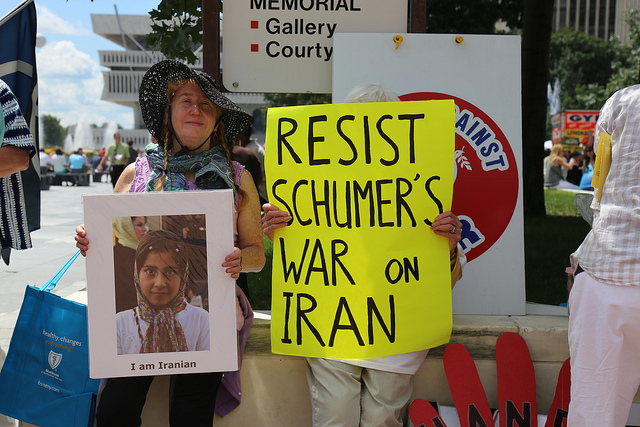 Melanie, Pat and Marcia’s back. photo by Alice Brody. 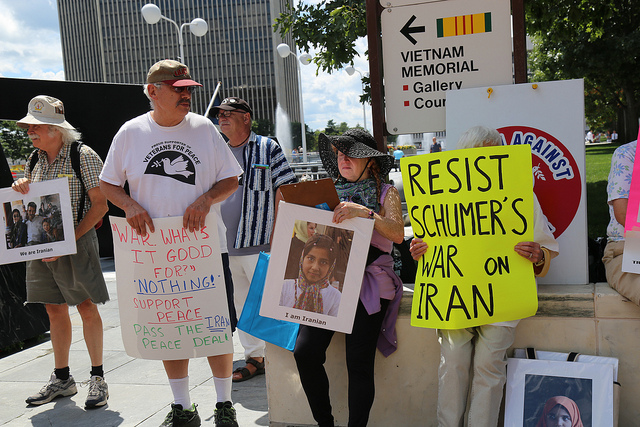 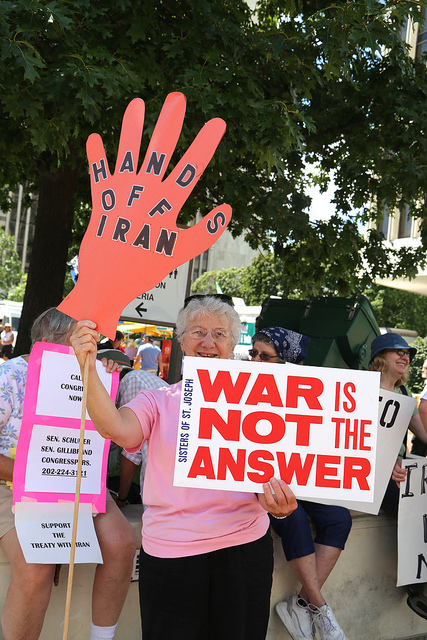 Doreen in the foreground and Fran in the background. Photo by Alice Brody 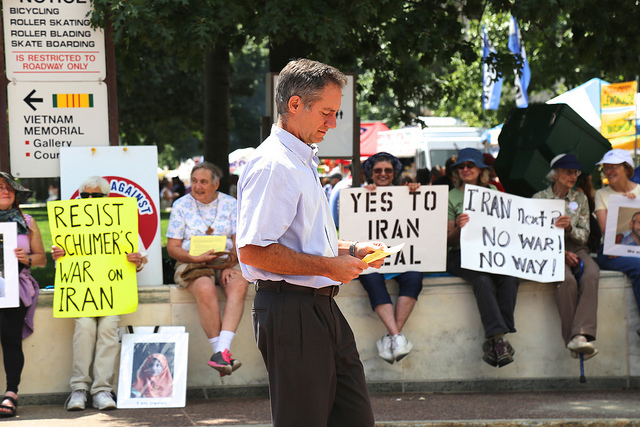 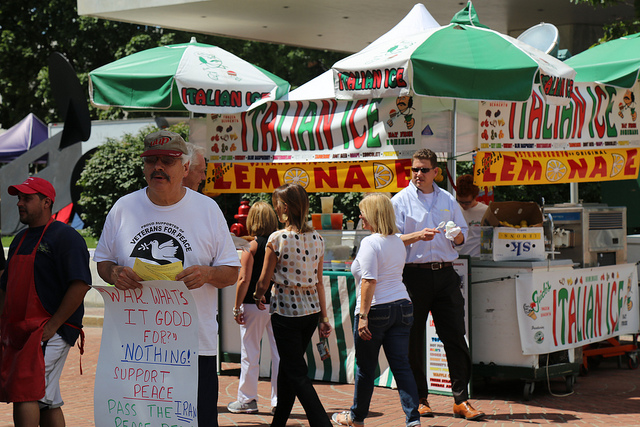 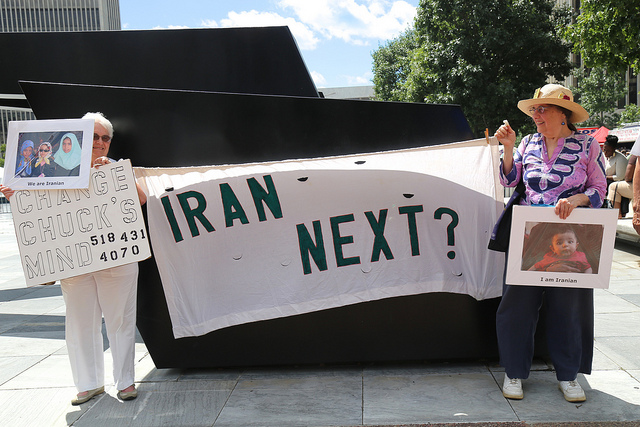 You can follow this link to read our Waging Peace blog article and find out more about what the situation was in Congress during the third week in August.