Our gathering was held at St. Andrew’s Episcopal Church, 10 N. Main, Albany. A perfect venue to accommodate all of the people and activities planned for the evening. 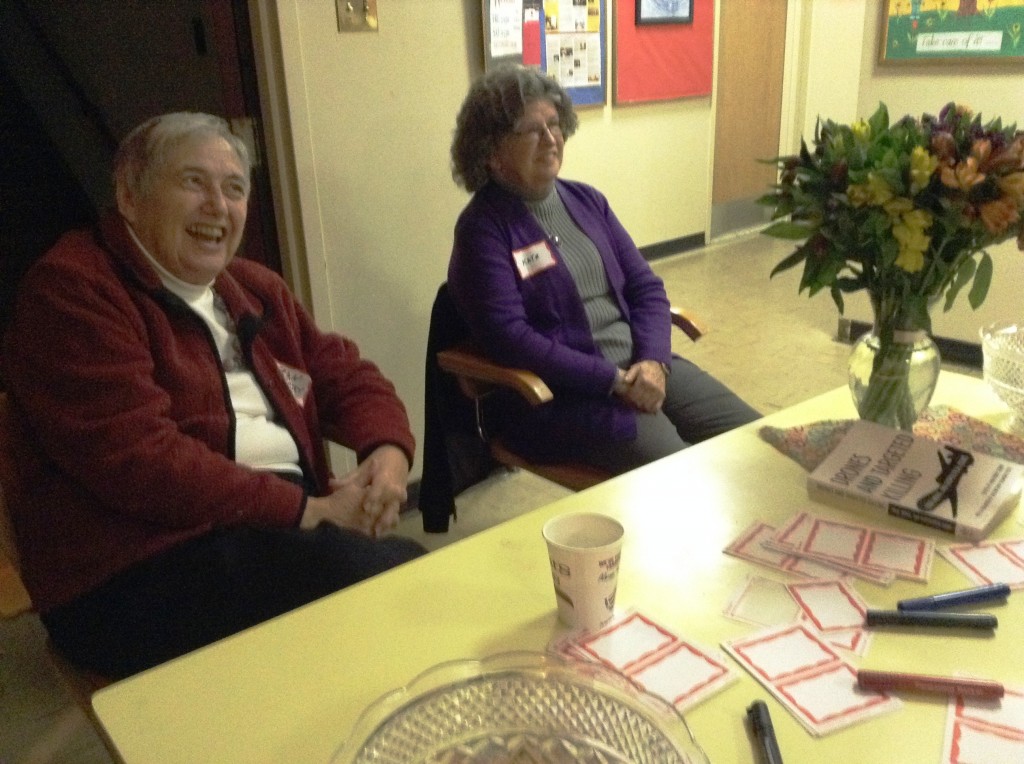 Fran and Kate taking donations at the door, photo by Doreen Glyn

The evening began with a potluck of savory and sweet finger foods and a chance for people to catch up with each other and hear more about the activities of the several groups represented by people there to honor Mabel and to hear the ideas of our keynote speaker, Marjorie Cohn. 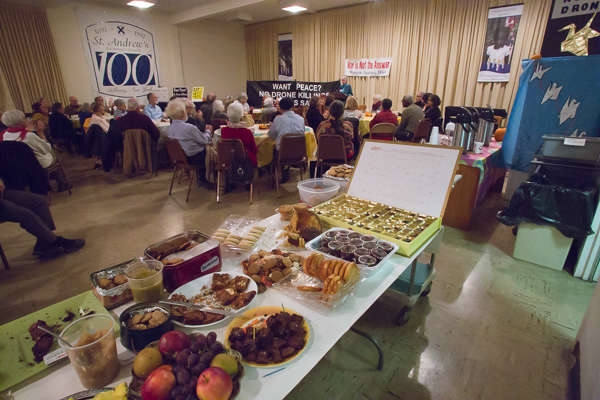 View of the front of the room, photo by Connie Frisbee Houde

Gallery of photos by Priscilla Fairbank: 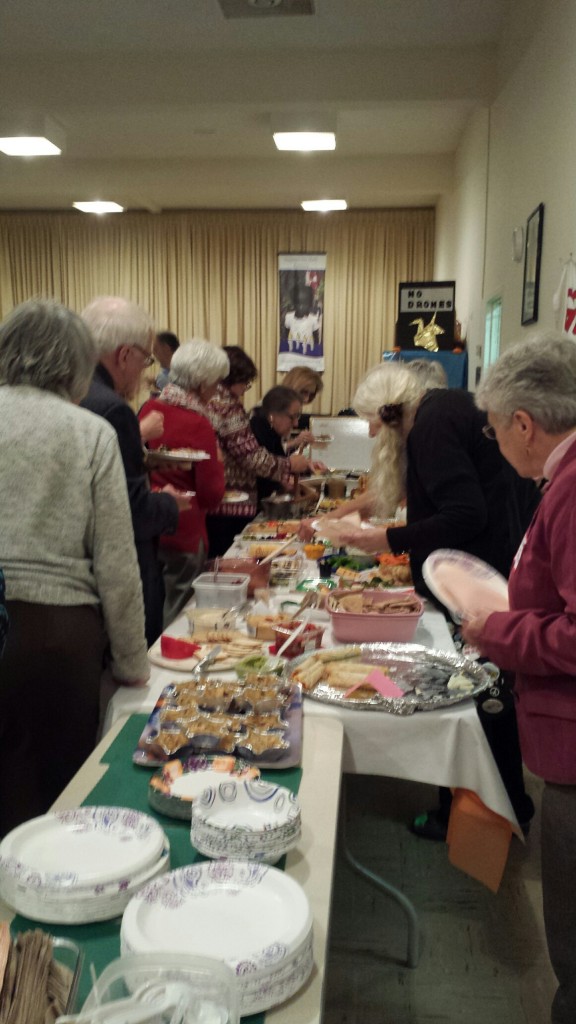 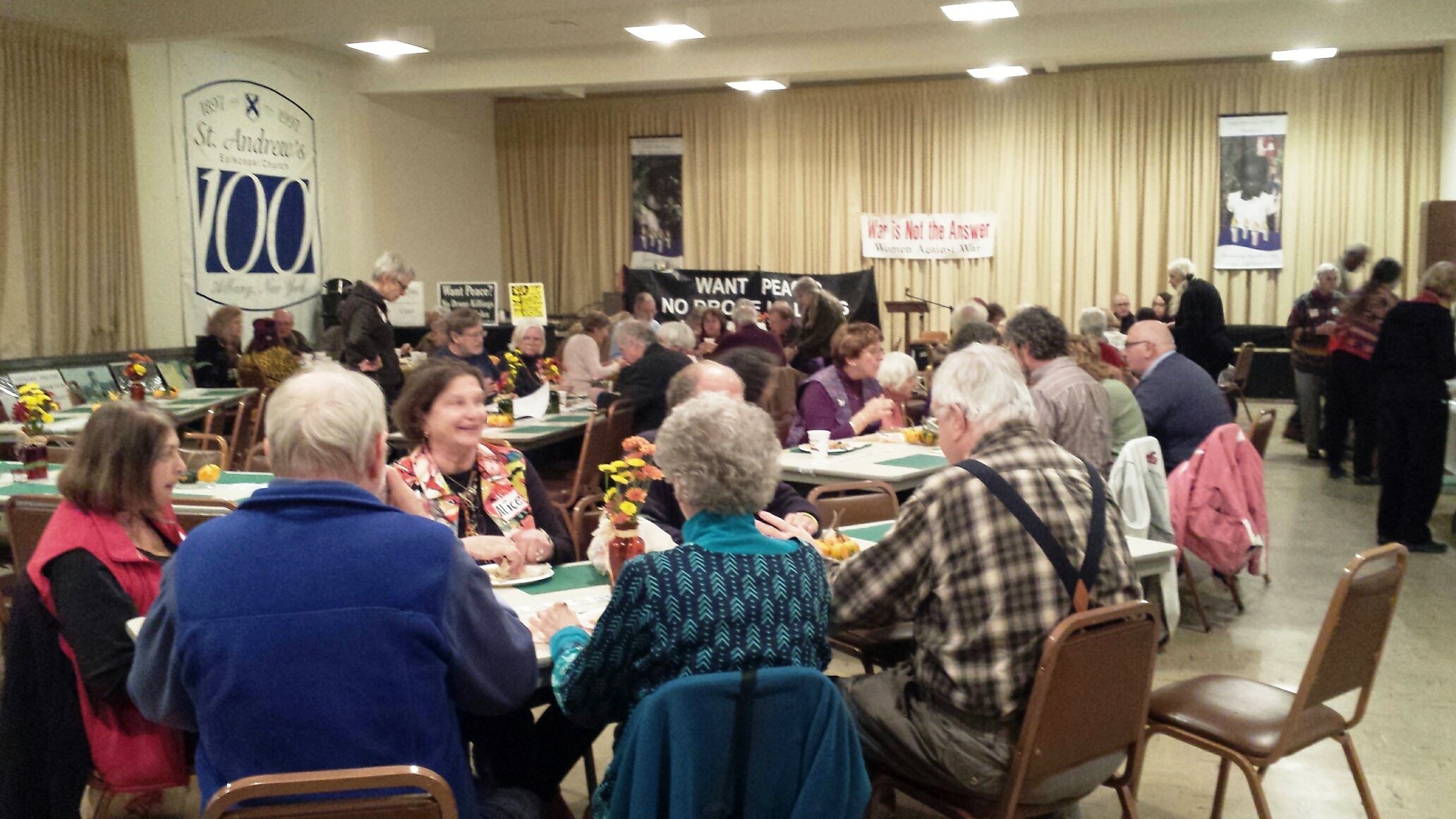 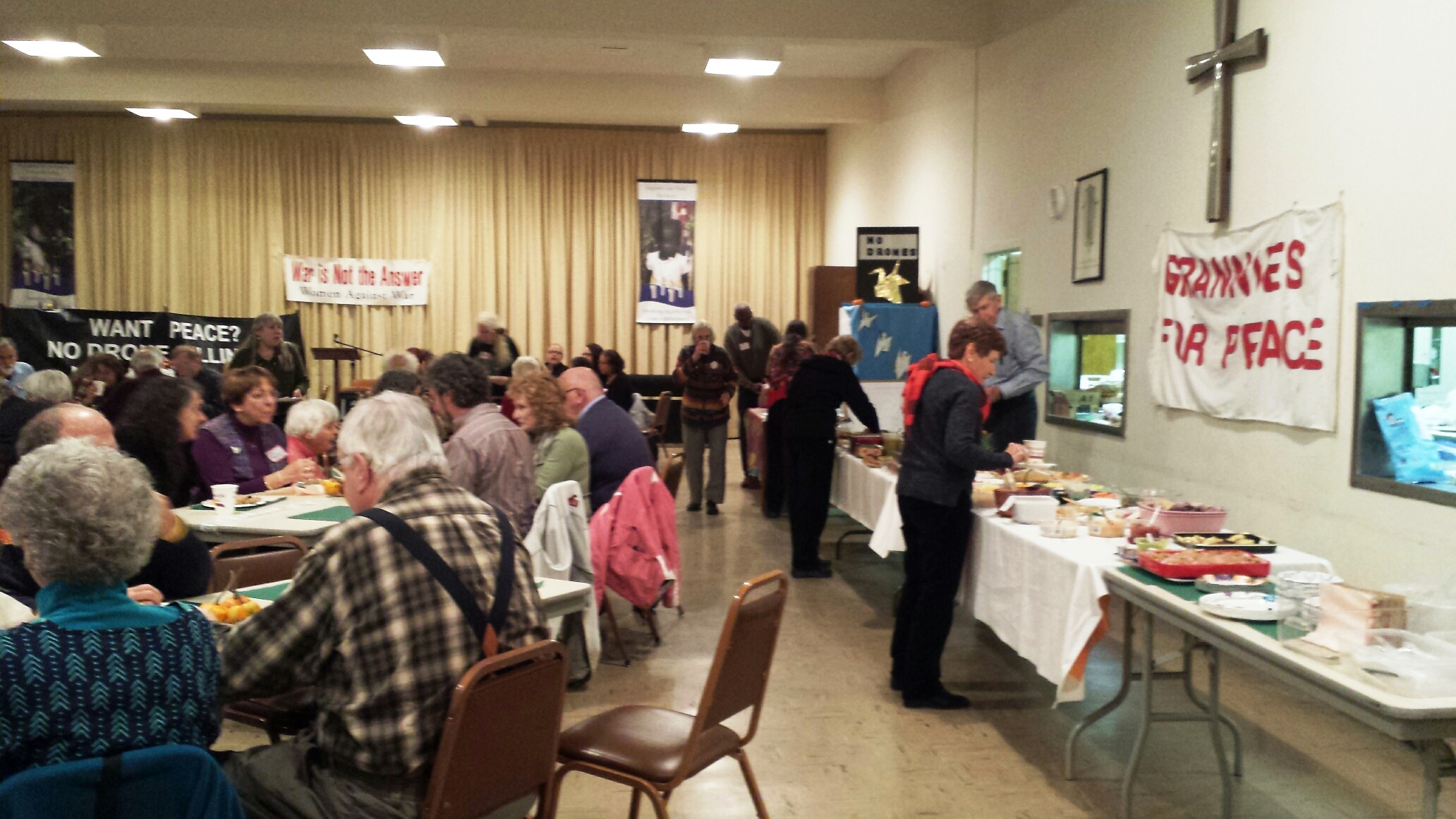 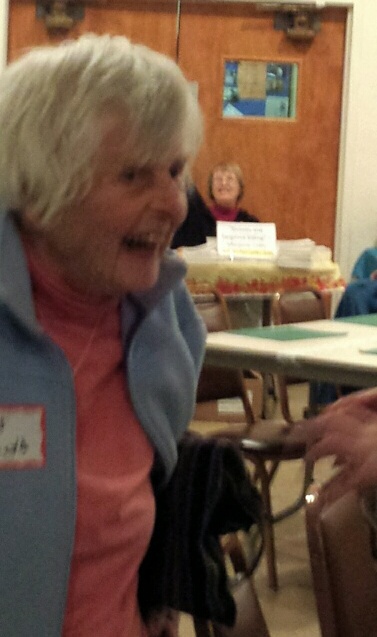 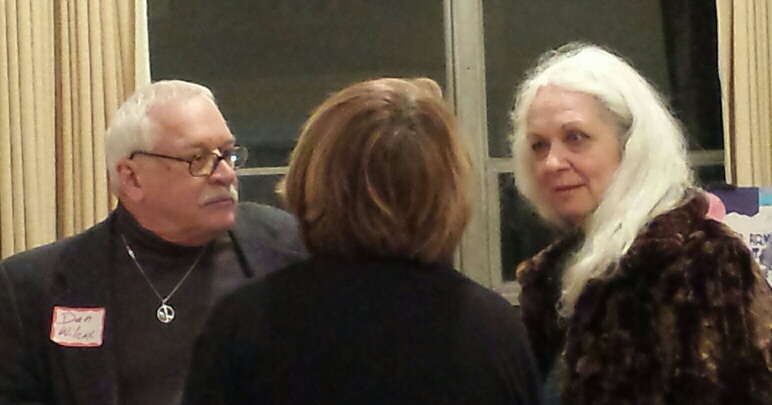 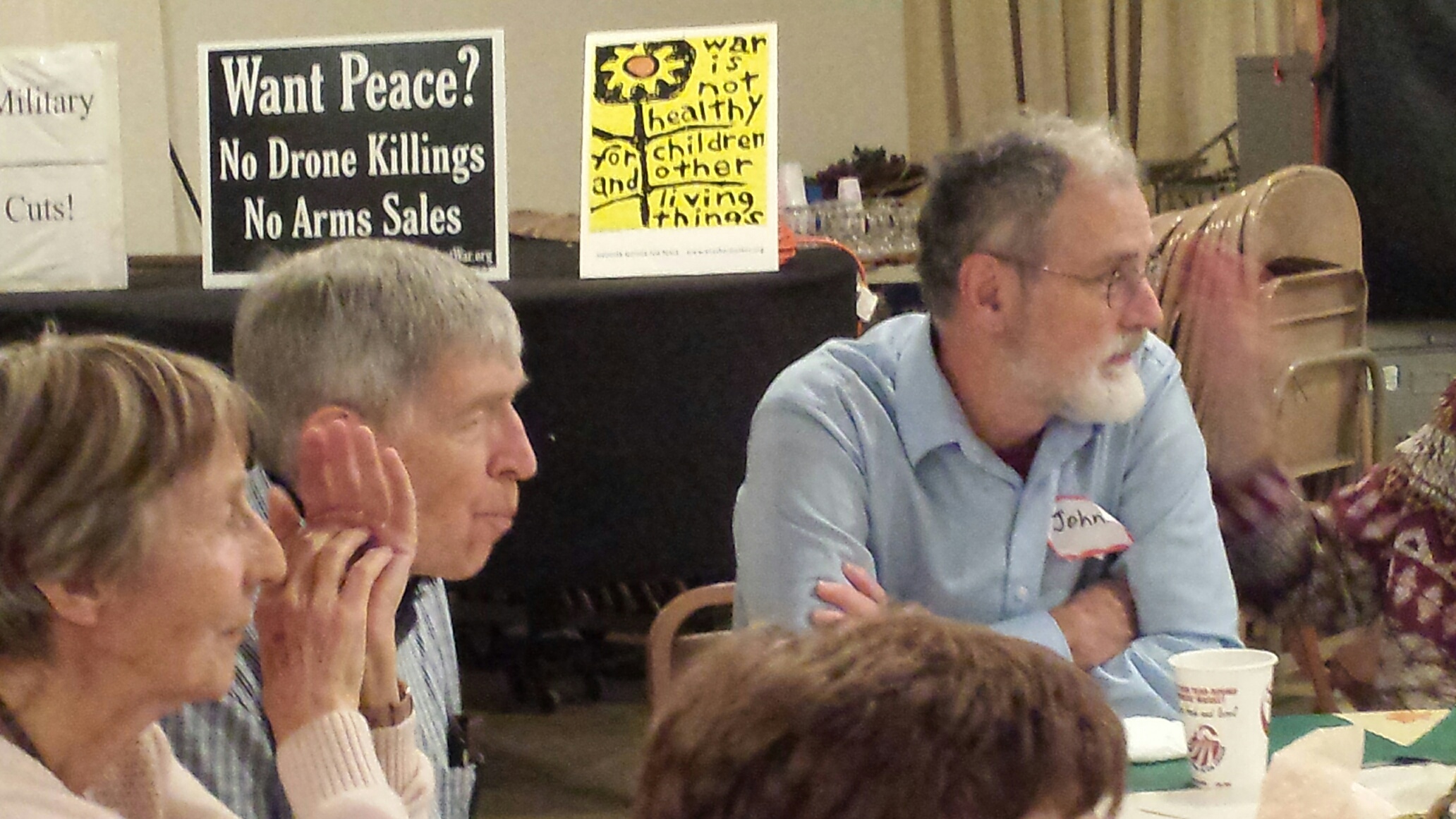 The program then went on to include a report of Women Against War’s 2015 projects and activities by Maud Easter. 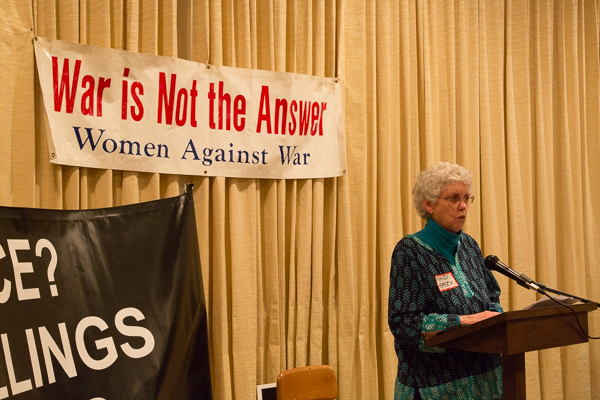 One piece of new business that Maud announced was the appointment to the Women Against War’s steering committee of Kate Cavanaugh. Kate, who is a very active member of the Iran Project and a Professor Emerita of Saint Rose College, replaces previous steering committee member Saira Kahn who has finished her Master’s degree and moved to New York City in August, to work as a Budget Analyst in the NYC Mayor’s Office of Criminal Justice. 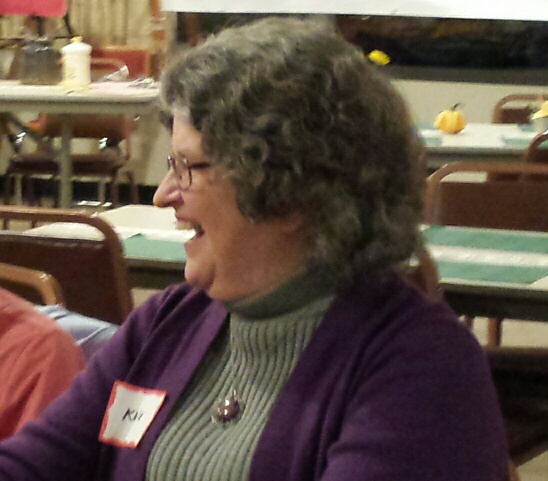 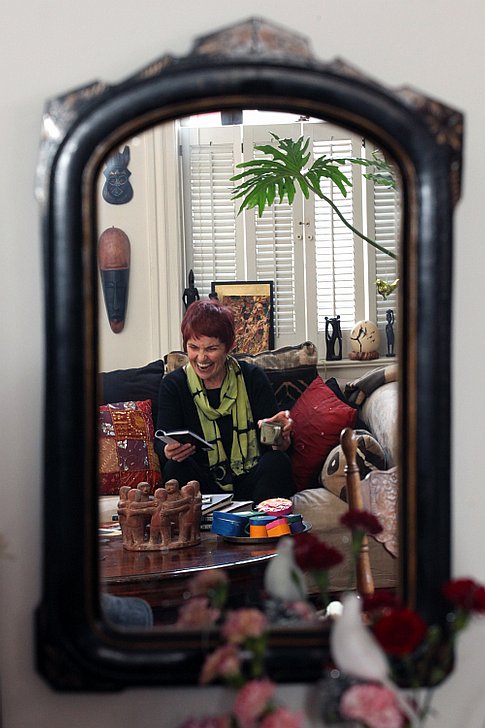 Mabel at home in 2011, photo by Daily Gazette

Mabel was briefly described in the outreach materials as follows:

An impassioned and lifelong activist, photographer and artist, Mabel strengthens Women Against War, Grannies for Peace and the entire social justice community through her creativity and commitment.

All this and more is true of Mabel but the introduction by Maureen Aumand brought more ideas and feelings to light. Maureen particularly focused on Mabel’s long time dedication to the Pastors for Peace annual Caravan of medical supplies to Cuba and her love and support for the Cuban people long suffering under a cruel US embargo. 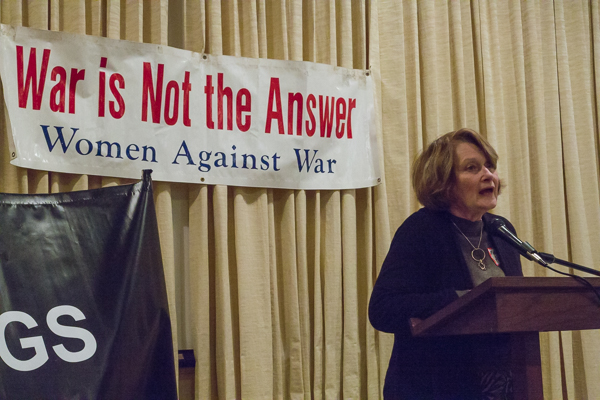 In this context, Maureen shared a short poem by Cuban activist and artist Jose Marti.
I Cultivate a White Rose
By Jose Marti

And for the cruel person who tears out
the heart with which I live,
I cultivate neither nettles nor thorns:
I cultivate a white rose. 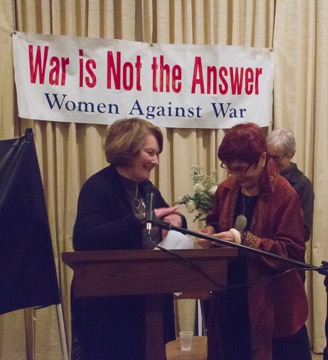 Here’s another quote from Jose Marti that shares some of the spirit of Mabel’s work and the goals that we all try to achieve here in the Capital District peace and justice community:

We are free, but not to be evil, not to be indifferent to human suffering, not to profit from the people, from the work created and sustained through their spirit of political association, while refusing to contribute to the political state that we profit from. We must say no once more. Man is not free to watch impassively the enslavement and dishonor of men, nor their struggles for liberty and honor. 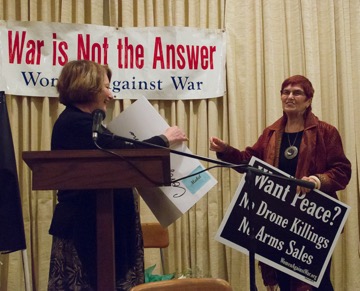 Maureen is holding a giant card with a great photo of Mabel as” Miss – Appropriation” during a Schenectady Neighbors for Peace “I Miss America” pageant.
Marcia Hopple spent much of the time during the potluck circulating the card for signatures so that everyone could write a personal message to Mabel as part of honoring her. Kudos to Marcia for her dedicated work on this! 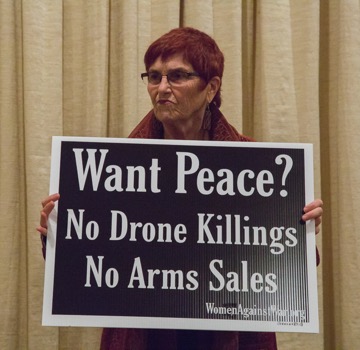 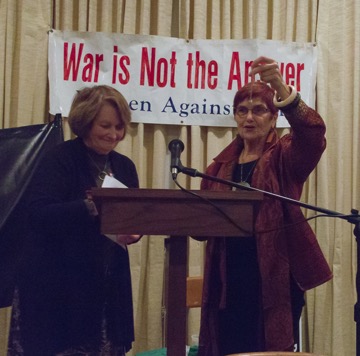 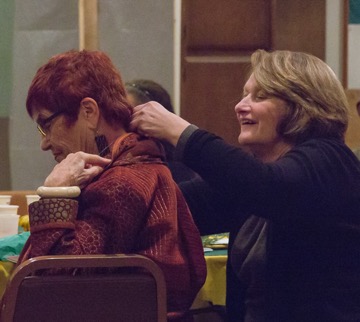 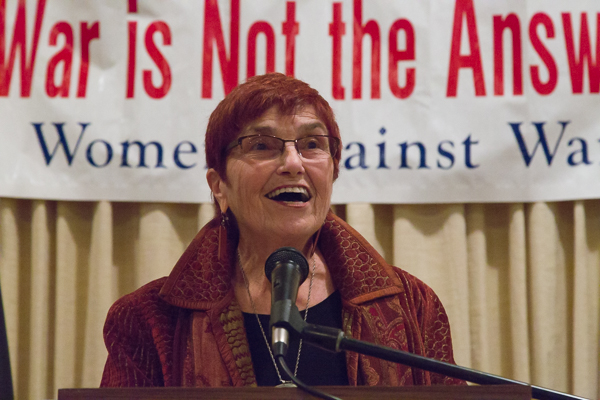 Mabel’s acceptance speech was inspiring.  She explained her reluctance to accept the award because she felt that she was just one person who worked as part of a large community of peace and justice activists and she went on to name and acknowledge the work of many in Women Against War and some of the other groups that we often work in coalition with.

There was much more including an invitation to take and distribute/display some of the new yard signs which she played such a large part in producing and obtaining funding for.
But the ending of her speech was a powerful call to action in which she defined some of the most important goals for our continuing work:

1. It is critical that all activists be informed and understand the interconnectedness of all issues related to peace and justice- including the corporate war economy, militarization of our society, inequity;  immigration, racism, mass incarceration, women’s rights and climate change.

2. As we address the pressing issues of peace saying No to Drone killings and No to arms sales, we must build coalitions joining with others in the local struggles of low wage workers, Black Lives Matter, immigration rights, climate change and ending mass incarceration.

3. To do this, we must nurture each other, face despair with action and remember to celebrate life

Fran Dempsey stepped up to introduce our speaker, Marjorie Cohn. 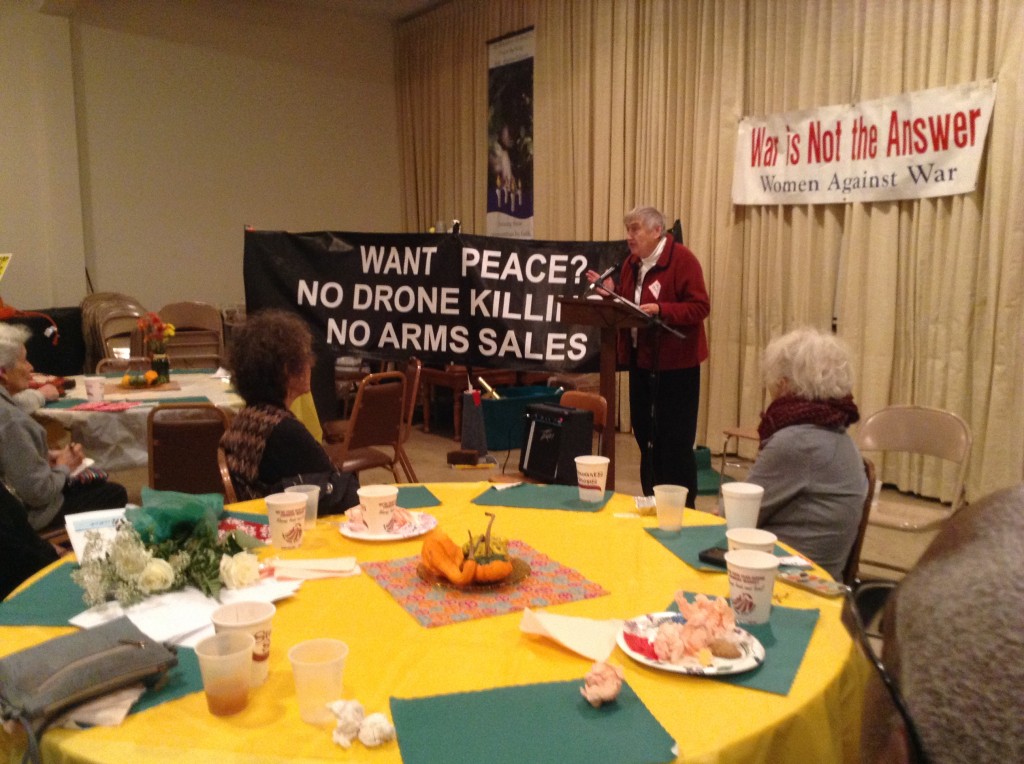 From Fran’s eloquent introduction we learned that Human Rights Lawyer Marjorie Cohn is also an author, journalist, media consultant and speaker on topics of international human rights, and US foreign policy. She teaches at the Thomas Jefferson School of Law and is a former President of the National Lawyers Guild.  Marjorie also serves on the Advisory Board of Veterans for Peace. 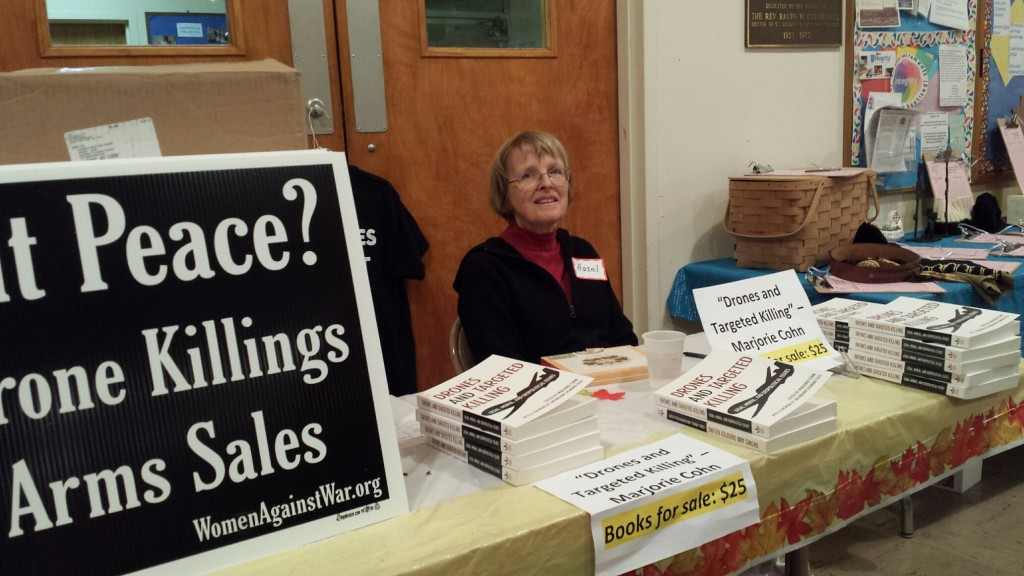 Her most recent book, which Hazel assisted people to purchase, is an edited collection of articles about the use of weaponized drones titled DRONES & TARGETED KILLING: Legal, Moral & Political Issues. The many excellent articles serve as a key resource for anti-drone activists. Bishop Desmond Tutu’s forward says,

This book provides much needed analysis of why America’s targeted killing program is illegal, immoral and unwise. 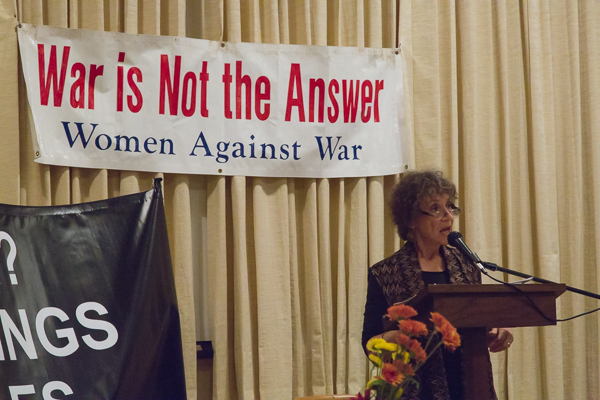 Marjorie Cohn speaking with banners in the background, photo by Connie Frisbee Houde

Rather than detail the content of her inspiring and resource filled speech I’ll link to one of her most recent articles which contains much of her content.  You can also read more about The Drone Papers recently based on information released by a whistleblower from the intelligence community and more about Marjorie Cohn in general in this article published in our blog called Waging Peace.. 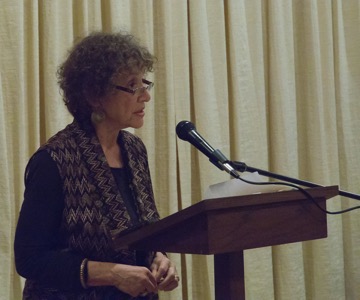 Marjorie Cohn speaking about her article:
“‘The Drone Papers’ Revelations Are a Cry for Ending the Slaughter” Photo by Connie Frisbee Houde

While Marjorie was in the Capital District she was quite busy, speaking at three local venues and doing a radio interview on WAMC’s Roundtable as well.  So her message was spread far and wide, at UAlbany, Albany Law School and at the Forum of First Unitarian Universalist Society of Albany.

Finally here are a few more of Priscilla’s photos of people working, announcing, and meeting at the annual dinner. 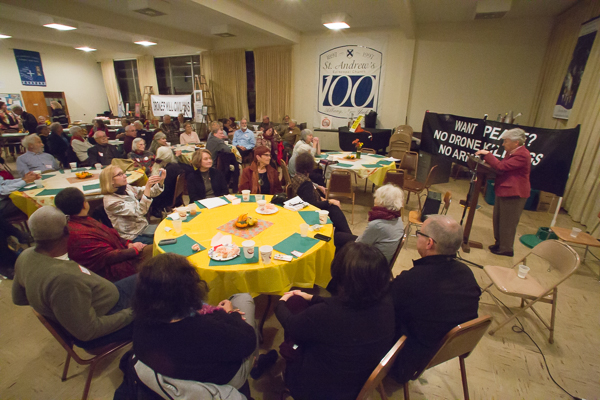 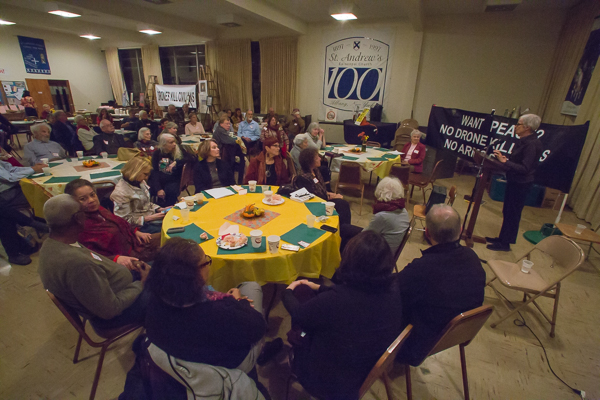 Marcia Hopple and the audience during announcements 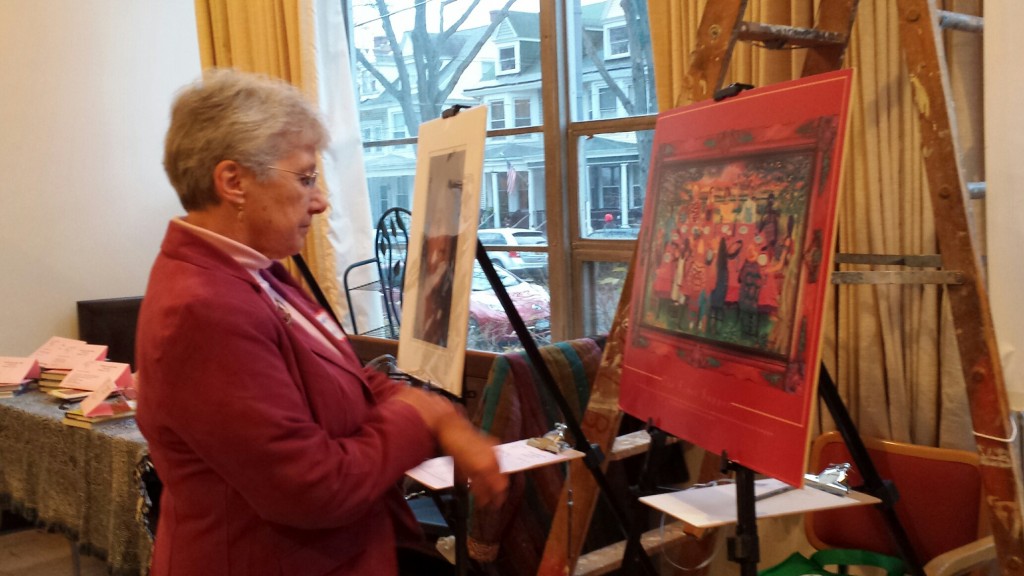 Doreen looking over the silent auction items, which Linda LeTendre auctioned with her usual humor and effectiveness! 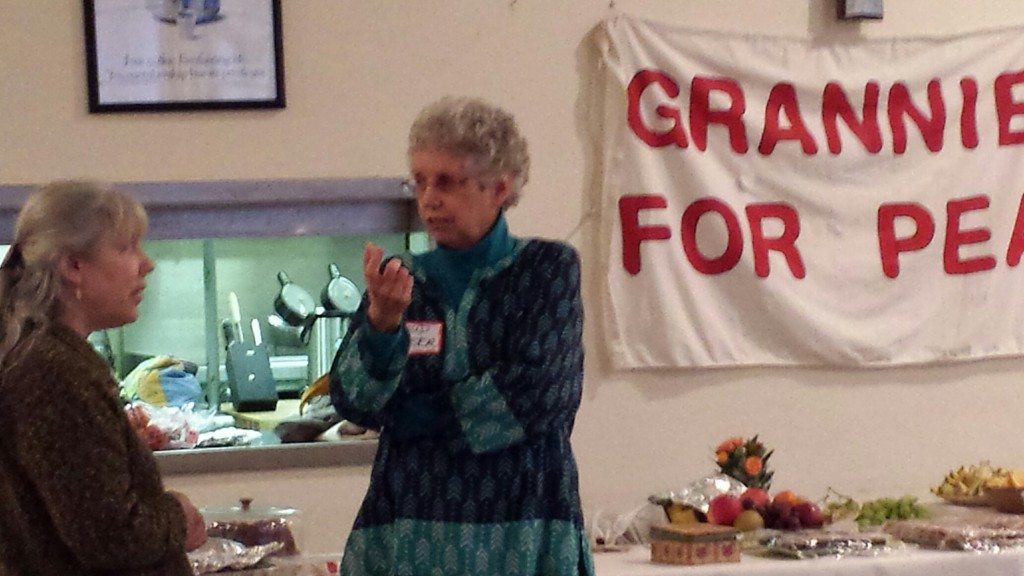 Maud and Elaine at the dessert end of the buffet table. 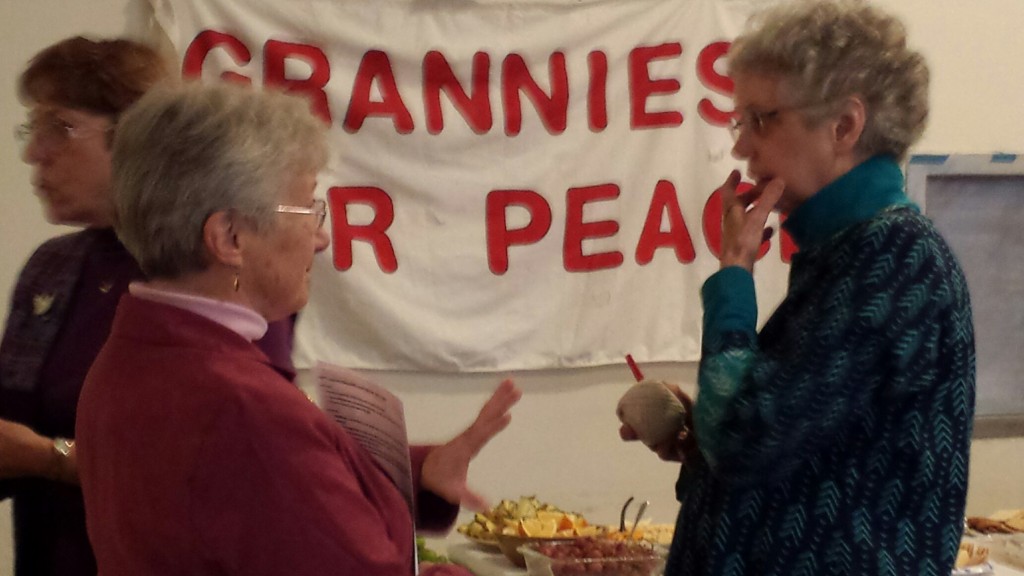 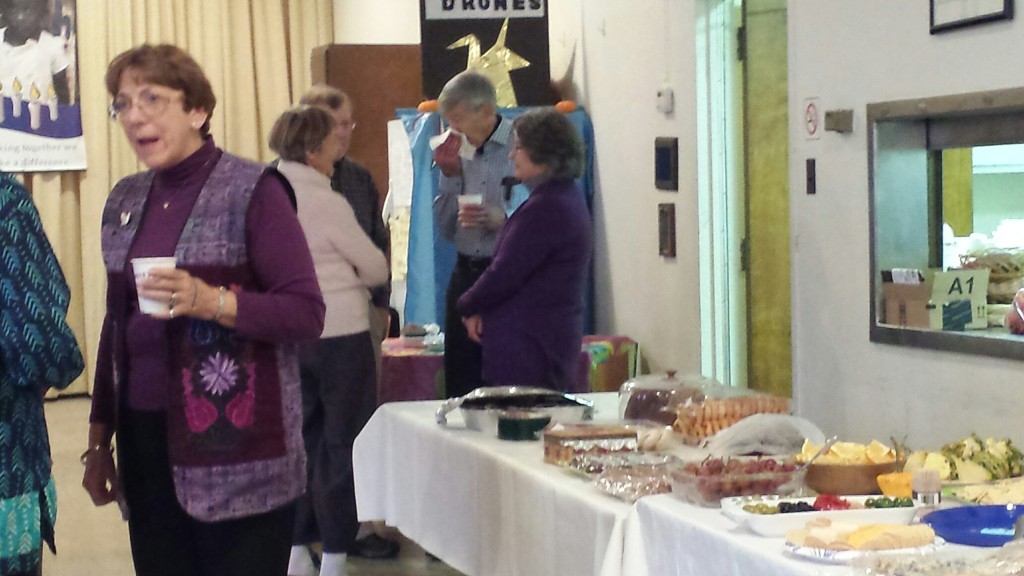 Joan Thornhill, art and props arranger and kitchen worker, supreme. Who along with her husband Harry helped set up Mabel’s props and signs and kept coffee and other beverages going all evening!