Women Against War demonstrated and leafleted with full numbers from 12:30-1:30 PM, Wednesday, August 10, 2016 at the annual Empire State Plaza Food Festival. But some of us actually stayed a bit longer to continue to leaflet and take photos. 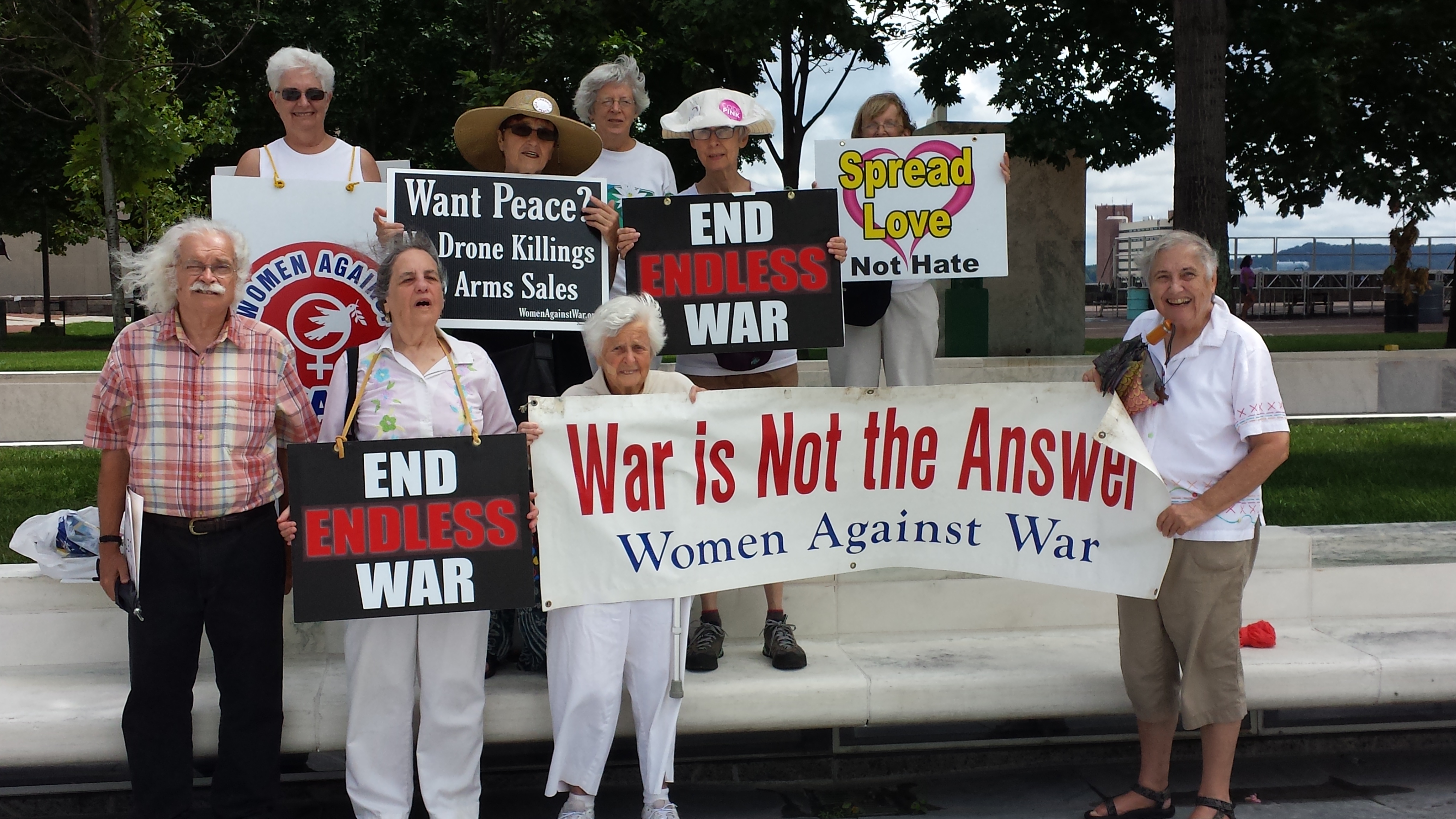 Our props consisted of our banner, signs, a Women Against War Sandwich Board  (worn for the full hour on a windy afternoon by Alexandra), and some of Diane Reiner’s  beautiful enlarged photos of Iranian people. There were a baker’s dozen of us; standing with expressive signs, including a homemade, two sided sign that ally and anti nuclear weapons activist, Tom Ellis held. . One side read, “We can build a vastly better world;” the other, “We are tired of endless war, foreign and domestic.” 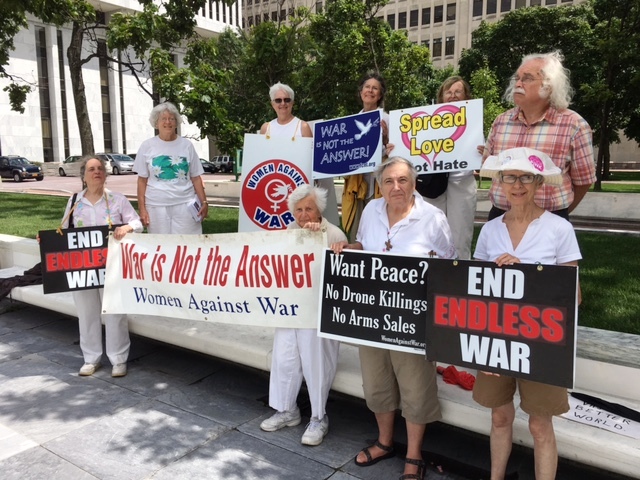 Iran Project Vigil at the end of the demonstration. Not in photo: Sue, Mabel, Leila and Dinah. Photo by Mabel Leon

One of the highlights of this particular annual vigil has always been the number of leaflets that we can distribute to people flocking to the I Love NY Food Fest as they come to buy prepared foods and produce. To walk and meet and lunch and munch.

With rain threatening there were fewer passersby than usual but more leafleters took turns giving out the beautiful leaflets with a color photo of the international negotiators of the Joint Comprehensive Plan of Action with Iran. 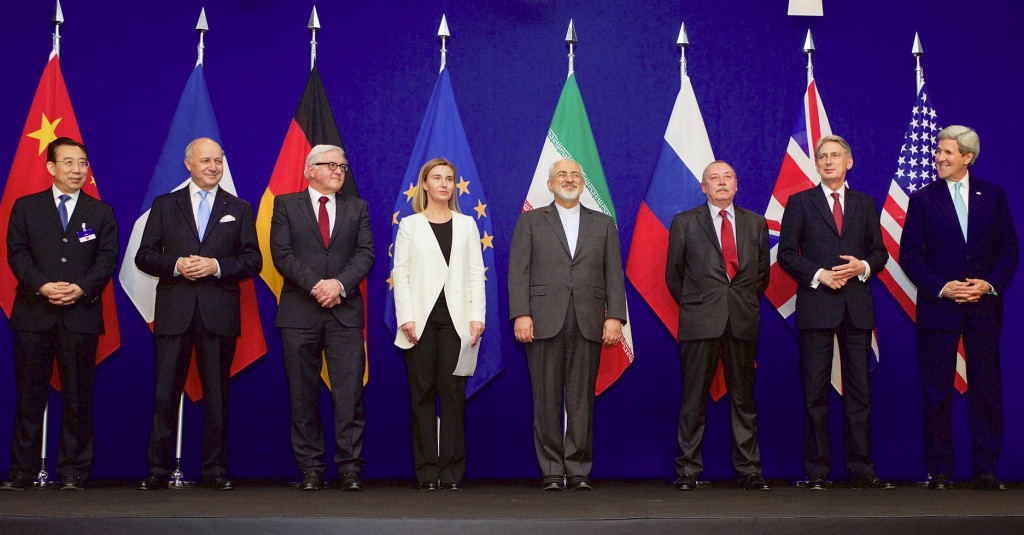 Negotiators of the Iran nuclear deal from China, France, Germany, The European Union, Iran, Russia, the United Kingdom and the United States, April 2, 2015

In the media release, demonstration organizer Marcia Hopple explained, “Women Against War is asking citizens to insist that candidates for presidential and congressional elections this November will say NO to endless war and say YES to diplomacy as the first and most powerful tool in international relations.”

Another long term concern of Women Against War has been arms sales, which WAW considers a huge contributor to the problems in the Middle East. As well as an obstacle to negotiated settlements of regional conflicts.  As long term Women Against War activist Pat Beetle has succinctly said: “Let’s not let arms contractors determine our foreign policy.”

Iranleaflet2016, two sided.Women Against War’s leaflet also asked readers to really look at the US military budget, which continues to be larger than all other aspects of the US discretionary budget combined.  It suggested asking candidates to pledge to reduce military spending.

This year’s leaflet came about through a creative and interactive first draft crafted by Iran Project member Kate Cavanaugh. It was then edited by some of the other key vigil planners.  Marcia took responsibility for printing the striking,  two sided leaflets with their attention getting color photo.

The result was a leaflet that we plan to continue distributing during the entire political campaign season – with its action suggestions and basic facts.  One person (a booth holder) came up to us and thanked us for including actual ways that people could act on the requests for policy changes. In general the responses to our leaflets were more positive than ever before. People who took leaflets read them carefully, leading to several long conversations and commitments to doing more research to develop better understanding.

Although there wasn’t official media coverage, one of the Times Union photographers (Jasmine Robinson) included a picture of Leila and Mickie with their signs in a “were you seen” feature about the Food Festival. 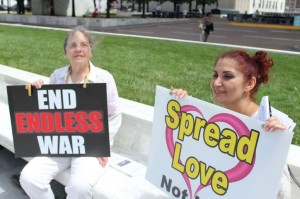 “Spread Love Not Hate!”
Leila and Mickie at the NY State Food Festival, August 10, 2016. Photo by Jasmine Robinson of the TU

Thanks to Marcia, Priscilla, Alexandra, Kate, Fran, Sue C., Pat, Tom, Leila, Sue D.,, Dinah, Hazel,  Mabel, Mickie, and all of those behind the scenes who supported this action in various ways. Including a local church that allowed us to park nearby, 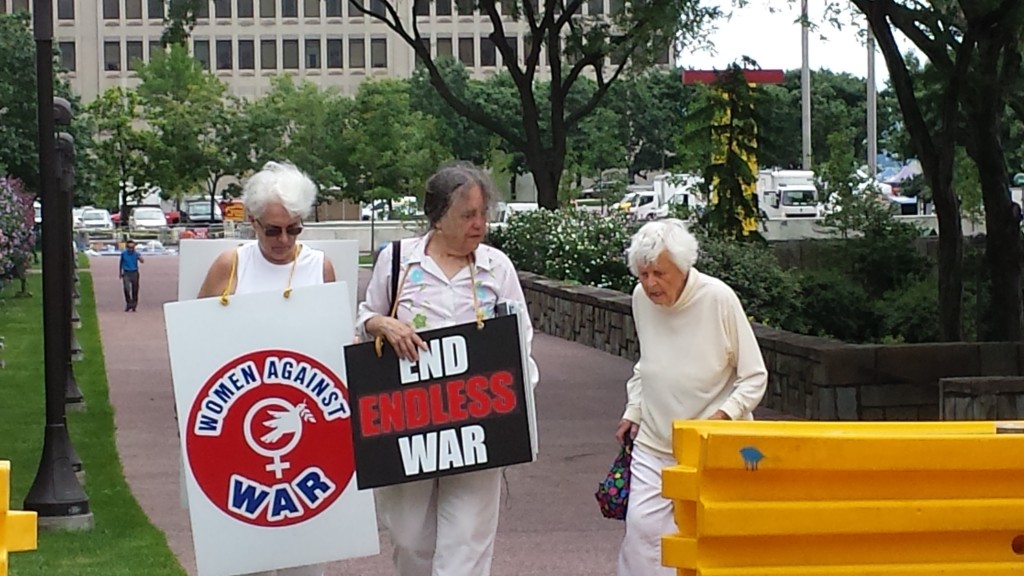 Walking back to our cars after the Iran Project Vigil, photo by Priscilla Fairbank

In the face of political threats, multiple, cruel, continuing wars, and uncertainties about future US military actions we can only continue to act in the interests of peace, human rights, nuclear weapons reduction, compassion for those on the ground, and analysis of who stands to gain – in power and profit – from continued war.