On a truly beautiful, sunny but somewhat windy day, at noon on Friday, June 6, 2014.  A handful of Grannies for Peace joined the Schenectady Neighbors for Peace weekly vigil as a part of our own “Roving anti-drone vigils” planned for this spring and summer.

Early part of the SNP and Grannies vigil on June 6, 2014, photo by Mabel Leon

We brought along our Grannies Against Drones T-shirts, the Grannies for Peace banner and some drone-metal gray paper drone hats [created by Kim Kennedy and folded by Kim and Mickie], based on a template supplied by peace and justice activist Kathy Kelly. 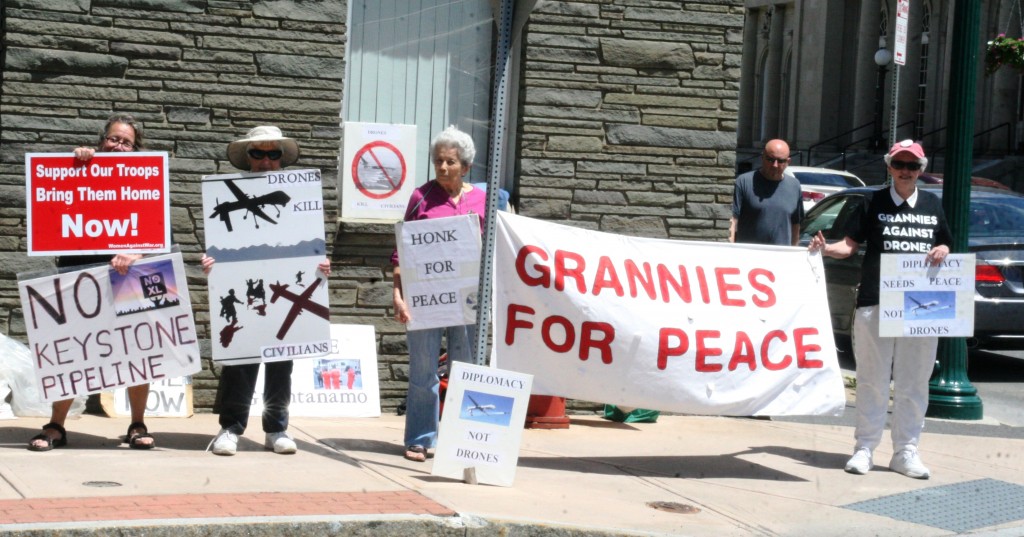 Variety of signs at our vigil. Photo by Mabel Leon

The vigil was lively and spirited,  even though there were only about a dozen of us present. Lots of catching up and sharing the latest news.  Mabel Leon snapping some photos and three vigilers moving to the shady side of the street so that we had people on both sides with our signs and other props.  In honor of the anti-drone theme most chose signs with that message, especially “Diplomacy Not Drones” but there were also signs about closing Guantanamo and ending war and torture. 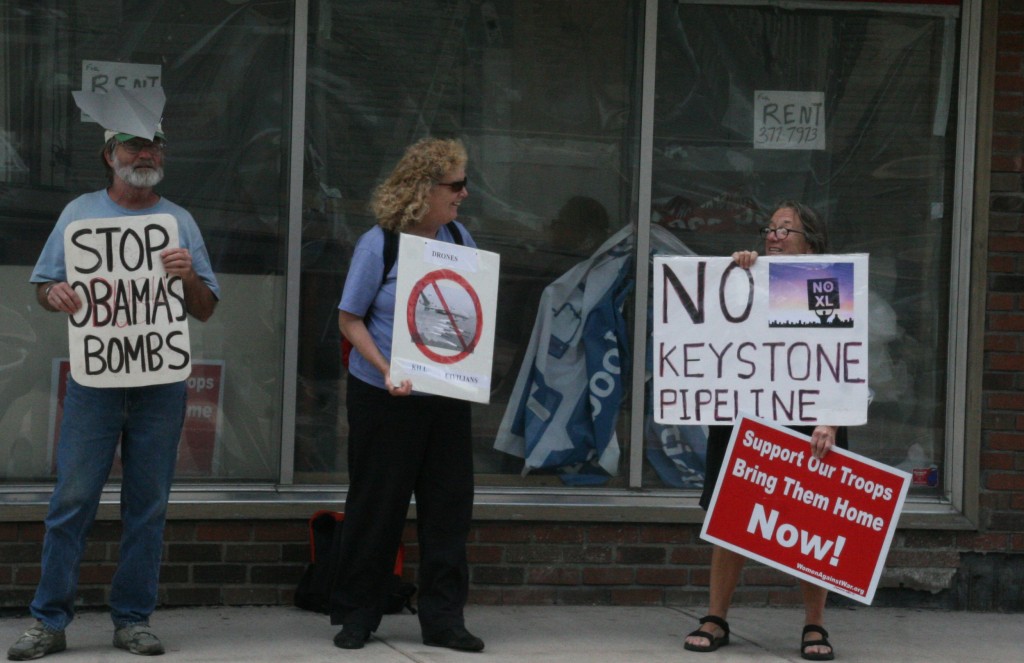 On the shady side of Liberty Street. Photo by Mabel Leon

SNP provided the signs, which Mabel brought to the vigil on the corner of Liberty and Jay streets.  It was a lovely vigil with a combination of updates and comments about current peace and justice issues and political developments and waving of signs and making eye contact with drivers and pedestrians.  6 of our 10 drone hats were worn during the vigil and the combination of signs, banner, shirts and drone hats caught the attention of those passing by. 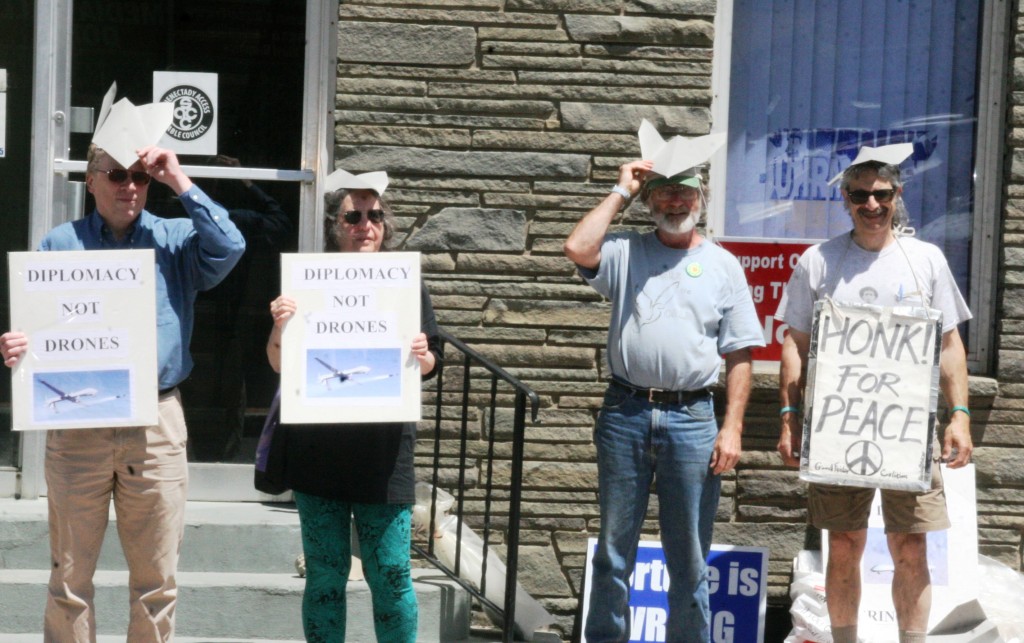 Drone hats on a windy day! Photo by Mabel Leon

A new wrinkle was discovered in the wearing of the drone hats on a windy day.  Peter, Mark, Michael and Greg were all wearing hats with bills and they wore the drone hats over those baseball style caps.  This provided stability and also looked really cool. 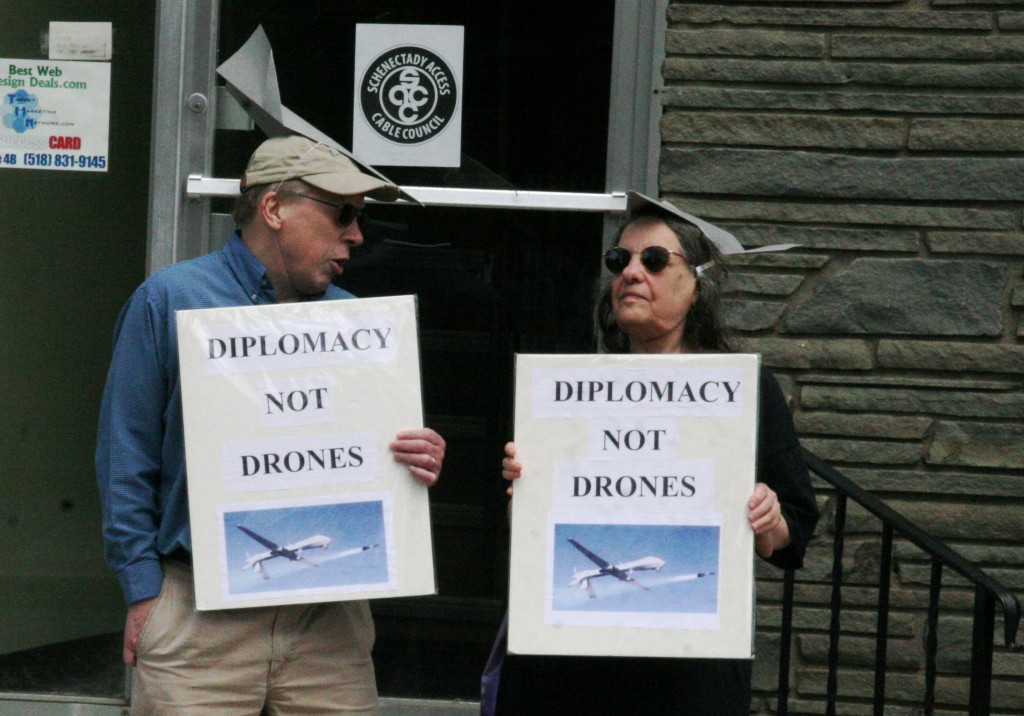 Some of the SNP members like Mabel and Bertha were also Grannies for Peace and figuratively wore more than one hat.   Purely representing the Grannies  were Maud, Pat Beetle and Mickie.  Joining us as SNP regular vigilers were Teri, Jackie, Peter, Mark, Michael and Greg. 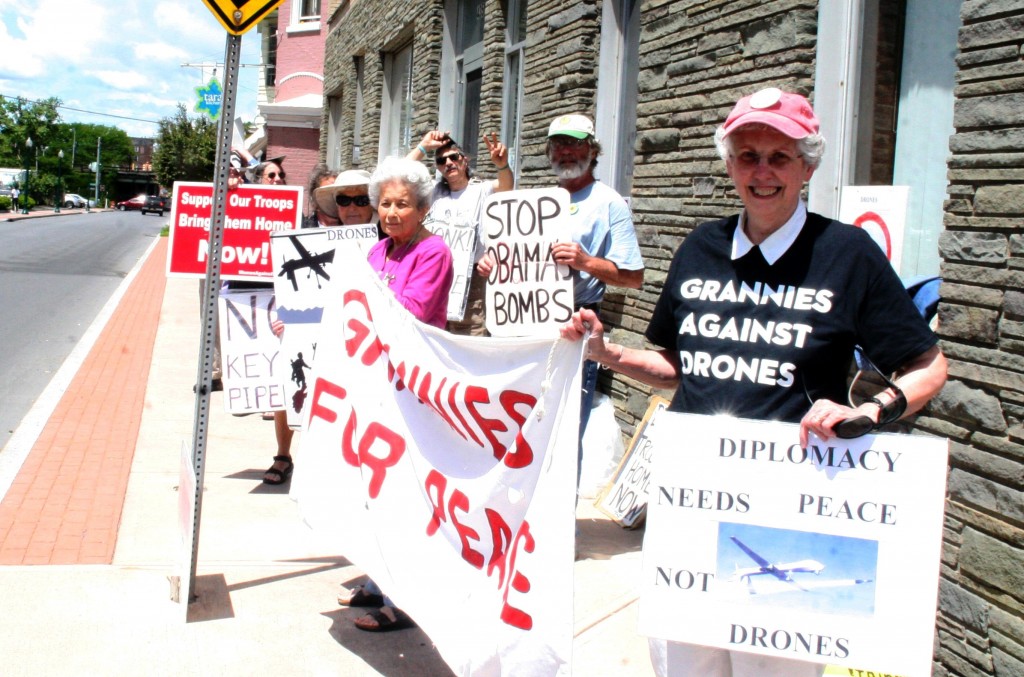 I found out in the course of the vigil that the Schenectady vigil was one of the oldest continuous vigils in the Capital District having started right after the September 11, 2001 attacks.  It certainly was amazing and enthusiastic. They clearly had their regular drivers and passersby who greeted them and engaged in dialogue.  Another thing about the vigil was that it didn’t end at 1 PM sharp but people lingered until about 1:15 PM finishing up conversations and updates. 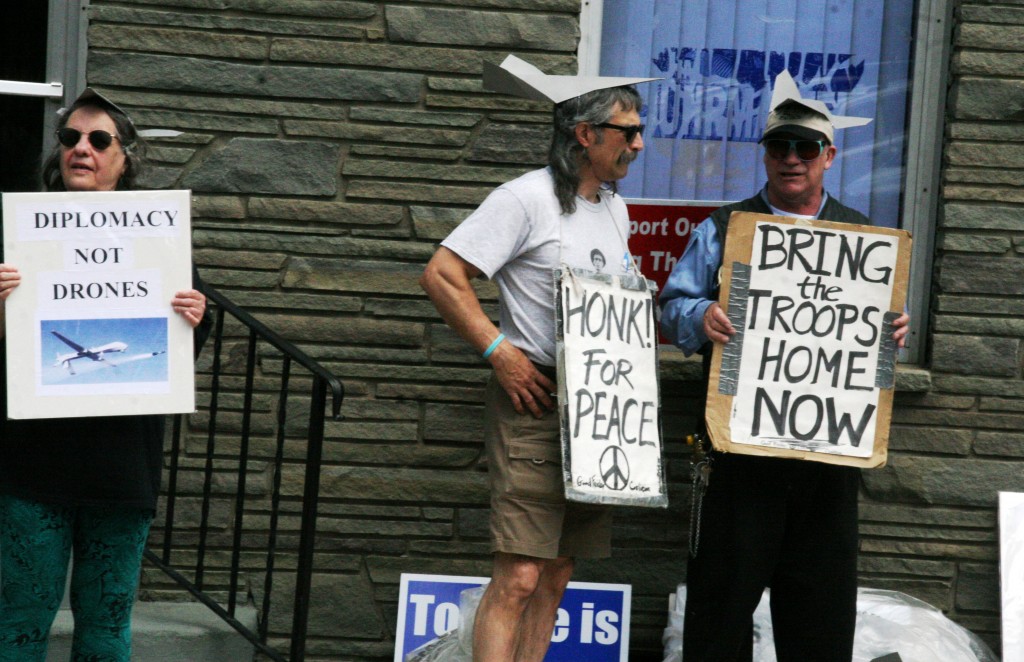 Multiple messages for Peace while catching up on news. Photo by Mabel Leon

If this first roving anti-drone vigil was any indication — then the Grannies will find their inspiration and enthusiasm enriched by attending the other two vigils that we have planned with Bethlehem Neighbors for Peace and Saratoga Neighbors for Peace. 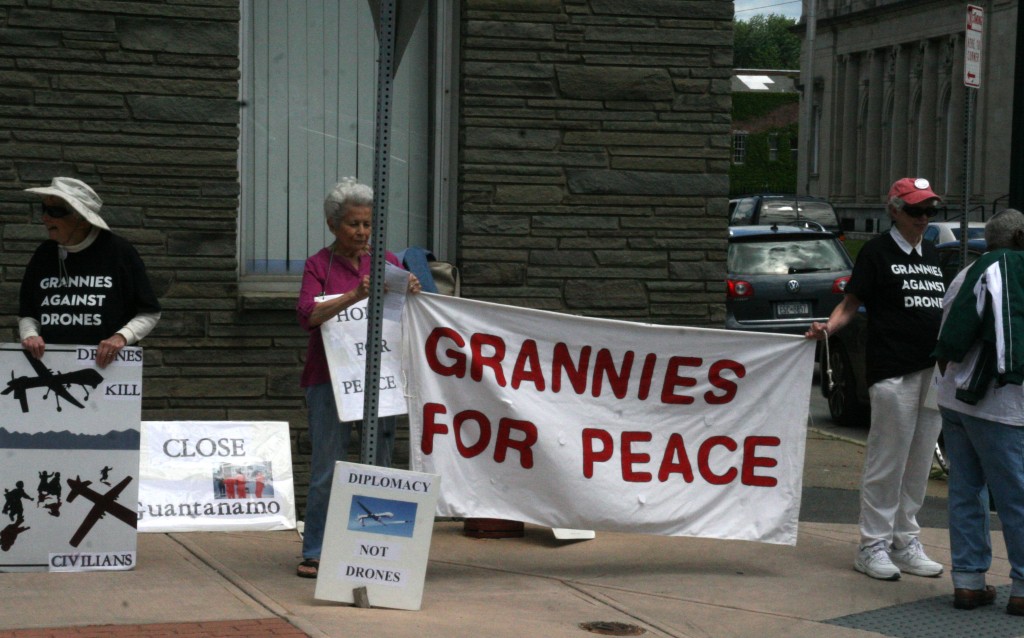 Jay Street end of the vigil. Photo by Mabel Leon