On the afternoon of Saturday, May 10, 2014 several Grannies for Peace gathered at noon 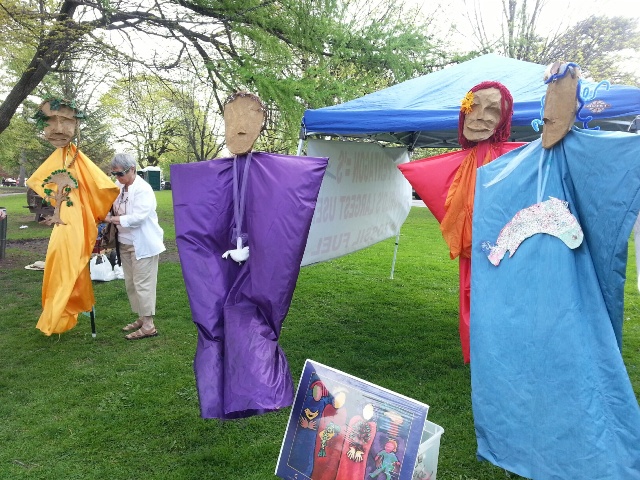 to set up for what would be our eighth annual Mother’s Day vigil in the park, at the Albany Tulip Fest. The actual vigil ran from 1 PM to 2 PM. 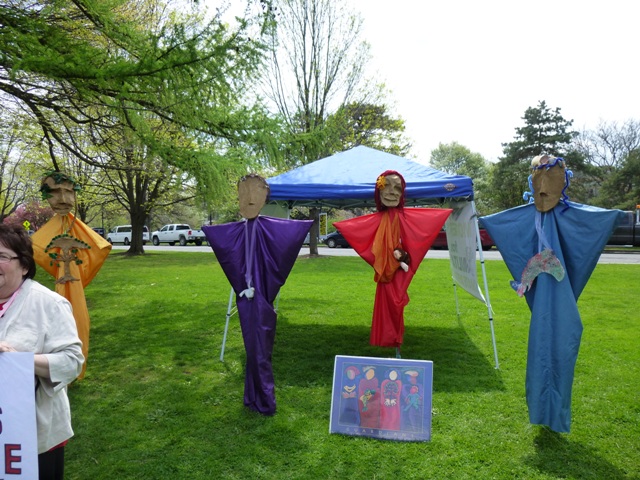 Four Guardian puppets with Ann Altman Poster and Dahlia in the foreground, photo by Marcia Hopple 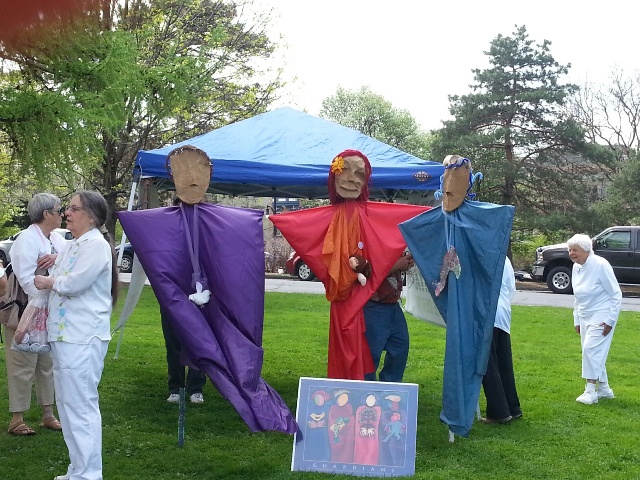 setting up for the vigil that ran from 1 PM to 2 PM in Washington Park, photo by Nancy Smith

The theme of our vigil this year was about the way that war causes climate change with the huge US military carbon footprint exceeding that of all other countries.

But we had some helpers besides the 18 dedicated Grannies and their allies.  These were the beautiful Guardian puppets created by Mabel Leon.  The one robed in purple and holding a dove is the Architect of Peace.  The blue gowned puppet, holding a fish is the Guardian of Water.  The puppet holding the Tree of Life and wearing a golden covering is the Guardian of Earth.  The red-haired puppet, dressed in red is the Nurturer of all Children.  They stood with us to remind everyone that we only have one planet and that we need to protect it and all of the living beings who share its resources and sanctuary. 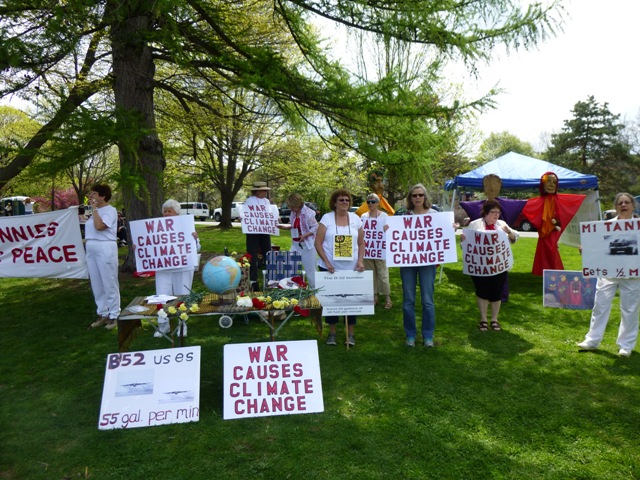 Some of our signs and banners towards the start of the vigil, photo by Marcia Hopple 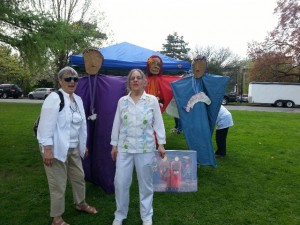 Barb and Mickie with three of the puppets during the setting up period, photo by Nancy Smith 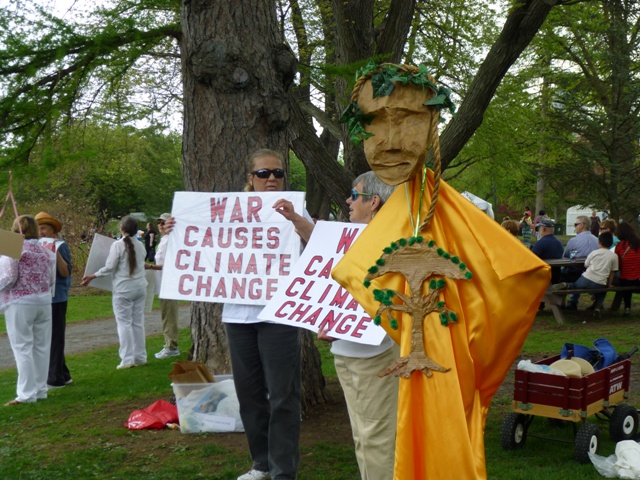 Guardian of Mother Earth with Kim and Barb Cooley, photo by Marcia Hopple 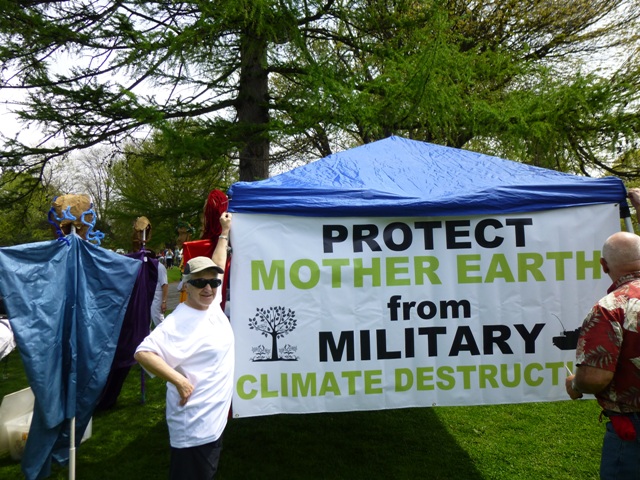 Doreen and Harry helping Kim hang a banner from the canopy with puppets from behind, photo by Marcia Hopple 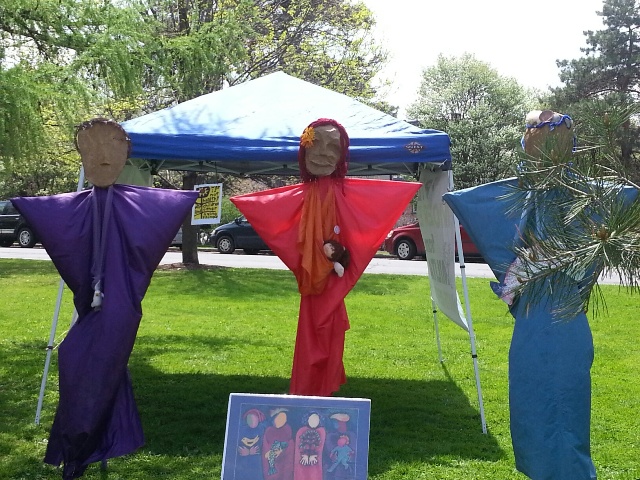 Architect of Peace, Nurturer of all children and Guardian of watter settling in with the canopy and pine tree, photo by Nancy Smith 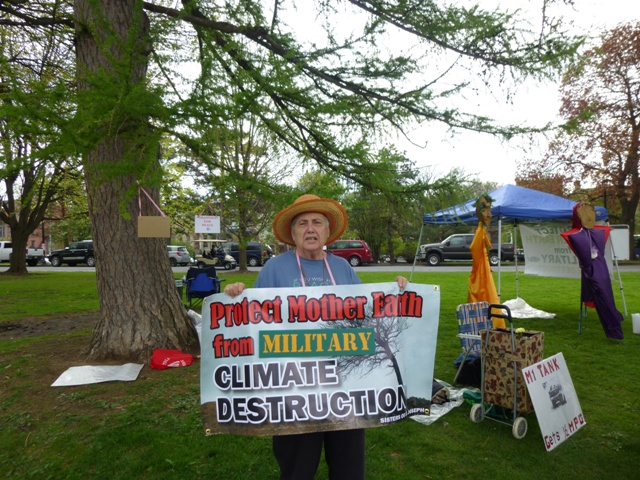 Fran with her sign at the close of the vigil, photo by Marcia Hopple

Marcia Hopple and Barb Cooley had gone to Mabel’s home for a special training session to learn how to assemble, disassemble and transport the puppets who would stand at the vigil and then move to FUUSA that afternoon for a Sunday Mother’s Day service, also presented by the Grannies for Peace to the Unitarian Congregation.  But that’s another story.  Dot and Doreen were the co-chairs of this particular event and they also arrived early with the printed leaflets, beautiful red and yellow carnations, a globe and a beautiful covering for the table that Marcia supplied.  We had some powerful allies in Joan’s husband, Harry (a great canopy setter-upper) and Nancy’s husband, Ted, and father.  Kim brought the beautiful sky blue canopy and we completed the display with Grannies for Peace neck signs, buttons and our cloth banner, made by Kim along with the War Causes Climate Change posters.

In addition to our assembled Grannies and allies two of Dot’s children stopped by, along with other activists and friends of other vigilers.  The puppets drew many interested spectators, many of whom took pictures.  Lots of younger people stopped by to find out why we were vigiling and Pat, Dot and Doreen talked with them and handed out many leaflets and carnations as a simultaneous part of the vigil rather than making it a separate stroll through the Park as we’ve done in previous years. 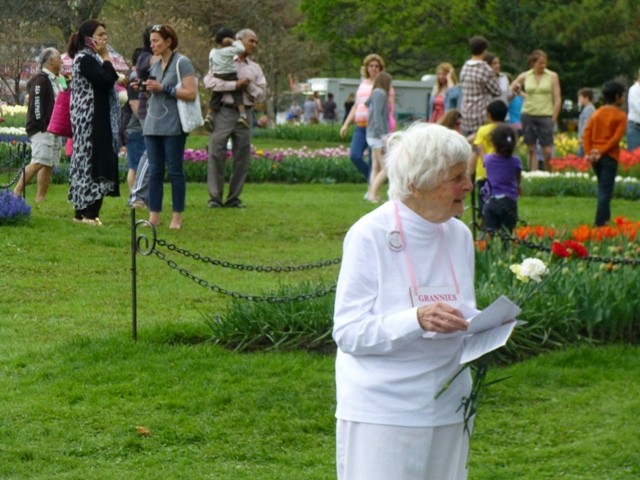 We stood with signs, banners and puppets from 1 PM to 2 PM and were able to escape the rain that threatened, except for one brief “off with their heads” moment when we felt some sprinkles and removed the Guardians’ papier mache heads and placed them under the canopy.  Then we ended the vigil with a closing song, “The Earth is Our Mother” and got a lot of help carrying the props and disassembled puppets and canopy to a pick up point where the intrepid Barb and Mickie the helper loaded them into Maud’s car for the trip to FUUSA. 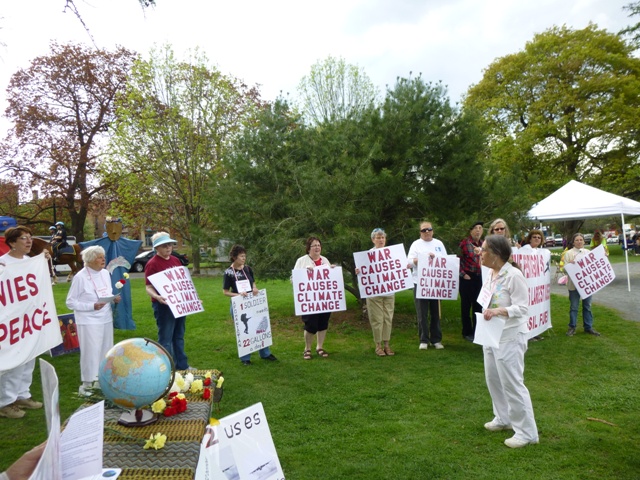 Closing circle for the vigil, singing ‘The Earth is our Mother”, photo by Marcia Hopple

It was a very successful and fun vigil in the midst of the beauties of lush arrangements of tulips and other flowers and the joyful presence of people and pets. 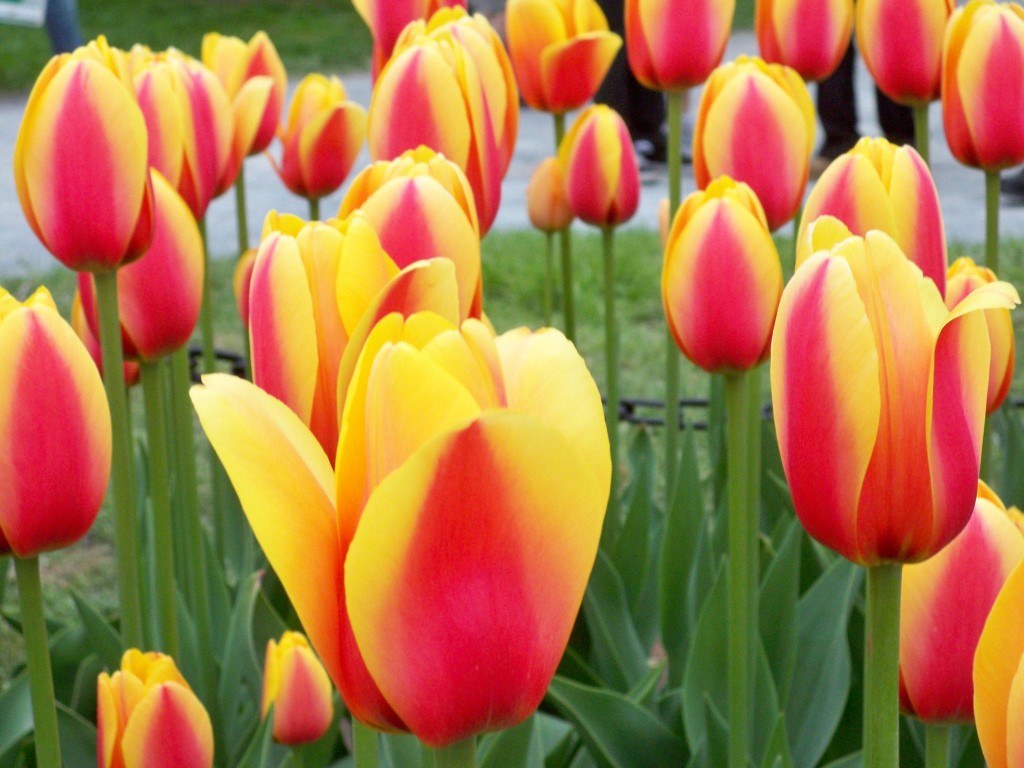 Close up of red and yellow tulips, photo by Deborah Cole