As the first public event in a conversation about some of the roots of violence in our society, namely War Toys and Violent Videos, the Grannies For Peace held a vigil and mall stroll at Colonie Shopping Center during one of the Saturdays of holiday shopping madness. 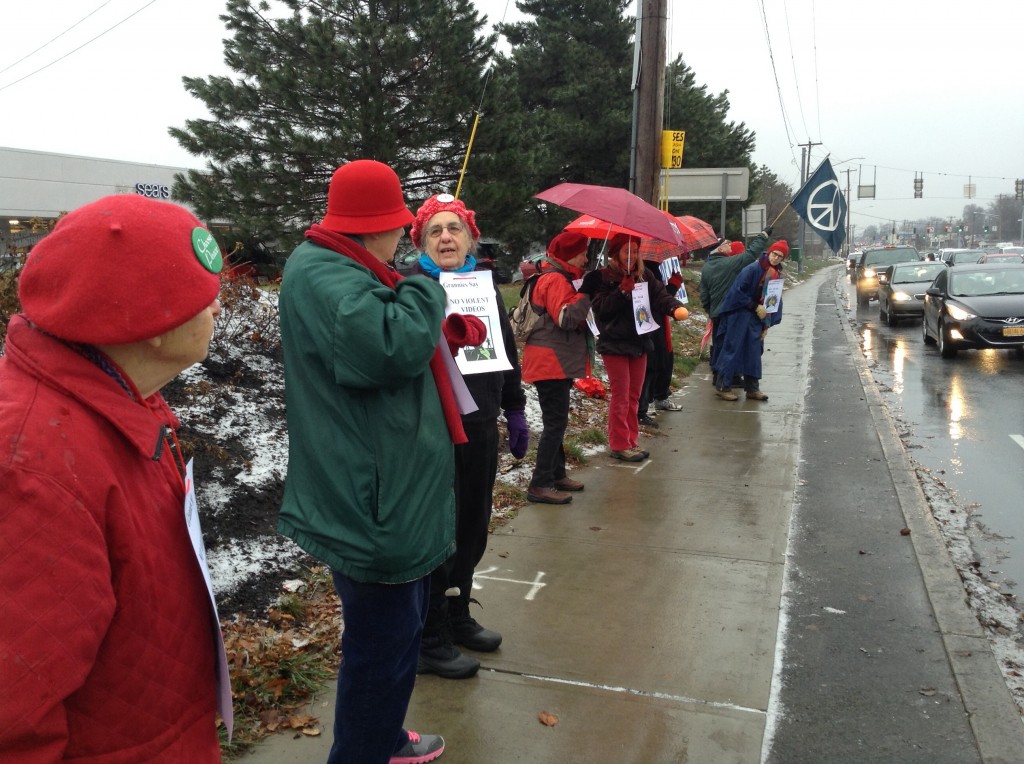 More of the vigil with Marcia leaning forward, photo by Terri Roben

This event was added to the Grannies usual yearly events and was co-planned and coordinated by Maureen Aumand and Nancy Koltko.  It’s part of a continuing process to hold a community education forum or series of speakers on the subject during the spring of 2015. The most visual part of our message came from the two posters designed by Mabel Leon and implemented by Terri Roben and Jackie Donegan after Mabel was unable to be at the vigil. 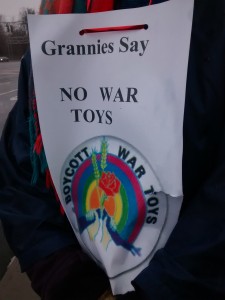 One of Mabel Leon’s wonderful posters in the rain, photo by Mark Klein 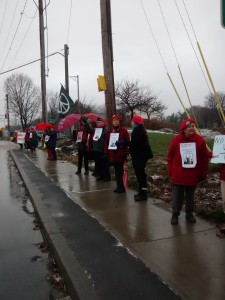 The wolf road end of the vigil in the rain, photo by Mark Klein

It was a cold and  rainy day but we had 18 intrepid vigilers who included Grannies and other community peace and justice allies. Bolstered by a 19th person (Harry) who was present as an auxiliary member of the vigil and mall stroll.

We were lucky that the heavy rain of earlier in the morning had dwindled to a slight drizzle for most of our time on the sidewalk. Our vigil was greeted by friendly waves and honks from drivers and passengers driving by on Central Avenue and there was no overt hostility to our message. 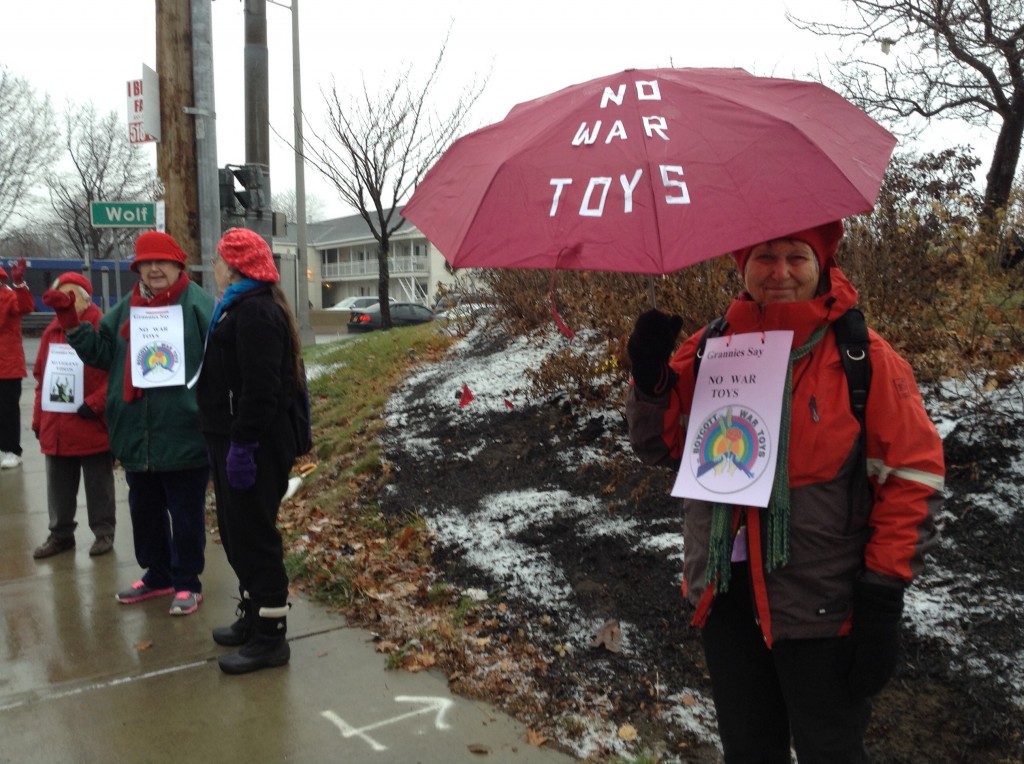 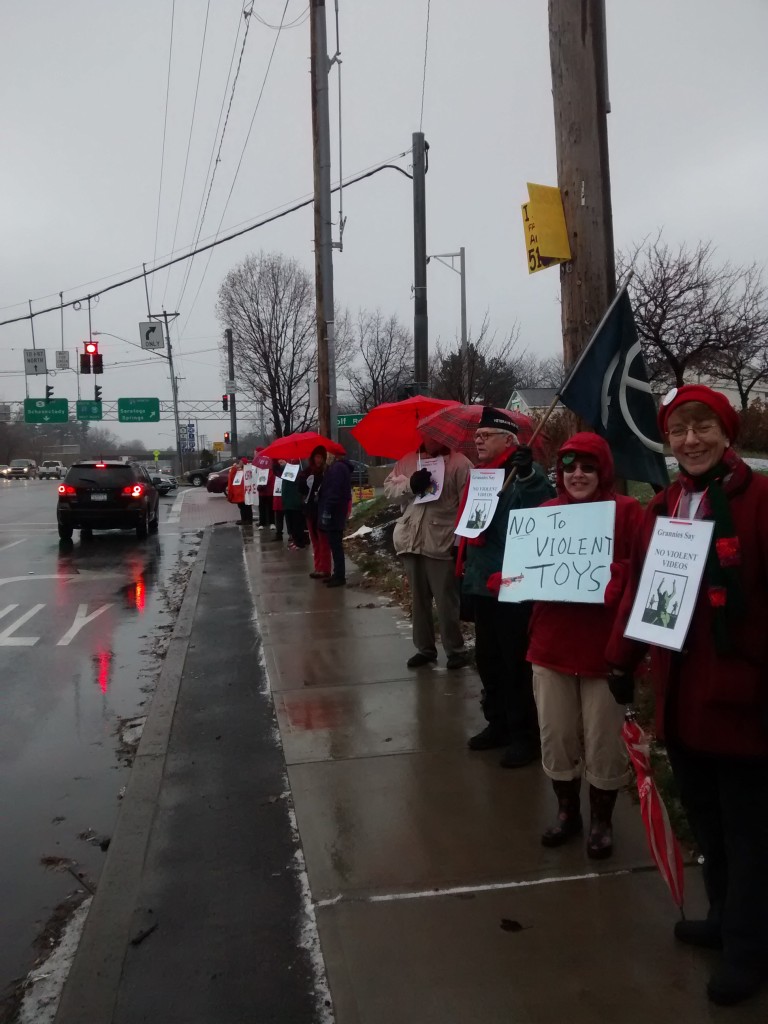 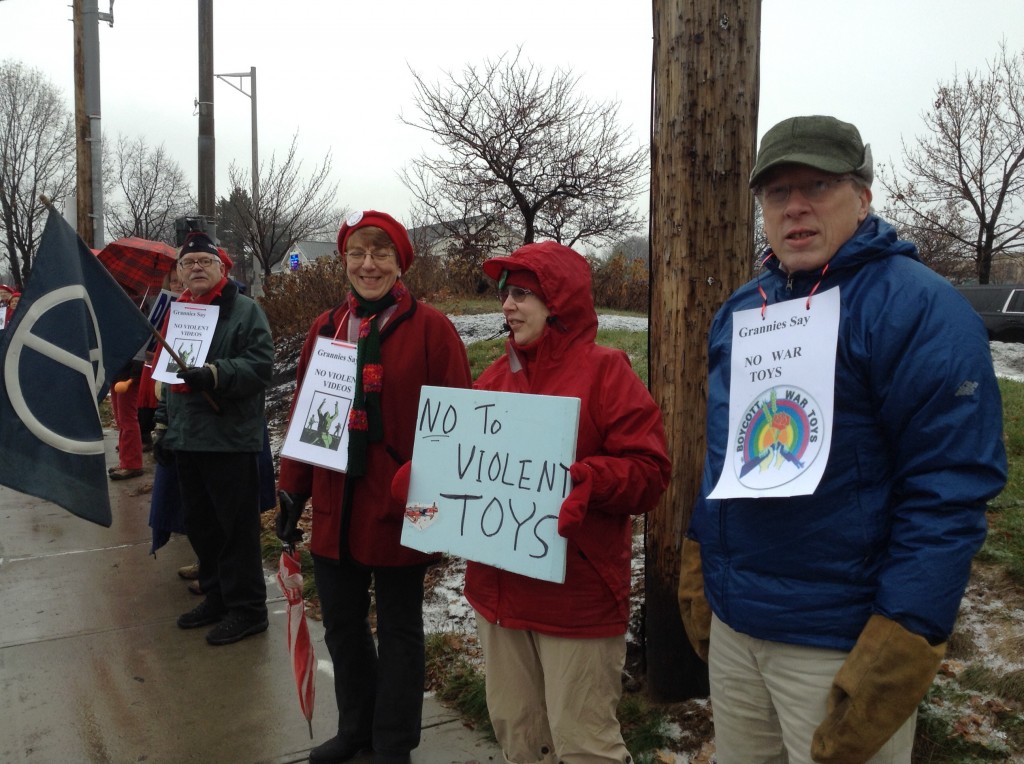 One end of the no war toys vigil with Mark Klein and Elaine Klein at the end, photo by Terri Roben 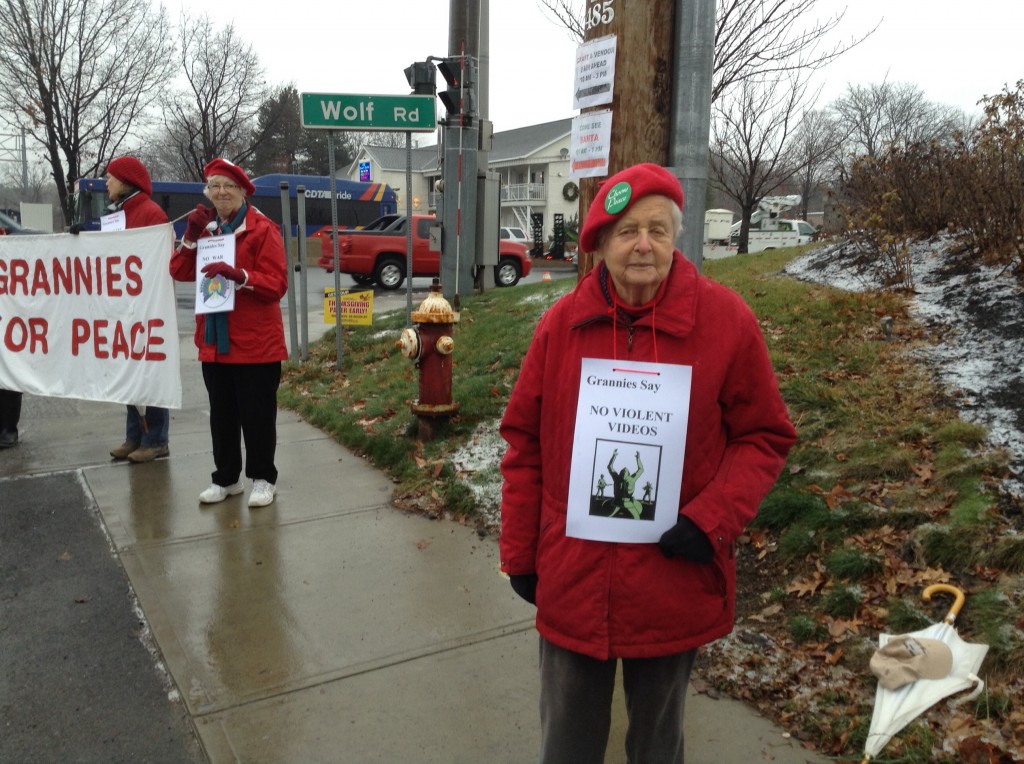 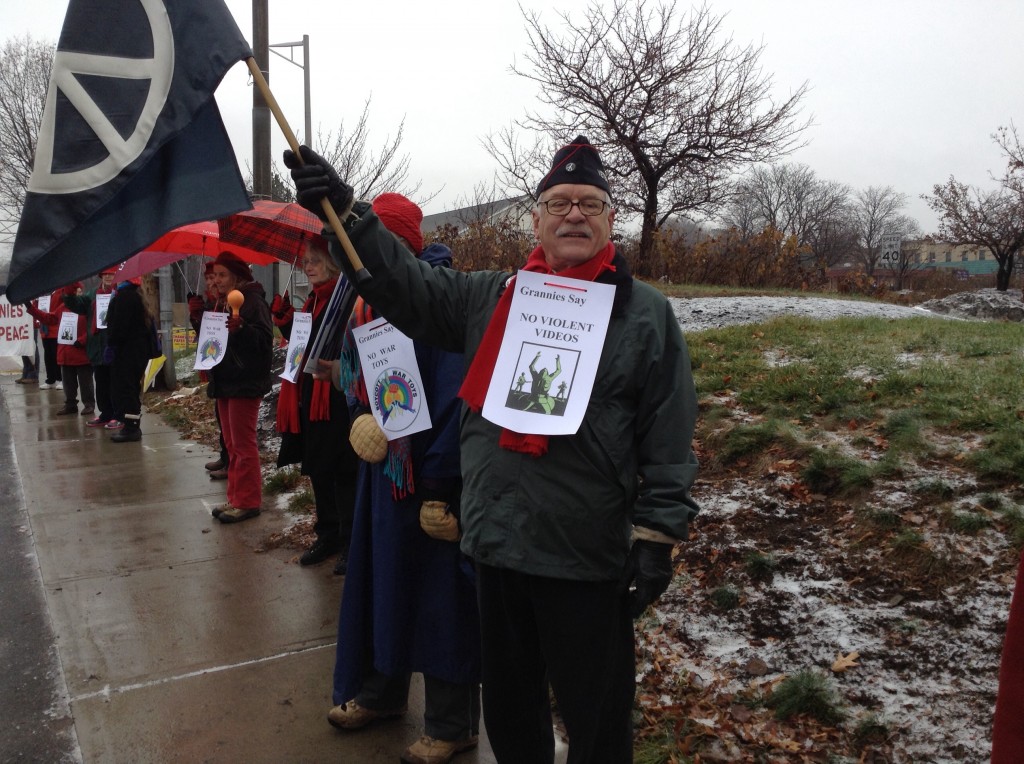 More of the vigil line, photo by Terri Roben 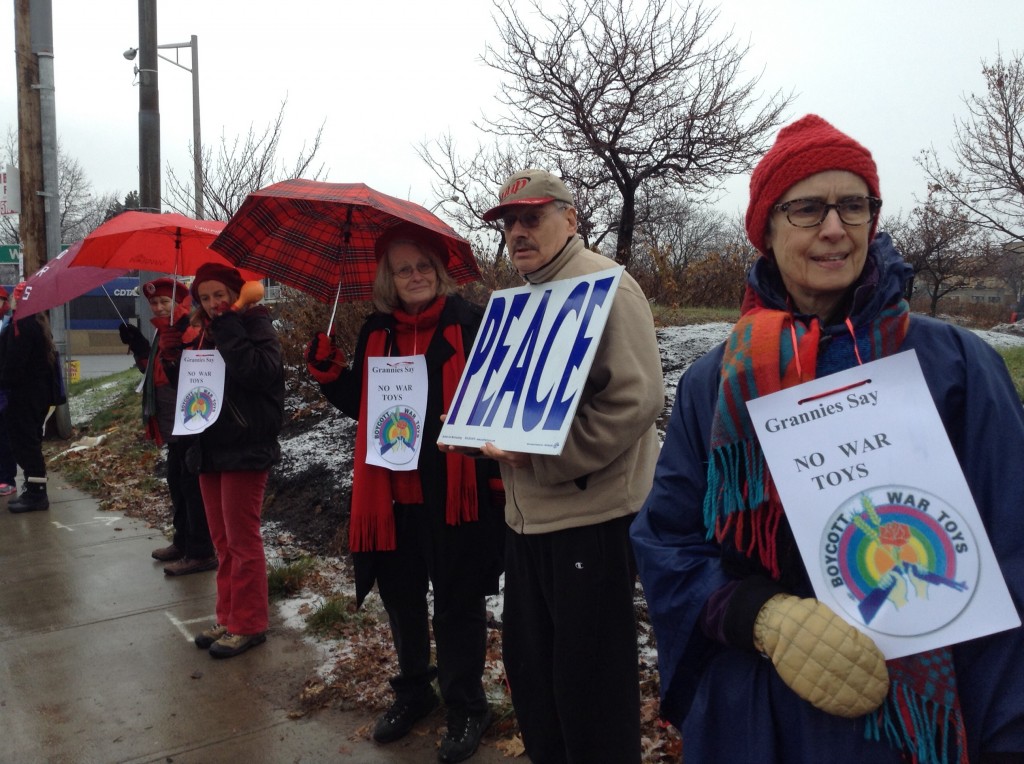 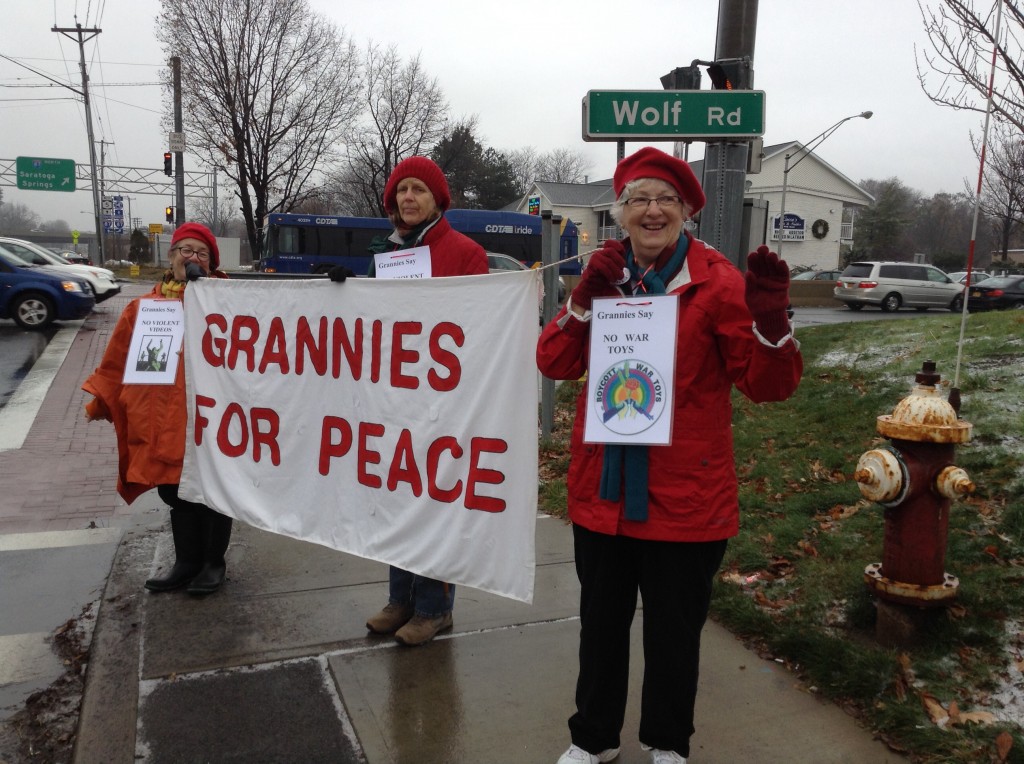 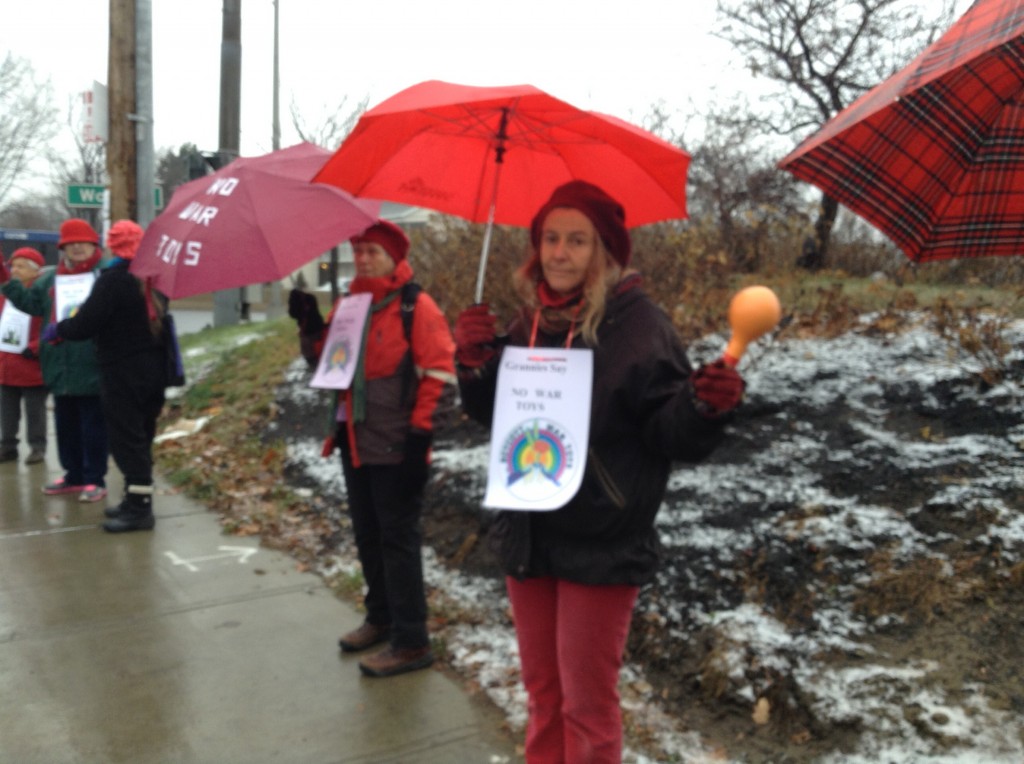 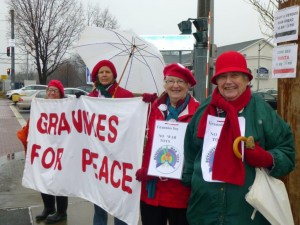 Wolf Road end of the vigil, photo by Marcia Hopple 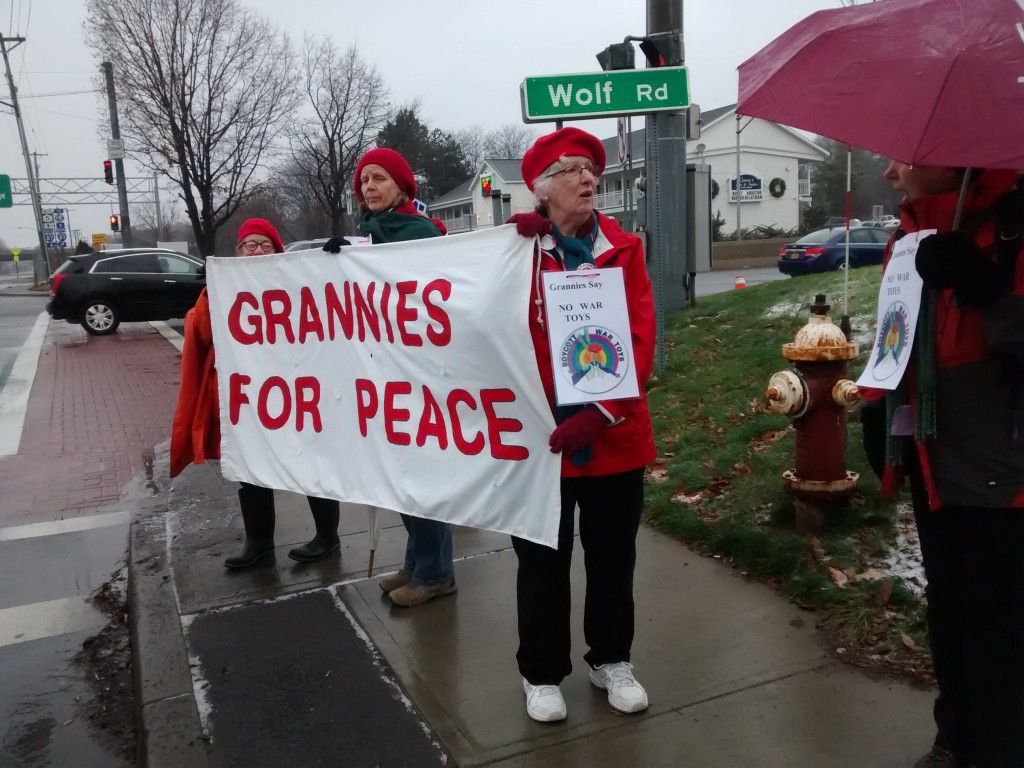 Grannies for peace banner (Kim there in spirit) with Jackie, Janet and Dot, photo by Mark Klein 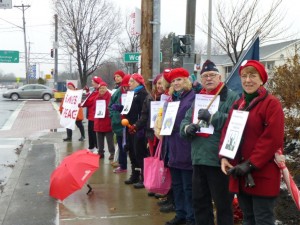 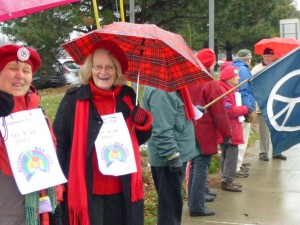 Maureen and Barb on vigil line. Photo by Marcia Hopple 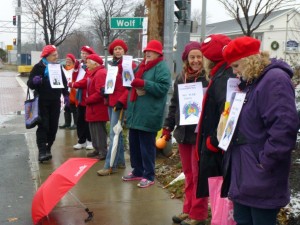 Jackie Donegan at the Wolf Road end and Terri Roben at the other. The two rescuers and implementers of Mabel’s anti war toys              signs, photo by Marcia Hopple 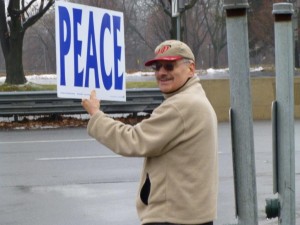 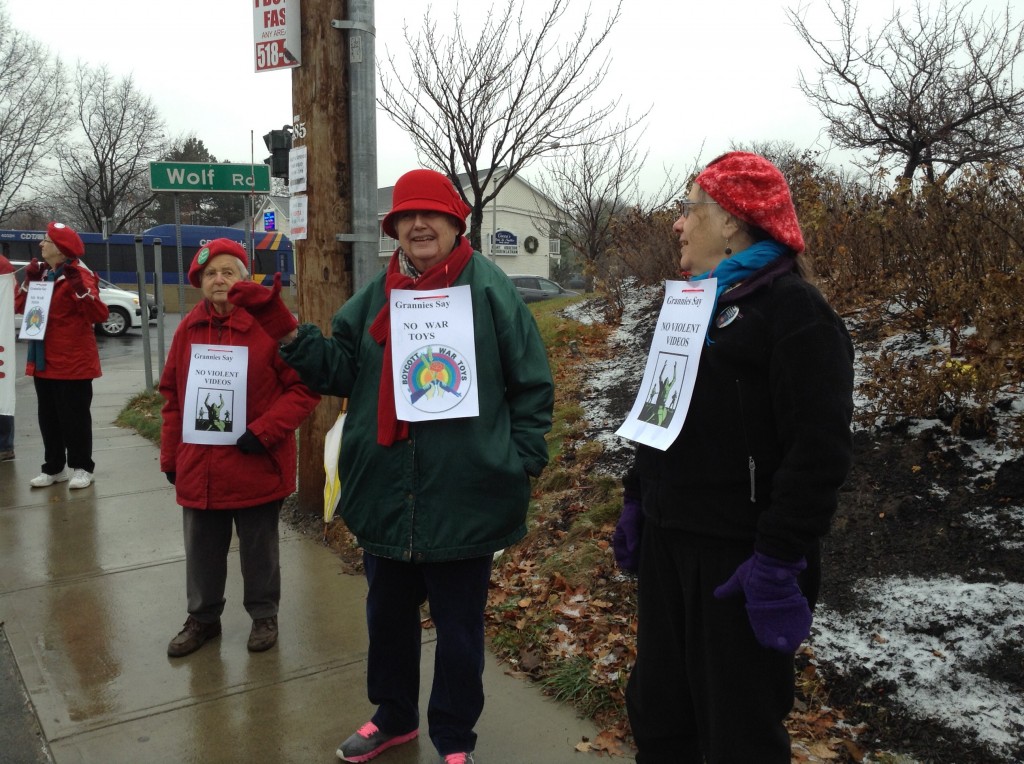 One of the things that we did while vigiling, besides waving at passengers of vehicles traveling by in great numbers was to sing some peace songs.  Chrys had brought a waterproof rattle and we had several good and enthusiastic singers in our numbers.  We sang Peace,  Salaam, Shalom, Let the Peace Begin, When we Teach Peace Instead of War, War Makes War.  It kept us warm and got us in good voice and spirit for the Mall Stroll that was going to begin at 1 PM. 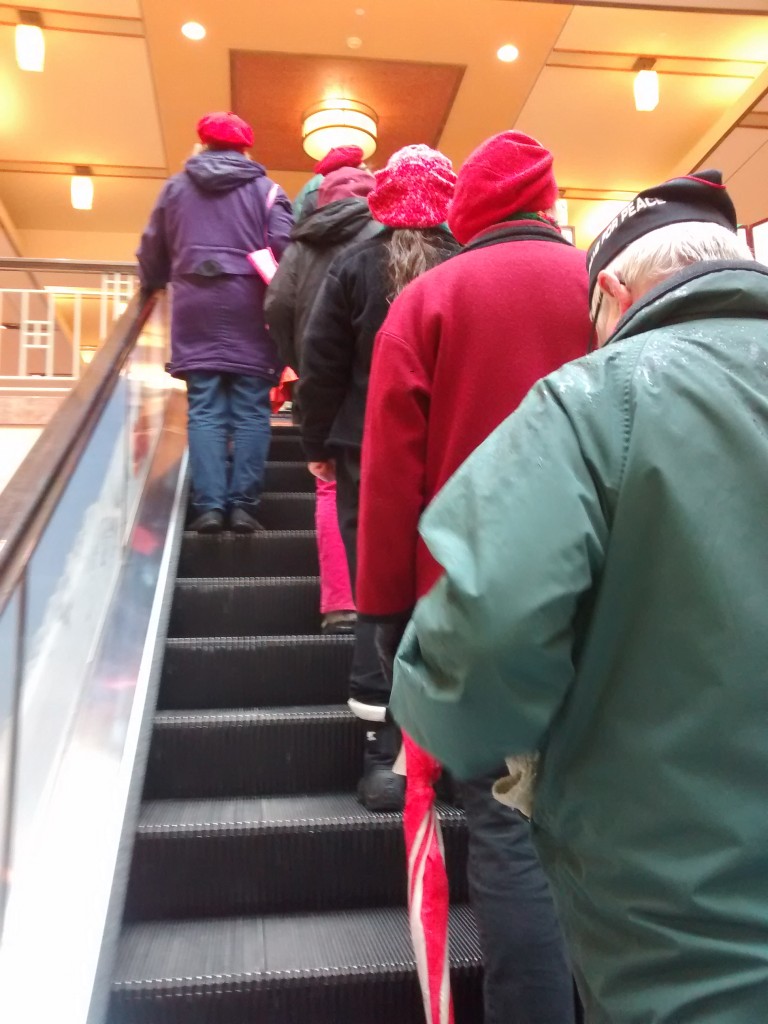 Riding up to the second floor with our signs, Dan Wilcox in the green jacket, photo by Mark Klein

A few minutes before 1 PM we walked to the Cinema entrance of the Colonie Shopping Center where we took the escalator up to the second floor and began to process towards the back of the mall, singing Peace Salaam, Shalom as we went and wearing our neck signs, but not carrying any other banners or signs.  We got a friendly reception from shoppers and craft vendors and were feeling pretty good.  But as we walked we saw a young security guard come over and check us out.  Then we were joined by another guard who told us that we couldn’t bring signs into the mall and we would need to leave. 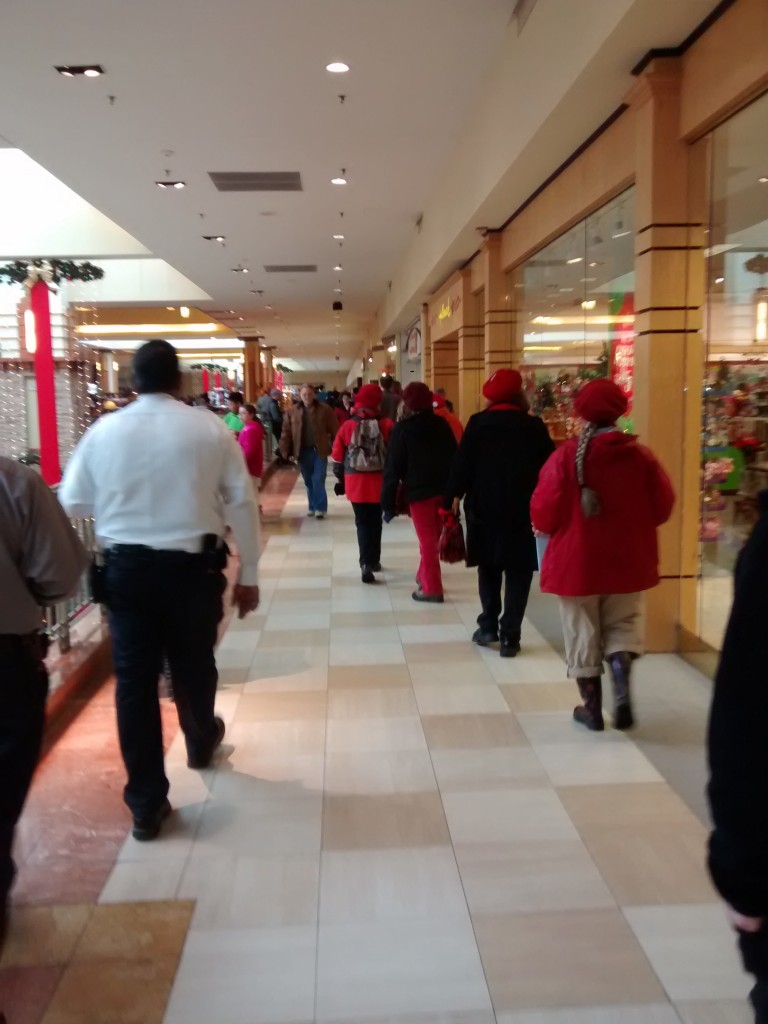 Strolling through the mall, photo by Mark Klein

This all took some time and we continued to walk slowly around the second floor, where some very cute Bethlehem elementary school students spoke to us about their gift wrapping fund raiser and Terri actually contributed to their fund drive.  As we walked, we kept singing until we got to the escalators again where we headed downstairs. 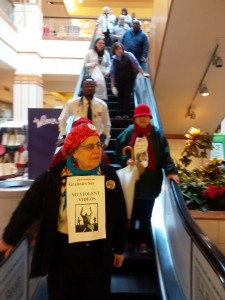 Going Down! photo by Mark Klein

The guard behind us was very nice and somewhat apologetic.  We gathered near the front door to remove our signs and give them to Terri before we dispersed.  One woman passing by us said “God bless you!” as she went by. Maureen reached out to the Mall security guards and thanked them for accompanying us before we got ready to depart.

Two Colonie police officers joined us near the exit. Once they saw that we were leaving they joked around with us about the photos on Mark’s phone and were pleasant as they waited to see us all leave.

All in all it was a successful vigil.  We learned some lessons for future mall events if we choose to visit again.

**** Note about the photos: I made some of them larger, especially Terri’s, because for some reason, even though I edited them before posting them, when you click on them they rotate and are upside down. You can click on Marcia’s and Mark’s to view them at full size if you want to.