Women Against War Reminds Us to Exercise Our Rights

[This is an article written by Marcia Hopple, who organized and supported the “exercising our rights” demonstration through planning with participants, buying some of the workout outfits, supporting the whole event and reception at the Sanctuary for Independent media and much more. 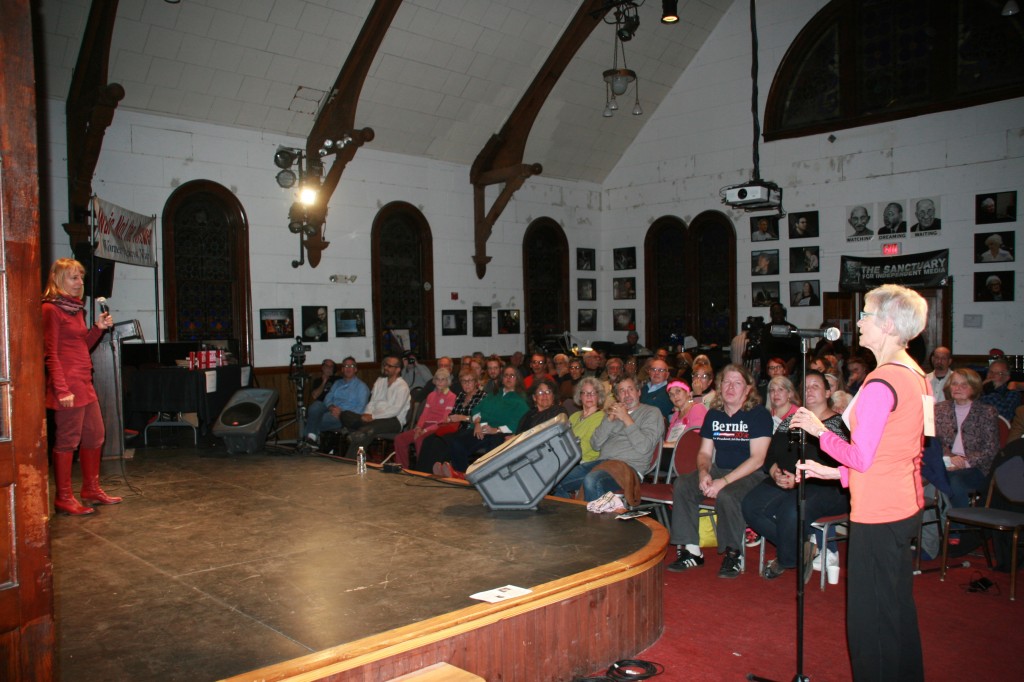 Marcia introducing Medea at the Sanctuary. Photo by Mark Klein

She was ably co-assisted by Mabel Leon, who designed the headbands, signs, and other props and chose the chants.  Kudos to the other participants who chose their messages, completed their workout fashions and created theatre.] 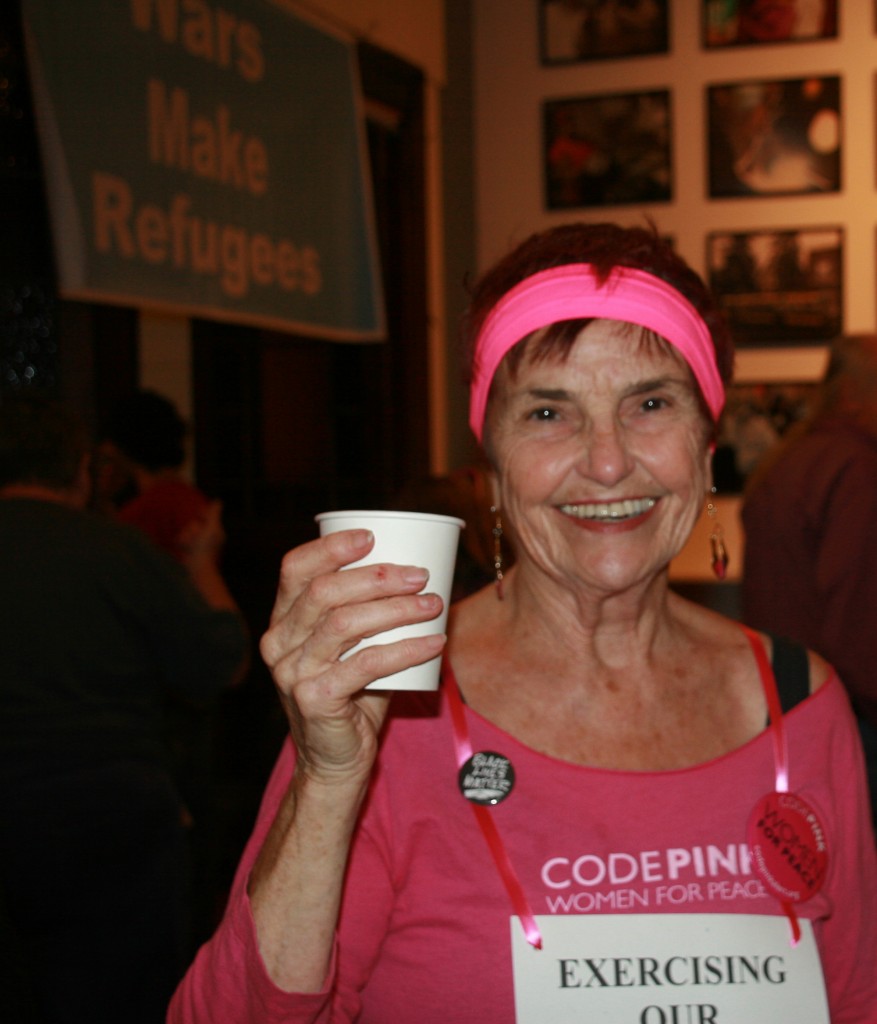 Women Against War members stood out in the crowd at a recent event with Medea Benjamin of CodePink, to welcome her and to show solidarity with her. 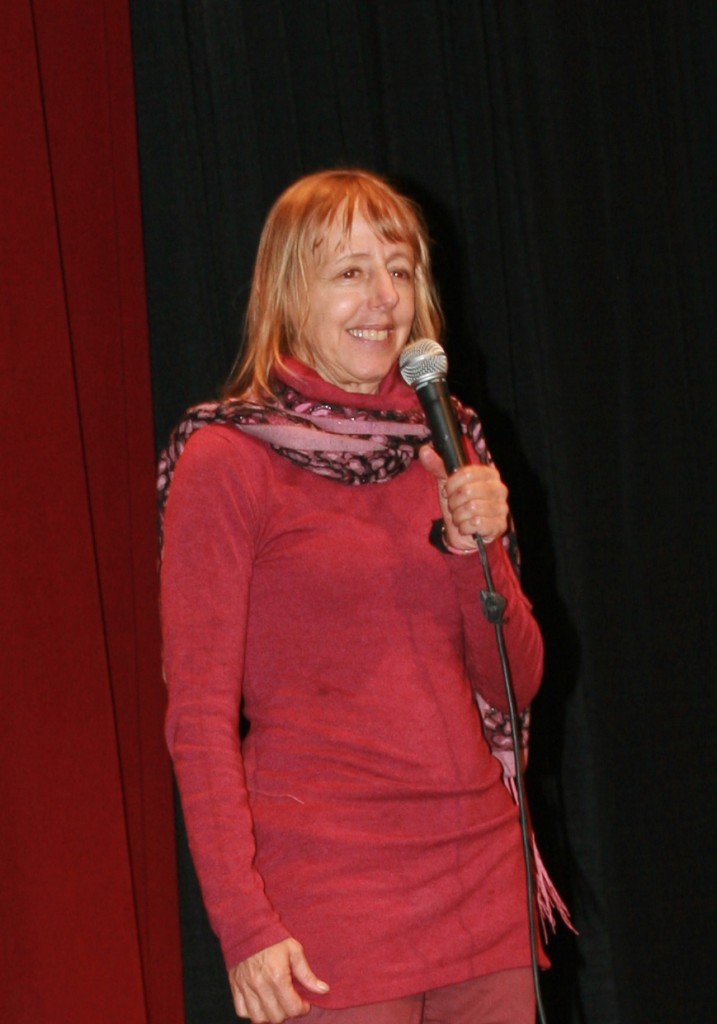 Medea speaking at the Sanctuary. Photo by Mark Klein

WAW is a local affiliate of the Washington DC women’s peace organization that she co-founded.

Eight members of WAW dressed in fitness clothes and wore pink sweatbands to make the point that we all need to exercise our right to vote, to boycott, to assemble, and to choose diplomacy over war, among many other rights.

Medea spoke about her latest book, and about the results of the presidential election, at the Sanctuary for Independent Media in Troy.  WAW has cosponsored a number of speakers and events at the Sanctuary over the decade-plus since it and WAW were started.

Medea and other CODEPINK activists are known for their ability to make media spectacles in settings from presidential press conferences to Israeli settlements, challenging hypocrisy and silence.  Medea’s books and lectures question the legality and morality of US policies such as arms sales, torture, and drone warfare with its collateral civilian casualties.  Her latest book is Kingdom of the Unjust: Behind the U.S.–Saudi Connection. 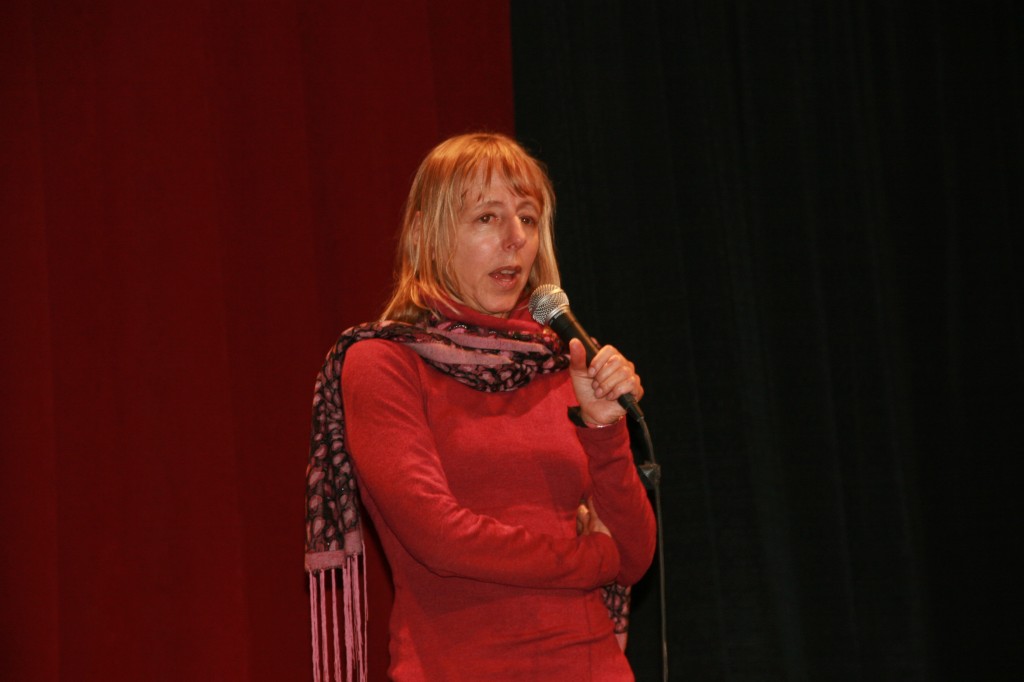 Medea speaking at the Sanctuary, photo by Mark Klein

Medea has won many peace awards and has traveled the globe working nonstop for peace.  She is co-founder of the human rights group Global Exchange, and a former economist and nutritionist with the United Nations and World Health Organization. 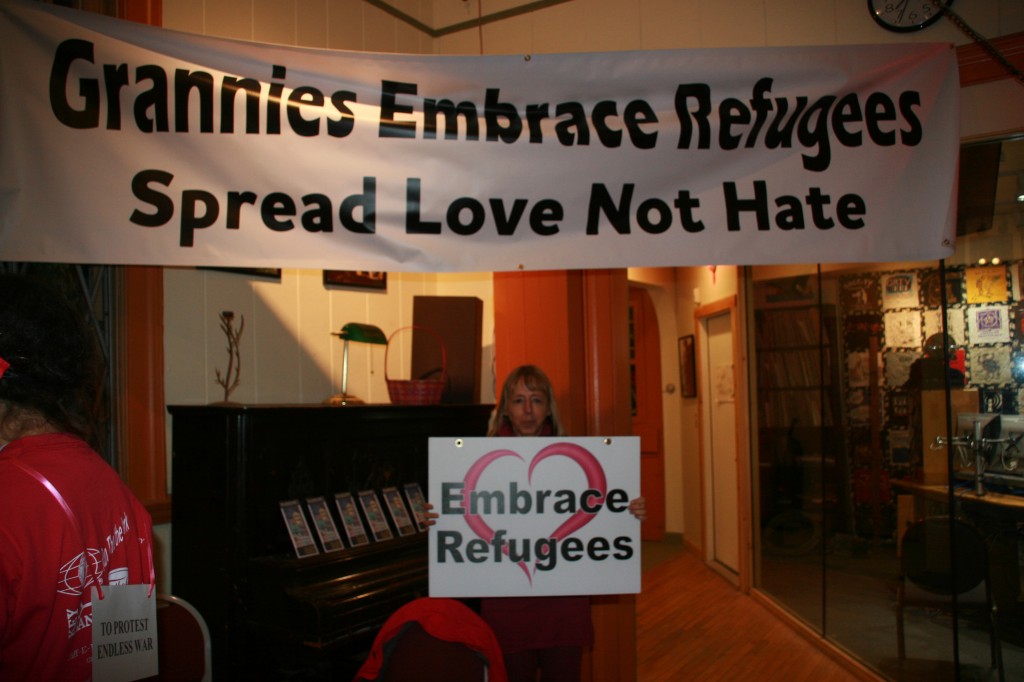 When she was introduced by the Sanctuary, the WAW greeting party was on stage to chant “We are Women Against War, We are CodePink, and We are Exercising our Rights.”   Each woman called out a right that is dear to us and then the group finished with “We Welcome Medea”.

Medea and many others, during the question and answer session after her talk, were deeply concerned about the election of Donald Trump as US President after his bigoted campaign rhetoric and ridiculous lack of qualification to lead and represent the country.  The event helped to rally us to action to keep him accountable and continue our constant efforts to convince Congress to seek peace in the world.

As CodePink said immediately after the election, “We Rise in Love.”  Women Against War’s banners hanging at the event also called for love and healing, through embracing refugees, ending racism, and choosing diplomacy. 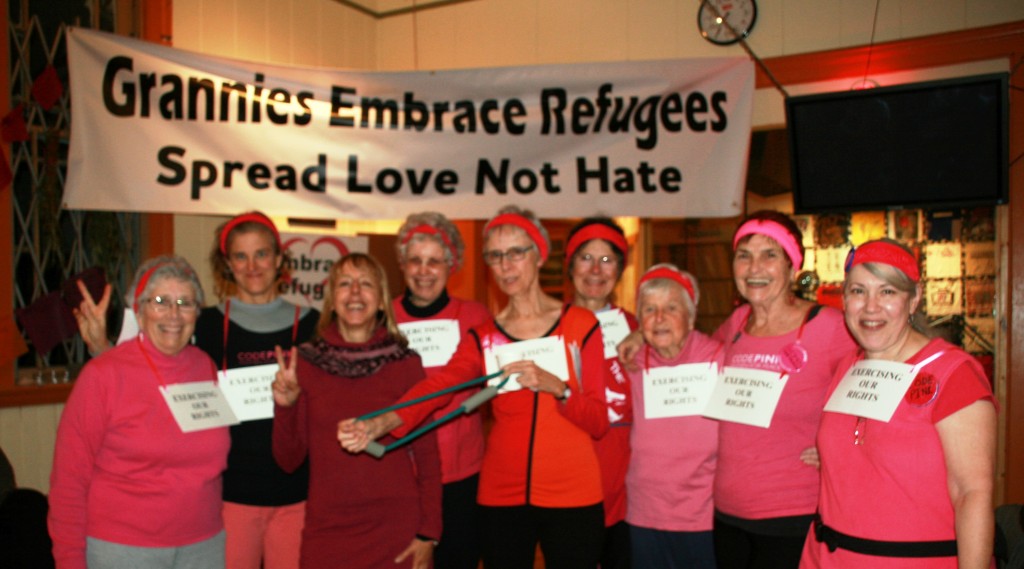 Medea and the exercise crew at the Sanctuary, Photo by Mark Klein 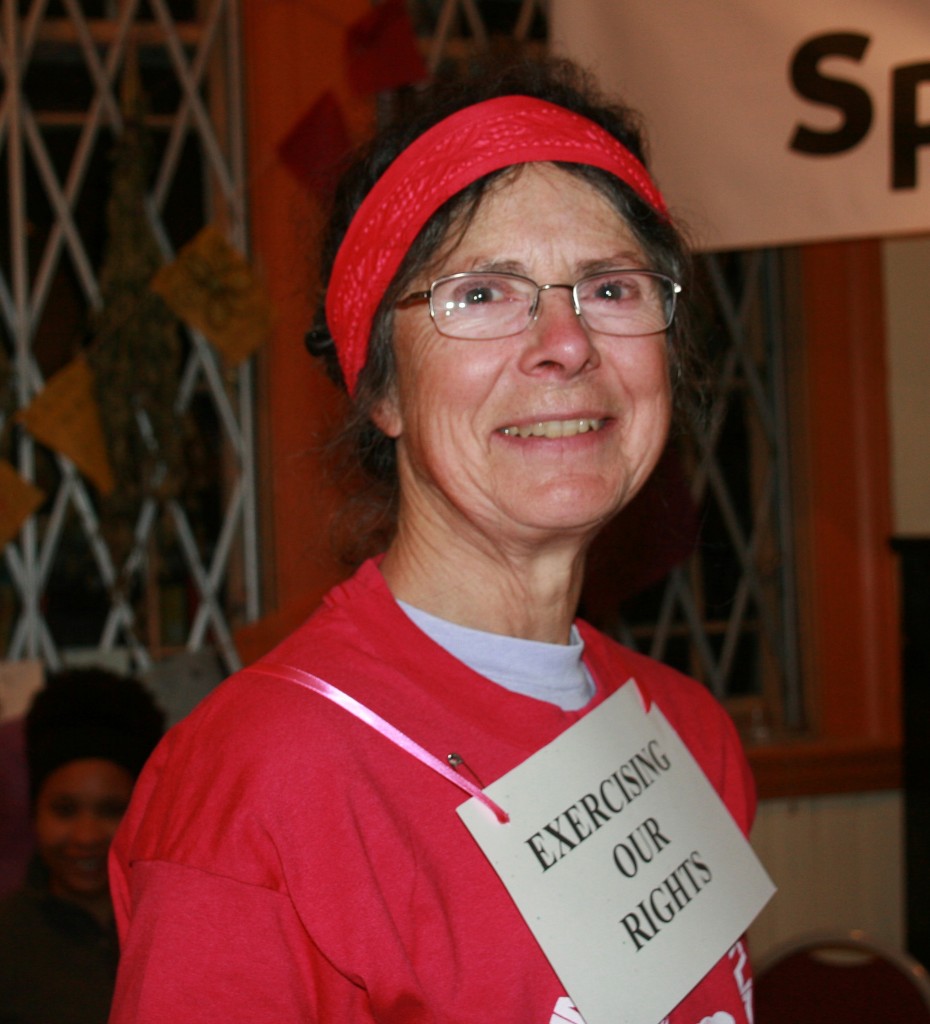 Priscilla at the Sanctuary, photo by Mark Klein 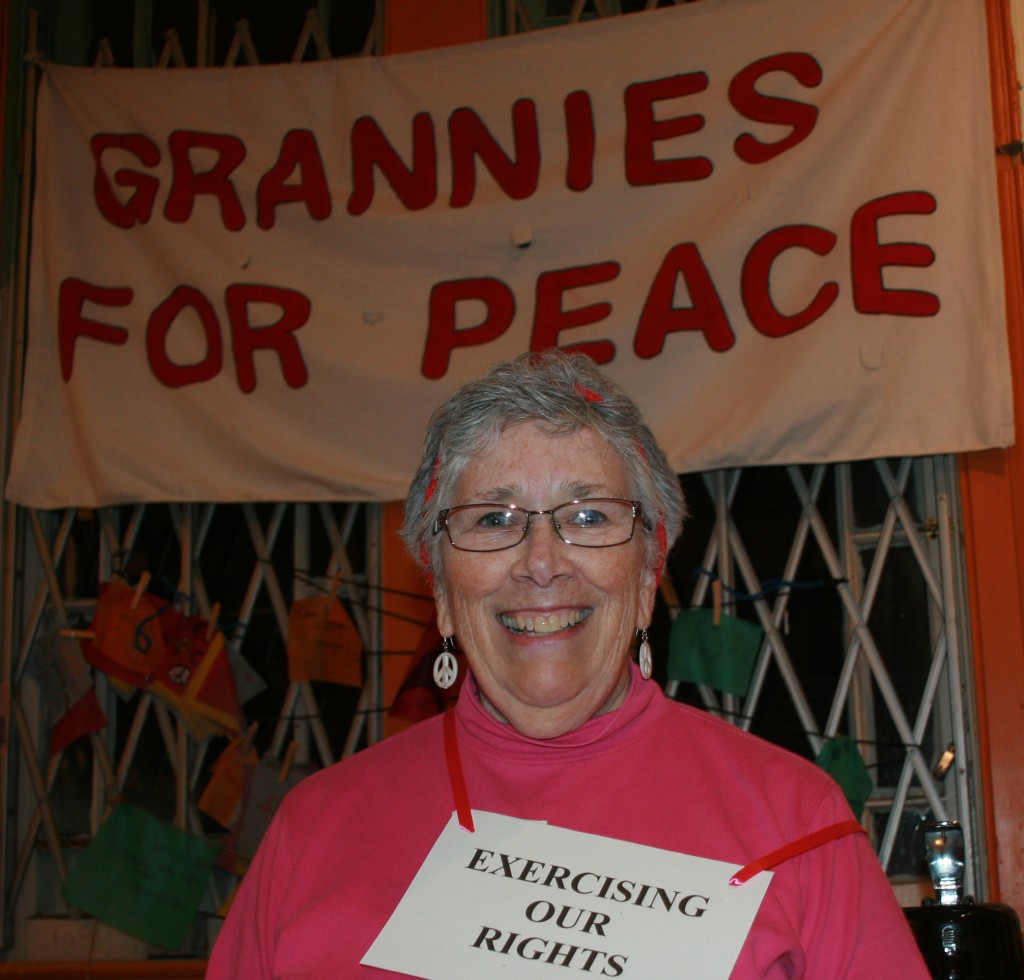 Anita at the Sanctuary with Grannies banner, photo by Mark Klein 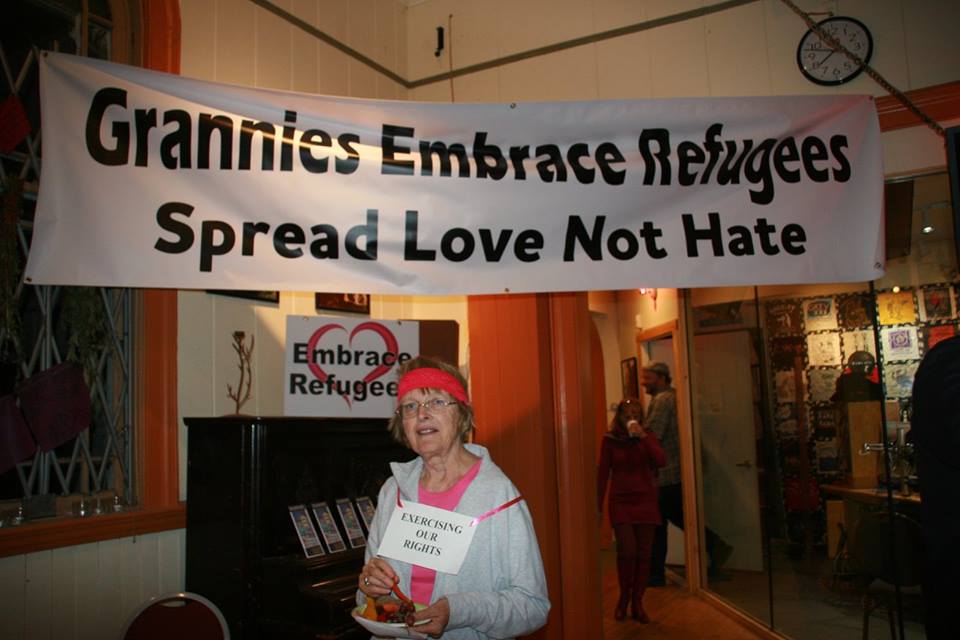 Hazel at the Sanctuary, photo by Mark Klein 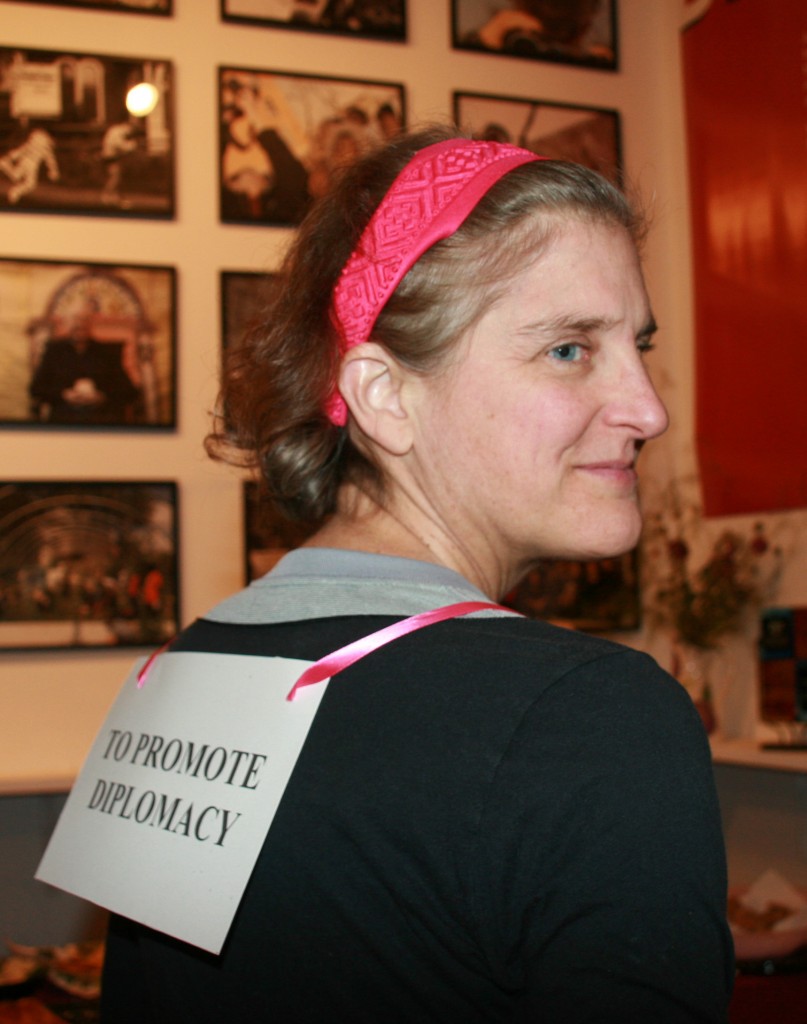 Elizabeth at the Sanctuary, November 19, 2016, photo by Mark Klein 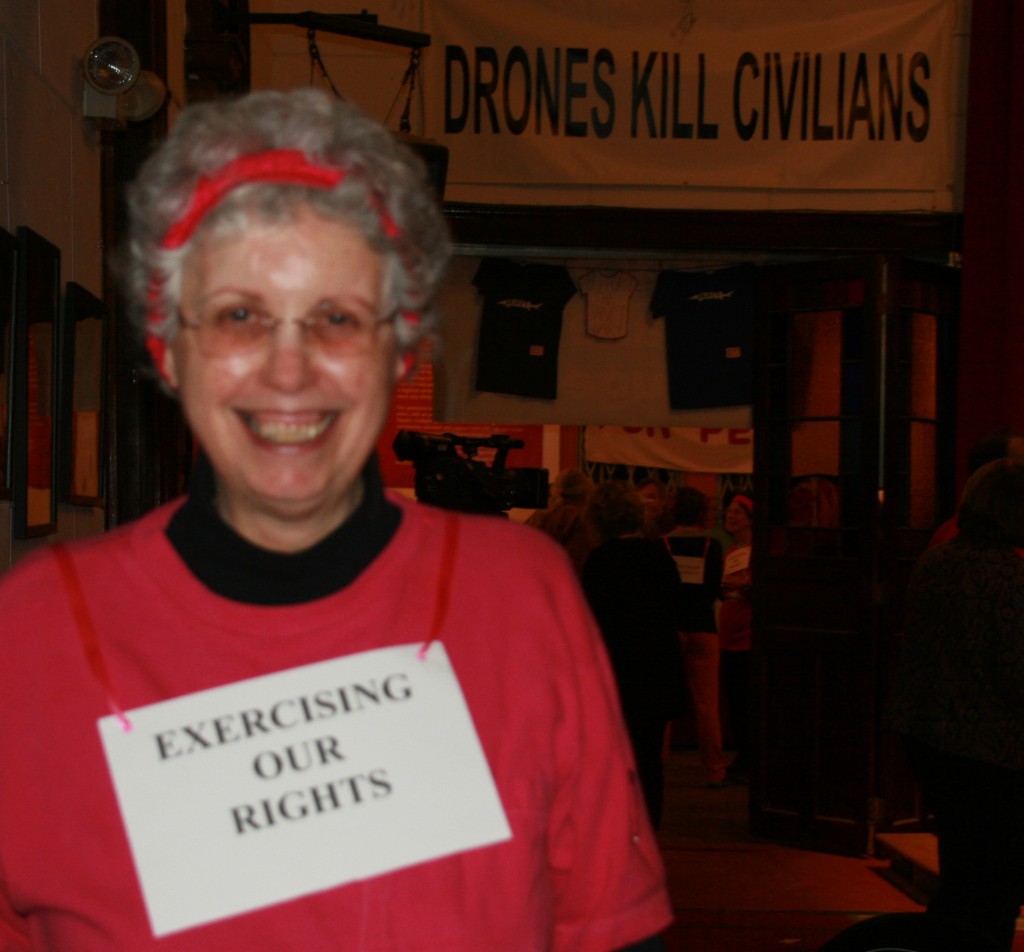 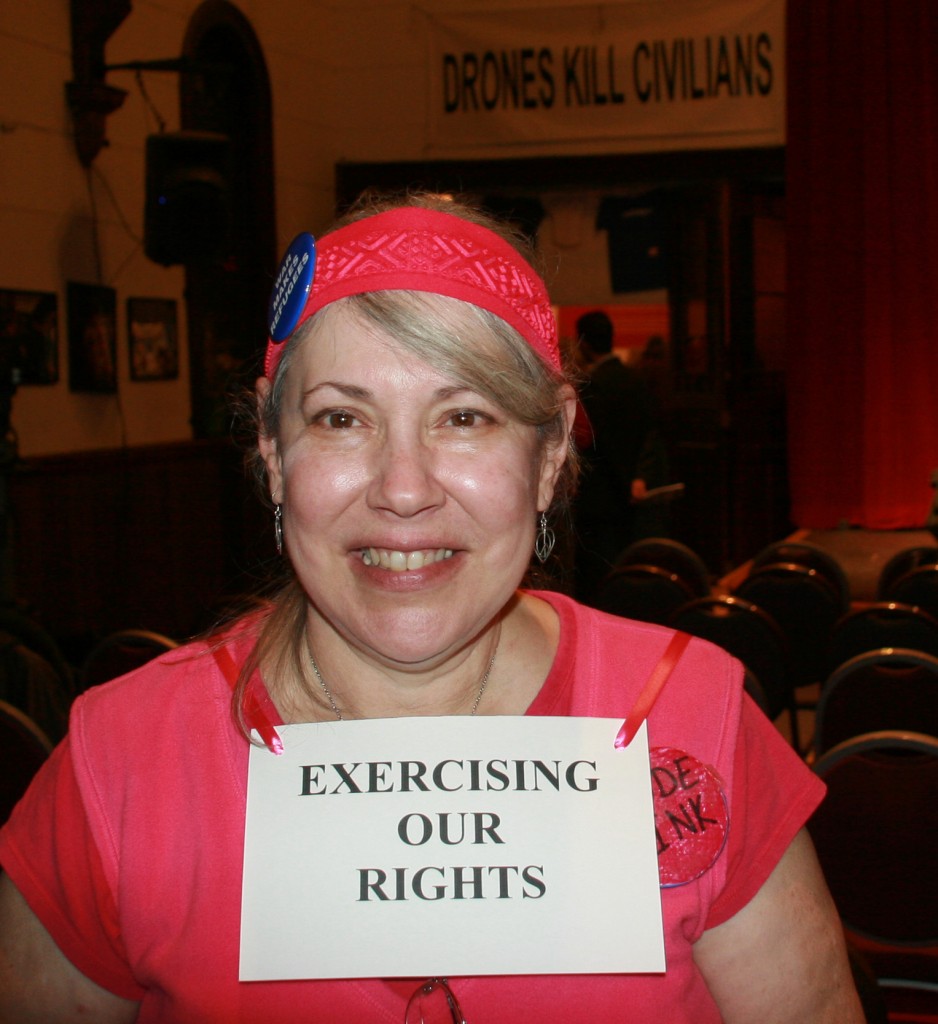 Elaine at the Medea event.Photo by Mark Klein 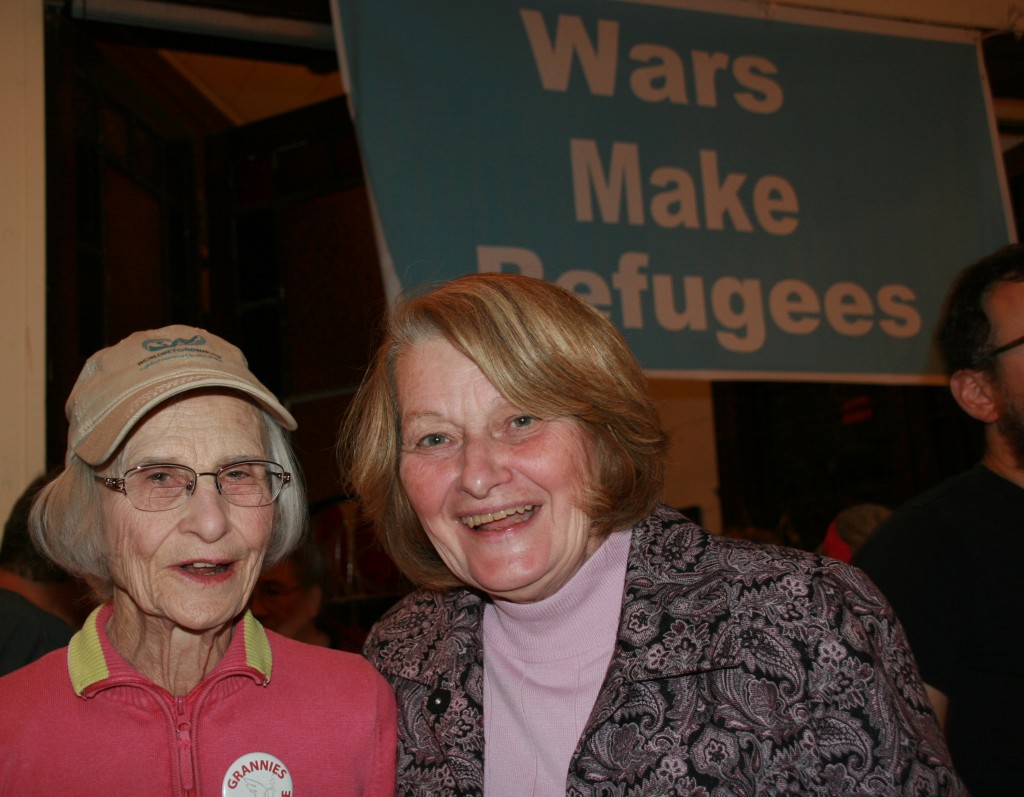 Maureen and Sue at the Sanctuary, November 19, 2016, photo by Mark Klein

A couple of pictures of the “working out crew” by Chris Auer: 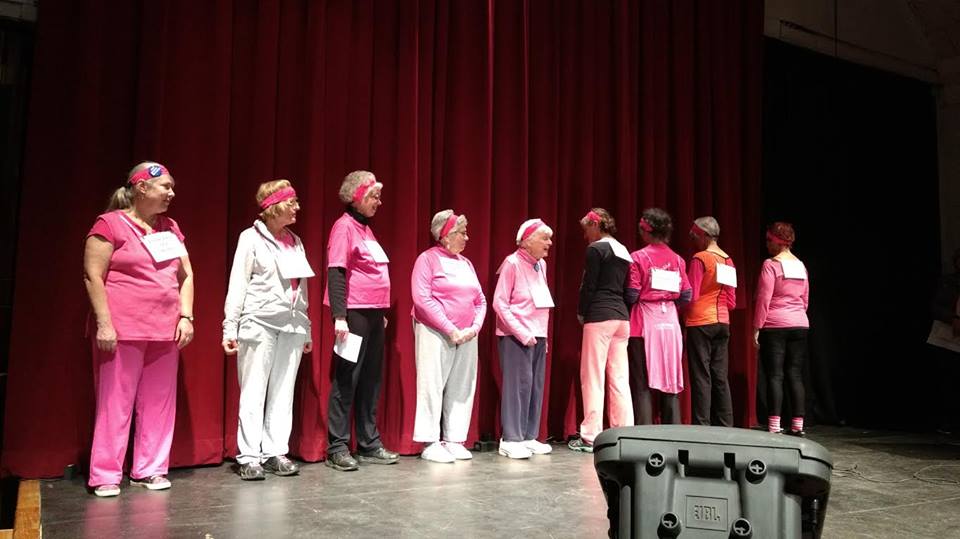 Rights to exercise, displayed on backs of the working out for democracy” crew 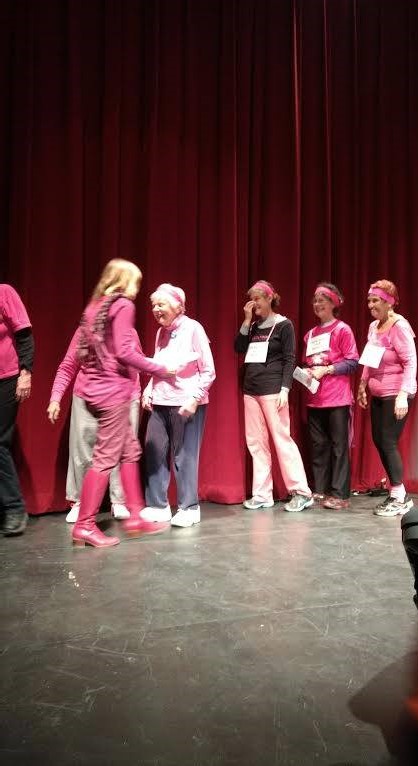 Medea works out with the exercise crew. Photo by Chris Auer

Exercising our rights to: